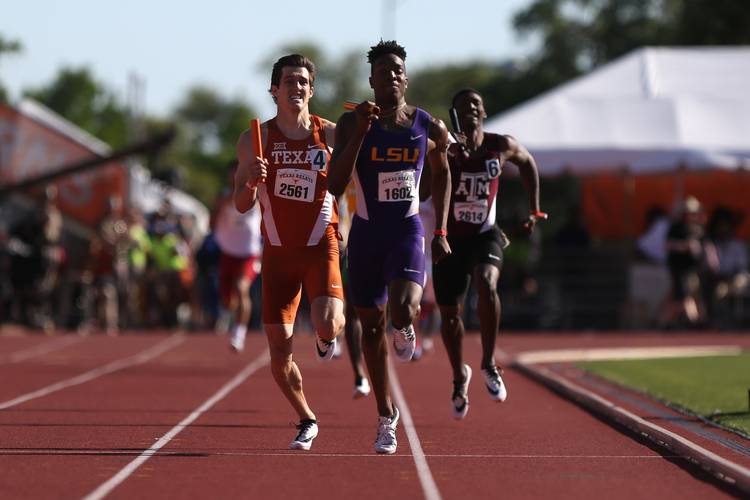 Back in 1983, John Elway was the No. 1 choice in the NFL draft, Michael Jackson was stressing about Billie Jean, and National Lampoon was going on vacation.

That year at Texas, the men’s 1,600-meter relay team set a school record at the Texas Invitational.

Amazingly, that mark — 3 minutes, 03.33 seconds — stood firm 33 years later. That is, until Saturday, when Chris Irvin, Byron Robinson, A.J. Bailey and Zack Bilderback conspired to replace it on the final day of the Texas Relays.

Oddur Sigurdsson, a member of that record-breaking 1983 squad, stuck around for the final event and saw Texas rewrite the record book at 3:02.18. LSU, whose Jaron Flournoy held off a late surge from Bilderback, edged the Horns in 3:01.83.

“To end the meet, that’s what the fans come for,” UT coach Mario Sategna said.

Bilderback, the lone senior on the relay unit, said it was pretty much inevitable that the record would come down at some point this spring, based on times posted in the indoor season.

“It’s not a surprise we broke it, but I’m happy we broke it this early,” Bilderback said.

All things considered, it was a successful day for Texas — with one notable exception. Freshman Teahna Daniels, the national indoor champion in the 60 meters, suffered a leg injury in the 400 relay and required medical attention. Daniels crumbled to the ground as she passed the baton to the second runner and was helped to a nearby medical tent, where she was put in an air cast. Sategna said the injury is to Daniels’ quad and that it was a “residual” from an awkward run she had earlier in the 800 relay.

A UT trainer said Daniels was evaluated, but results were unavailable.

With Daniels scratched from the 100, Morolake Akinosun cruised in 11.07 and became the first woman to win three consecutive titles in that event. The Relays began including women’s events in 1963.

“I realized midway through the training season that I could be the first one to do that,” Akinosun said. “We’ve had some of the greatest track and field athletes to come through the University of Texas, and this meet, so it’s an incredible feeling.”

Akinosun added a second championship in the 1,600 relay, along with Chrisann Gordon, Ariel Jones and anchor Courtney Okolo. They won in 3:26.54, smoking runner-up Arkansas (3:32.00).

On the men’s side, Senoj-Jay Givans said he was disappointed in his performance despite finishing second in both the 100 (10.08) and the 400 relay (39.18, fourth in school history).

In the 100, Givans fell to Clemson’s Tevin Hester, whose 9.99 seconds was wind-aided.

Former Longhorns Ashley Spencer (sprints/hurdles) and Jacob Thormaehlen (shot put) are making changes to their training regimens in hopes of earning spots on the U.S. Olympic team. Thormaehlen, the NCAA indoor runner-up in 2012, got the itch to compete after three years away, so he left his job as a sales rep (his boss was in attendance Saturday) and began training again at UT. He took third with a top throw of 63 feet, 2¾ inches, which is more than four inches shy of the qualifying standard he is chasing.

“I’ve been doing it in practice, and I thought maybe I could pull it together and put it into the meet,” he said. “The strength and everything is there. Just got to make sure I do it.”

Spencer, who won two NCAA 400-meter titles at Illinois before transferring to Texas, is experimenting in the 400 hurdles and finished first (56.80) in the invitational division Friday night. On Saturday, she took second in the 200 (23.50).

Spencer, who is sponsored by Nike, said she is not necessarily forgoing the 400 for good, and that she hopes to make the Olympics in more than one event.

“The 400 is still something I’m going to compete in, but when we get closer to trials, we’ll have to make some decisions,” she said.

Texas Relays: Morolake Akinosun has a new friend to challenge her in the 100