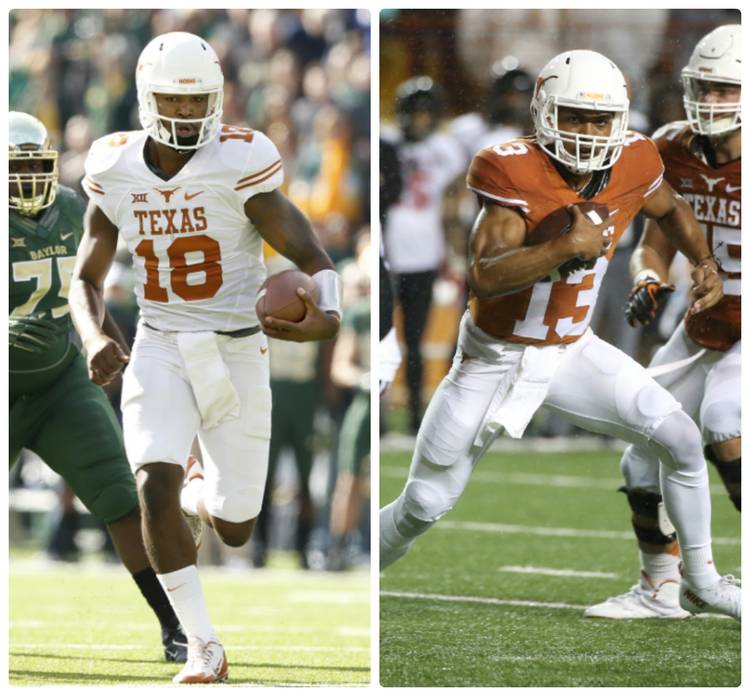 Who should be Texas' starting quarterback in 2016? Tyrone Swoopes (left) will be a senior. Jerrod Heard (right) will be a sophomore. What about Kai Locksley, Matthew Merrick or incoming freshman Shane Buechele? (Photos by American-Statesman staff)

Texas coach Charlie Strong hoped to choose a starting quarterback by the end of spring practice. He had a decidedly different tone Tuesday.

“Well, the competition is very good,” Strong said. “I don’t know if by the end of spring there will be a guy.”

Tyrone Swoopes is playing well, as one would expect from a veteran with 30 games under his belt. Freshman Shane Buechele “is like a gym rat,” Strong said. “He’s always around, always learning.”

But Jerrod Heard, who started 10 games last season, will not practice again this spring after falling awkwardly in practice and suffering a sprained shoulder.

The three-man race will likely continue beyond the spring game on April 16 and stretch into the summer. “You allow them to compete and play its way out,” Strong said. “If we have to go into fall camp, that’s what we’ll do.”

The Longhorns have completed 10 of their NCAA-allowed 15 practices. Strong said Heard will not return to practice this spring, but if there was more time, he would. So now, the sophomore-to-be is confined to learning the new offense in classroom settings while Swoopes and Buechele battle it out on the field.

Swoopes is “mature and much better now,” Strong said. “He’ll improve. That just comes with age.”

As for Buechele, Strong said, “I would not be afraid to start him at all, because I know he would go out there and compete and do what we ask him to do.”

Watching Johnson: Freshman receiver Collin Johnson has made an impression this spring with various one-handed acrobatics. The 6-foot-6 playmaker could be a strong candidate to start opposite returning starter John Burt.

“He has height, he has speed, he can catch the football, does a really good job with total body position,” Strong said. “He makes those catches and makes the tough catches.”

Find a kicker: Evan Moore and Jon Coppens, unknowns at this point, are the only two kickers listed on Texas’ spring roster. Moore, a sophomore, was 7 for 8 on field-goal attempts as a high school senior at Aubrey. Coppens was 8 for 10 as a senior at Fort Worth Nolan Catholic.

Someone must step in for the departed Nick Rose, who had the highest percentage of touchbacks (.746) in the Big 12 last season.

“Well, we have to find us a kicker. That’s an issue right now,” Strong said. “We have some guys that are lining up and kicking the ball. We have to be more consistent.”

Young being sued: Vince Young is being sued by a woman who claims the former Texas quarterback assaulted her by pulling her hair during a car ride after a 2014 NCAA Tournament game, according to TMZ Sports.

Tiffany Cayo is seeking $250,000 in damages, according to court documents. However, an attorney representing Young told Horns Digest the lawsuit is “a clear attempt to extract money from Mr. Young.”

Young’s lawyer issued a statement to Horns Digest stating Cayo first made the allegation to Young privately a year ago. Young’s legal team then interviewed witnesses, who claimed the alleged incident did not happen.

Young’s attorney said the quarterback will file a defamation lawsuit against Cayo and that when the dust settles, “Ms. Cayo’s claims will be roundly disproved and Mr. Young will be vindicated in all respects.”