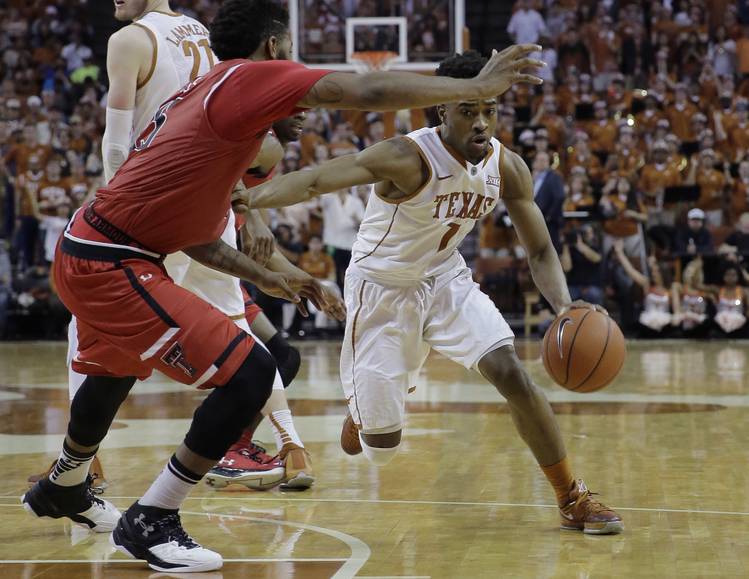 “I have decided to enter my name in the 2016 NBA Draft,” junior Isaiah Taylor said in a message posted to his Instagram account.

“I will not be hiring an agent at this time,” the point guard added. “I am eager and excited to start the process and begin working towards a lifelong dream.”

When the news reached Taylor’s mother in Hayward, Calif., “Of course, it hit me like a ton of bricks,” Loretta Perkins told the American-Statesman.

“With whatever decision he makes, I’ve always told him that I would support him 100 percent either way,” Perkins added. “Right now, as a parent, I’m teeter-tottering. This is a real scary moment for a parent, because you do’t know what the outcome will be. You can only hope for the best.”

Perkins believes every decision Taylor has made so far has been correct. Like when he pushed to leave California and enroll in The Village School in Houston. Or when he chose to continue his basketball career with then-coach Rick Barnes at Texas.

Perkins was ecstatic when Taylor stayed with the Longhorns after an uneven sophomore season and coaching change. Taylor missed 10 games with a broken wrist, rushed back before he was fully healthy and averaged just 12.8 points in Big 12 play.

The slashing scorer known for his mid-range floater posted career-high numbers under first-year coach Shaka Smart. Taylor shot 42 percent, and averaged 15 points and five assists per game. He buried game-winning shots against Stanford and Kansas State and rang up a career-high 35 points at Texas Tech.

Those inside the program did not expect him to return. Still, by not hiring an agent, Taylor at least keeps his eligibility intact while he surveys the landscape.

Thanks to new NCAA rules enacted in January, college players have until May 25 — 10 days after the NBA scouting combine — to make a final decision. However, players must be invited to the combine. It’s possible Taylor may need to hire an agent to get there.

“He has a pretty level head on his shoulders, not to allow other people to influence him,” Perkins said. “He has to do this for himself and no one else. This is not something he has to do for his friends, his family, his mom or his dad. This is Isaiah Taylor’s decision.”

Smart joins Team USA: In what could be a recruiting coup, Smart was named the head coach for USA Basketball’s Under-18 team that will play in Chile this July. Connecticut’s Kevin Ollie and Maryland’s Mark Turgeon will serve as assistants.

Smart was recruiting in Virginia on Thursday and was not made available for comment. The men’s under-18 team will vie for its fourth straight gold medal at the FIBA Americas Under-18 championship.

By serving as head coach, Smart will preside over two training camps to select from among the best high school players in the nation. One camp will be held in Colorado Springs (June 14-18) and another in Houston (July 11-15).

“It’s a tremendous honor to coach the USA U18 National Team and represent our country in international play,” Smart said in a statement.