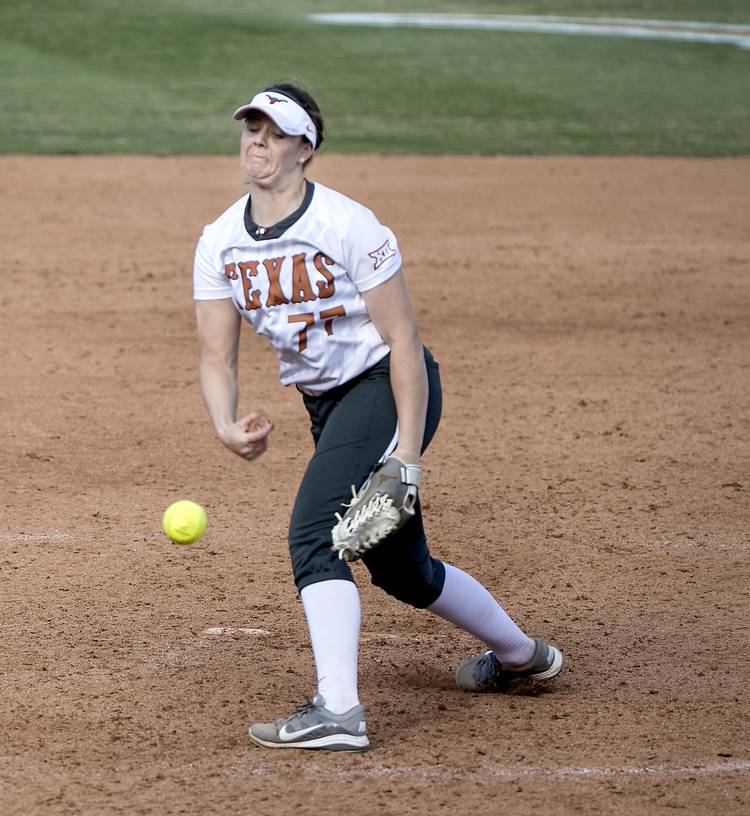 The collegiate softball season is more of a marathon than a sprint and to be successful a team needs to have different players peak at varied times as part of the team’s – and the individual’s – growth curve.

Now is the time to shine for Texas pitcher Paige von Sprecken.

Von Sprecken, a transfer from the University of San Diego, has turned into a key player for the Longhorns.

When Texas (25-9, 0-2 in Big 12 play) hosts Texas Tech for a three-game conference series beginning Friday, von Sprecken is set to make a huge contribution, both in the circle and at the plate.

Von Sprecken has fashioned a 9-1 record this season with one save and a 2.26 ERA. She’s been on fire in the circle in herlast four appearances , winning both her starts with complete games, a 0.00 ERA in a career-best 12 straight scoreless innings while also posting a .583 batting average at the plate.

“Paige has been a real sponge,” she said. “We needed a pitcher that could give us some innings, in a starting or relief role, and Paige been all that and more.

“Confidence has been the key for her. She needed the extra work because even though she’s pitched at the collegiate level before it was not at this level. She’s attacked the zone and she’s learned to trust her stuff.”

Von Sprecken said she’s at her best when she keeps things simple.

“I’m just trying not to think,” von Sprecken explained. “If I get in my head, that’s when I start overdoing it and trying too hard. I’ve just been playing the game that I want to play.

“Coach Clark has worked with me to maximize my pitches,” she added. “I’ve been working on drop ball – which I never really had before – and I’ve been able to throw my changeup consistently. Those have been the biggest keys for me.”

Whether she’s starting or coming in for relief, von Sprecken is focused on being prepared.

“I just try to be ready all the time and coach Clark does a great job of letting us know when we need to get ready if we are pitching in relief,” she said. “I try to stay in the game as much as I can when I’m not playing.”

Texas is riding a five-game win streak since losing three straight games, including its first two Big 12 games on the road against Baylor. Texas Tech (18-19, 3-0) took two of three games from the Longhorns last season in Lubbock, and they will have Texas’ full attention.

“We just need to keep playing the way we are playing and hitting the ball,” von Sprecken said. “As long as the pitchers are pounding the strike zone we will be successful. We are all accepting the roles we are in and stepping up when we are asked – we are truly a team because we use everyone in the dugout.”