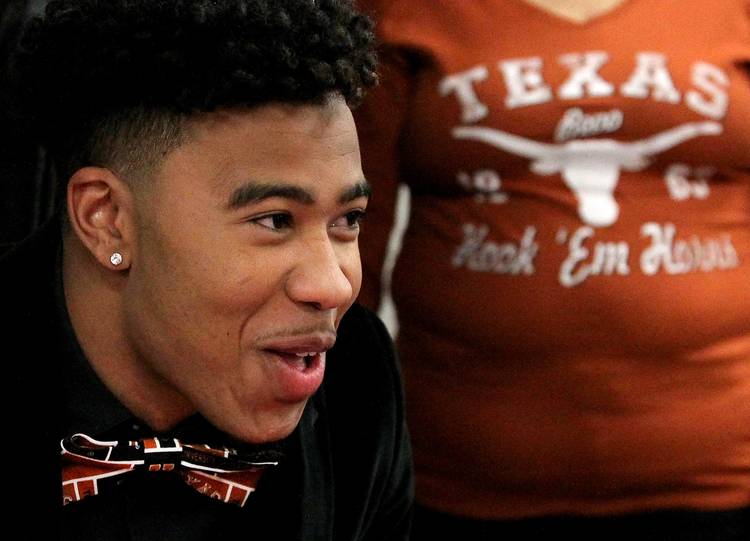 Waco defensive back Eric Cuffee reacts to signing with the Longhorns on national signing day in February. (Rod Aydelotte/Waco Tribune)

WACO — Folks at Waco High like to regale with stories about Eric Cuffee’s pristine reputation at the school.

Told that a troubled boy was in need of guidance, Cuffee accepted a mentorship role, and in a matter of a few months has steered the freshman into better conduct. Cuffee, the star cornerback who has signed to play at Texas, has been known to visit local elementary schools on the eve of STAAR testing and encourage students to get a good night’s rest and to eat breakfast.

An A student who was honored as academic all-state, Cuffee positions his desk in the corner of classrooms to eliminate distractions from the day’s lesson.

There’s simply not much dirt to uncover.

“He’s avoided making the wrong decision because he’s always known where he wanted to be one day and didn’t want to prevent himself from getting there,” Waco coach Marty Herbst said.

Which should clear Cuffee of the teeny, tiny lie he and his father told to get him into a youth football league when he was 5.

To play tackle football for the YMCA in east Waco, boys had to be at least 7. Cuffee was big for his age, so his father — the team’s coach — bent the rules a bit and brought him on as running back and defensive end. Cuffee continued to play against older competition for several years without any pushback.

“I guess no one ever figured that out,” Cuffee said.

It doesn’t much matter now. Cuffee is six weeks away from driving 90 miles down I-35 to fulfill his dream of playing major college football and advance his family’s impressive football pedigree, which begins with his father, Eric Sr., who had a brief stint with the New Orleans Saints in the 1980s after finishing up at North Texas. Three of Cuffee’s distant cousins played last season in the NFL, including two with the Tennessee Titans — former Oklahoma State defensive back Perrish Cox (Waco University) and former Missouri linebacker Zaviar Gooden (Pflugerville), who was released in September. Another cousin, A.J. Bouye, is a defensive back with the Houston Texans. Also residing somewhere on the branches of the family tree is former All-Pro cornerback Dre Bly.

So Cuffee, a four-star prospect and the state’s No. 35-ranked player on the American-Statesman’s Fabulous 55, has some work to do to live up to his family lineage. At Texas, he’s being slated, at least initially, to add depth behind sophomore corners Holton Hill and Davante Davis, yet if needed, Cuffee also has the size (6 feet, 187 pounds) and some game experience to get involved at safety.

“I look forward to the competition,” Cuffee said. “Competition is what I like.”

Cuffee’s profile is the 17th in our series highlighting the Longhorns Class of 2016. To catch up on the rest of the series, here’s an interactive map of Texas’ recruiting class of 2016.

Beyond the little fib about his age, Cuffee has another secret to share. Had he passed a test that would’ve cleared him to graduate midway through his senior year, he would’ve enrolled early — and probably chosen Texas A&M. The Aggies were his frontrunner last December at which time Cuffee learned about his insufficient test score.

Feeling as if Texas “made me feel at home,” Cuffee eventually rearranged his order of schools and picked the Longhorns about a week before signing day. He was among three defensive backs the Longhorns signed, with safeties Brandon Jones (Nacogdoches) and Chris Brown (Alief Elsik). The three of them will play for new defensive backs coach Clay Jennings, a product of Waco La Vega who tried to recruit Cuffee to Arkansas.

“I’m glad it unfolded the way it did,” Eric Sr. said. “From the first day I met Charlie Strong and his coaching staff, I felt that it would be a good fit for Eric. I like what Strong’s doing with his program as far as disciplinary action he has taken.”

Had Cuffee earned that required test score and graduated early, a troubled boy at Waco High would’ve been deprived of a mentor. The story goes that the school’s assistant principal, Paula Gifford, pulled Cuffee aside maybe three months ago because the freshman was acting up and had no positive male influence. Gifford had a feeling that Cuffee, who she barely knew but whose reputation of which she was aware, could succeed where others had failed to reach the kid.

Within 30 seconds, Cuffee accepted the challenge, and he and the freshman have since grown close, bonding over trips to the movie theater.

“Anything he needs me to do,” Cuffee said.

Gifford said the student’s behavior has improved by “70 percent.”

“He is never ever quiet, but he’s quiet when he’s with Eric because he’s so awestruck,” Gifford said.

As WNBA draft arrives, Texas’ Imani Boyette prepares for next step in the ‘family business’