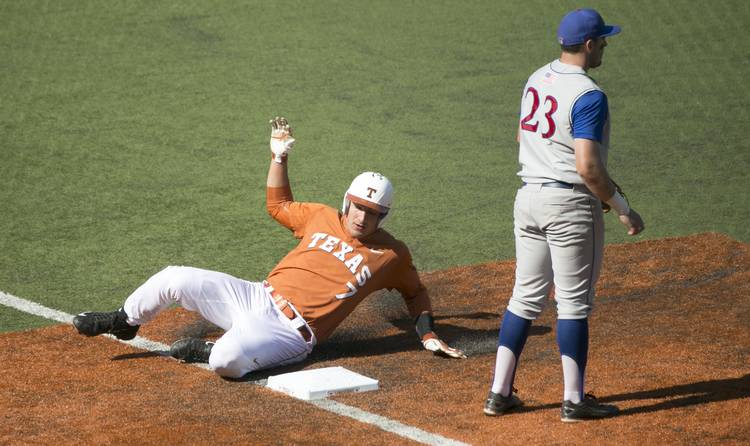 Joe Baker couldn’t wait to return from a leg injury and rejoin the Texas lineup, so he anxiously swung at the first pitch he saw Friday.

It scooted for a single up the middle, a promising development for a player who hadn’t been able to contribute anything to his club since suffering a leg injury March 19.

Yet even with the return of Baker, arguably the team’s best pure hitter, Texas is still a flawed bunch, which was evident in its 20th loss, an 11-5 clunker to Kansas.

Baker, who made outs in his final three at-bats, has battled various leg and elbow ailments throughout his sophomore season, and his absences have probably cost the Longhorns (14-20, 5-5) a win or two along the way. He was the designated hitter and batted sixth in the first game of Friday’s doubleheader, and he could be a fixture in that spot unless coach Augie Garrido cares to tinker with his defense and remove second baseman Zane Gurwitz from a position at which he’s excelling.

What to do with Baker is a welcome distraction from the team’s more severe issues, such as why Kansas (14-18, 3-6) was able to march into UFCU Disch-Falk Field and pound out 15 hits or why Texas couldn’t score over the final five innings after initially engaging in a back-and-forth shootout. After putting up two runs in the fourth, UT managed just four base runners the rest of the way, and one of them — Travis Jones — was caught leaning and was picked off of first after a single to start the seventh.

Kansas starter Ben Krauth pitched all but the ninth and struck out nine batters, the sixth outing in a row he has reached that total. Kody Clemens, Gurwitz and Patrick Mathis each fanned twice.

Krauth, a lefty who entered with a 2.24 ERA, is an outlier for the Big 12’s worst pitching staff, which came into the series with a 5.38 ERA. That bodes well for Texas, which tends to get flummoxed by above-average pitching.

Though it’s a small sample with 55 at-bats, Baker (.309) is leading UT at the plate. He’ll need some help from others if Texas, which entered the day third in the Big 12 standings, hopes to make any sort of push before the conference tournament.

UT starter Morgan Cooper (2-2) tied his season high with eight strikeouts but could never get into a groove. He was on the mound when Kansas scored two runs each in the third and fourth innings before tacking on three in the fifth on Devin Foyle’s two-out, bases-loaded liner inside the left field line.

Foyle, who totaled five RBIs, was the last batter faced by Cooper, who allowed seven runs — five of them earned.

For Texas, Tyler Rand had two hustling doubles, a trademark for the freshman center fielder. He drove in a run, as did Jones, Kody Clemens, Kacy Clemens and Michael Cantu, who is finally starting to make good contact.

Baker, meanwhile, ran hard on a couple of groundouts, showing no signs of the stress fracture he suffered nearly a month ago against Tulane when he collided with the first base umpire.

Kansas improved to 2-7 on the road.

Texas evens series with Kansas behind blasts by Gurwitz and Barrera