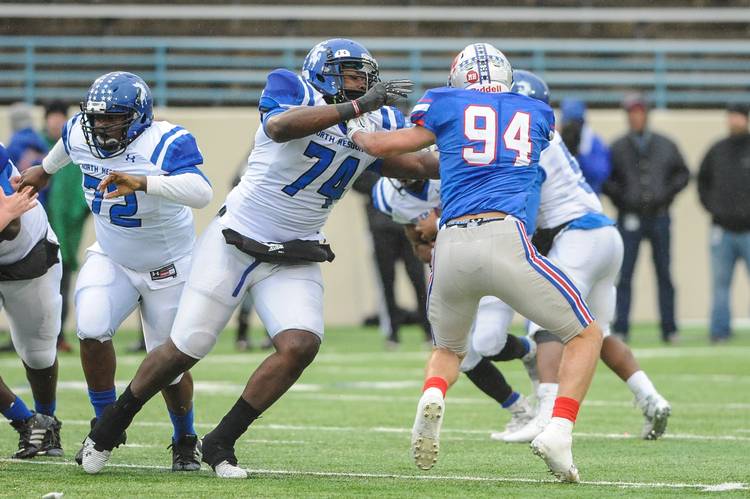 MESQUITE — Some college coaches tell recruits exactly what they want to hear, and they can charm Mom and Dad. But it’s hard to fool human lie detectors like Avis King, a 60-year-old Southern Baptist from Georgia.

King is not someone Texas coach Charlie Strong could snooker. In 2010, she was given a five-year outlook against multiple myeloma, a rare cancer that affects the production of normal blood cells. Six years later, the disease is still here, but so is she.

“Like I told him, I’m counting on him being real,” King said. “I don’t want to put my walking stick on him.”

Jean Delance, the North Mesquite offensive lineman who was one of this year’s best recruits in the state, had to get his grandmother’s blessing before he signed with the Longhorns.

Delance’s profile is the 18th in our series highlighting the Longhorns Class of 2016. To catch up on the rest of the series, here’s an interactive map of Texas’ recruiting class of 2016.

Delance originally committed to Oklahoma early in the process. But he backed out of that pledge once a video surfaced in March 2015 of OU fraternity members singing a racist chant on a bus. The university took swift action, cutting ties with the Sigma Alpha Epsilon fraternity and banning the group from campus. “Very uneducated people,” Delance’s mother, Altavian, said at the time.

Jean Delance reopened his recruitment, and by last December, he presented three schools to King — Texas, LSU and Michigan.

“Coach Strong had an ever-lasting impact. That was their argument,” Delance said of his family’s guidance.

“For us, Texas is home,” Altavian Delance said.

After she prayed about it, King said Texas was the right place. She’d secretly been getting information about UT during her weekly chemotherapy trips, listening to others talk about the school at the medical facility. Everything checked out, so how’d that make her feel? “Awesome, awesome, awesome. I’m pleased,” King said.

Standing 6 feet, 5 inches tall and weighing 290 pounds, Delance wants to play immediately. He’s motivated by Patrick Vahe and Connor Williams, two linemen that started right out of the gate last year and became freshmen All-Americans. Delance expects to work his way into the rotation at right tackle, but he ultimately wants to play on the left side.

“To play this game, you have to be physical, you have to have a strong mentality and you’ve got to play as a family, not as a team,” Vahe said. “I like this group (of freshmen), so we’ll see what happens.”

Both Vahe and Williams have a mean streak, and it sounds like Delance does, too.

As a sophomore at North Mesquite, Delance got himself ejected from the Stallions’ 2013 season opener against Rowlett, a team featuring future UT signee Charles Omenihu at defensive end. Delance got into it with a defensive tackle.

“I just did him nasty, and the dude, I put him on the ground,” Delance said. “Then I had to get a little extra jab in.”

North Mesquite coach Mike Robinson could have let Delance back onto the field the following week. Instead, Delance was essentially benched — for the rest of the year. He didn’t play until the last five or six minutes of each game. “Big games, too. Our rivalry game against Mesquite High School,” Delance said, “I probably played 30 seconds.”

“One of the things we talked about was that if someone allows you to do what you want to do, then you’ll never be held accountable for anything,” Robinson said. “You can’t run from situations. You meet them head on and you work through them.”

Delance stayed, and North Mesquite found its stride. The Mustangs went 10-3 last season and tallied more than 400 yards in seven games. Delance landed 13th on the American-Statesman’s Fabulous 55 list and was considered the nation’s 12th-best offensive tackle, according to 247Sports.

Like other recruits, Delance isn’t swayed by UT’s 11-14 record over the last two seasons. He sees the Longhorns with a brighter future. Delance wants to be a part of it.

Another Texas spring game, another year with quarterback questions