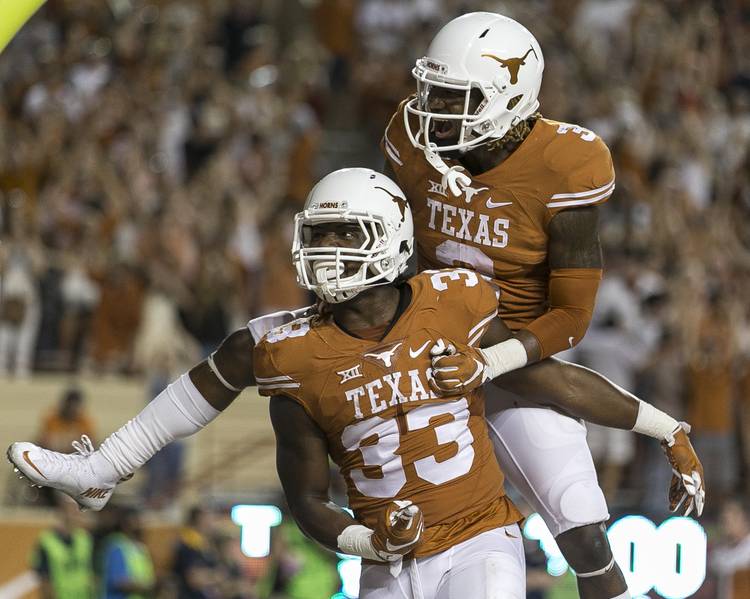 Here are 10 non-quarterbacks to keep an eye on during Saturday’s Orange-White spring game at Texas:

Armanti Foreman, WR — The time is now for the flashy but inconsistent pass-catcher, who is entering his third season with his third position coach. Foreman, who arrived to campus looking like an eventual star, laid a dud in 2015 with 11 catches.

Brandon Hodges, G — The 2015 junior college transfer never figured things out last year and redshirted. A change in coaches from Joe Wickline to Matt Mattox has provided a positive boost, and Hodges now is projected to start at left guard.

Charles Omenihu, DE — Up about 25 pounds from when he stepped onto campus last fall and has transitioned from a stand-up linebacker to a hand-in-the-dirt end. In theory, Omenihu will become the pass-rushing force the line is currently lacking.

Collin Johnson, WR — Early-enrollee was the team’s best receiver from his very first practice. That speaks to both the rare gifts possessed by 6 feet, 6-inch Johnson, but also to the team’s unproductive veteran receivers.

D’Onta Foreman, RB — Makes the move from the hunter in 2015, when he was taking carries from veteran Johnathan Gray, to the hunted with Chris Warren III lurking. Ideally, they’ll coexist to form one of the Big 12’s top backfields.

DeShon Elliott, S — A freak preseason injury sidelined the promising freshman for the first five games of 2015. If he can live up to his recruiting hype, he’ll be a threat to multi-year starters Dylan Haines and Jason Hall.

Malik Jefferson, LB — He’s trying to make the leap from freshman All-American to defensive leader. He was miscast a year ago at middle linebacker and won’t truly realize his potential until he’s moved onto the edge, where he can get to the quarterback. Who can forget last year’s spring game when Jefferson made a rollicking introduction with a forced fumble of Daje Johnson and a backfield takedown of D’Onta Foreman?

Poona Ford, DT — Now entering his third season, Ford must continue to progress and help solidify a position that opposing backs carved up last year when Hassan Ridgeway wasn’t in the game. Five newcomers arrive in the summer, but there’s no reason Ford should let any of them pass him on the depth chart.

Sheroid Evans, CB — The sentimental pick that’ll make for a feel-good story if he can make it through the season uninjured. A sixth-year senior, Evans has not appeared in a game since suffering his first of two ACL tears on Oct. 3, 2013 at Iowa State. To illustrate just how long Evans has been on campus, he was in the same UT recruiting class as Quandre Diggs, who’s entering his second season in the NFL with the Detroit Lions.

Zach Shackelford, C — The way it stands, the true freshman will start at center. Shackelford, of Belton, has a nasty side, but he’ll also need to be savvy to hold up at a position of such responsibility.

Joe Baker’s back, but Texas falls to Kansas, drops 20th game of season