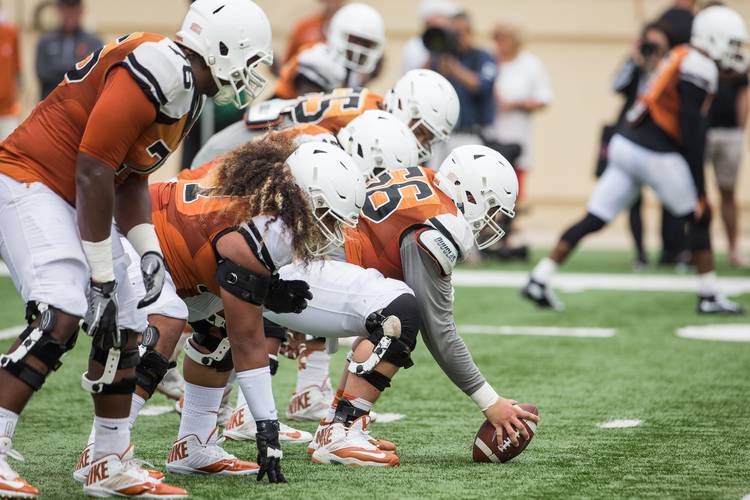 Texas offensive coordinator Sterlin Gilbert wouldn’t say so for sure, but it sure looks like he’s settled on a starting offensive line.

Gilbert said he wanted to consult with line coach Matt Mattox before making an announcement.

“We’re getting close,” Gilbert said. “There are seven of those guys that are right there in the mix pretty heavily.”

The best guess is the sixth and seventh guys Gilbert was referring to are guard Elijah Rodriguez and tackle Tristan Nickelson.

The first-team line opened up things for Chris Warren (seven carries, 101 yards) and D’Onta Foreman (nine carries, 73 yards). Both of them scored on the ground, including Warren’s 51-yarder.

Depth on the line remains an issue, and head coach Charlie Strong said he hopes he’ll have a solution with the arrival of 2016 recruits Jean Delance, Tope Imade and Denzel Okafor.

“Gotta get some more depth on that offensive line,” Strong said.

No snaps for Locksley: Most impacted by the second half getting cut by rain was third-string quarterback Kai Locksley, who was ticketed to play late in the game but ended up not playing at all.

Locksley appeared to mope on the sideline, wrapping a towel over his head. Shortly after the game, he fired off two tweets that leaves one to wonder if he’ll considering transferring.

Strong said Locksley, a redshirt freshman from Maryland, “will get his chances.”

“He probably would have played in the second half, but I didn’t know I was gonna have to call (the game for rain).”

Locksley has an uphill battle for playing time; he will likely be bumped down to fourth string once Jerrod Heard returns from a shoulder injury.

The only injury believed to be suffered during the game was to reserve offensive lineman Alex Anderson, who hobbled off of the field on the second series.

Johnson quiet: After being praised all spring, freshman wideout Collin Johnson didn’t do a whole lot, making four catches for 15 yards. He also dropped a ball in the end zone despite getting good position against safety Kevin Vaccarro.

No one seemed discouraged.

The 6-feet, 6-inch Johnson opened the spring running with the first-team offense, which is a clear sign that he’s expected to contribute this fall.

Short yards: LB Malik Jefferson did not start the game, and the reason he gave is the coaches wanted to give reps to the second-team. He had two tackles. … Antwuan Davis and John Bonney had interceptions, and Davis’ came on arguably the play of the game when he took the ball away from DeAndre McNeal as the two tumbled to the ground near the goal line. … Armanti Foreman pulled in a 27-yard catch over Holton Hill. … Michael Dickson averaged 45 yards per punt and uncorked a 65-yarder.