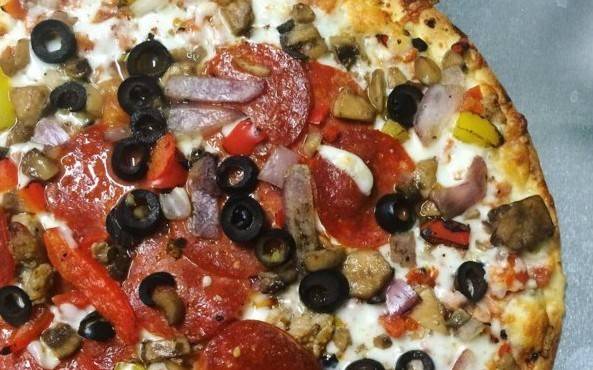 Austin's Pizza is now selling its popular pizzas, such as this Mopac pizza with pepperoni, Canadian bacon, bell peppers and black olives, in the frozen section of a number of H-E-Bs in Texas. The eatery won't be back to UT athletic facilities this fall, though. Photo by Addie Broyles

Kneading more dough from the dough, Texas and IMG officials may have used a rolling pin to flatten one local pizza owner.

Austin’s Pizza owner J.D. Torian admits he had only a one-year contract to serve cheese, pepperoni and deluxe pizzas at various UT athletic facilities like Royal-Memorial Stadium and Erwin Center. Pies were hot and fresh at Saturday’s spring game. But he claims he wasn’t given a chance to win the contract again for the 2016-17 academic year.

Torian started asking questions earlier this month after he learned school officials were in deep negotiations with DoubleDave’s Pizzaworks, an Austin-based chain known for its pepperoni rolls and “Aggie bloodline,” according to its website.

“I assumed (school officials) would have come to me with some increase, but we found out about all this mid-process,” Torian said Monday. “It really was the feeling on IMG and athletics’ part — judging by the conversations I was having with both at the same time — the feeling was ‘Oh, no. He found out.’”

In a statement provided to the American-Statesman, UT athletic director Mike Perrin said, “This selection was a fair and open process.”

Perrin acknowledged that some IMG contracts require a business component, not just a vending opportunity. To win the pizza contract, UT wanted a company to buy advertising (i.e. signage in venues) as well as serve food in the concession stands.

“After lengthy discussions with various interested parties on criteria for overall positive value for Texas athletics, an alternative vendor was selected for the concessions and promotional/sponsorship terms,” Perrin said in the statement. “We are grateful for this past year’s partnership but are moving along with what we feel is the best situation for Texas athletics.”

Torian said he paid $50,000 to IMG for last year’s contract. IMG later asked him to consider a $100,000 advertising deal inside the basketball arena, something Torian declined.

DoubleDave’s is willing to spend $75,000, according to those familiar with the talks. DoubleDave’s officials did not respond to an interview request. And Scott Willingham, general manager for Longhorn IMG Sports Marketing, declined to comment through an IMG spokesman.

Torian confirmed he did not want advertising as part of the initial deal. As for buying advertising to get a new contract, “I would say that’s true, but I could do it if I had to,” he said. “I would do what we had to do. That’s what I told IMG (last Thursday).”

At that point, it may have been too late.

At 11:53 a.m. last Friday, Torian received a text message from Willingham saying he appreciated Thursday’s conversation. “After reviewing the financial considerations and where we are in the process, we are moving forward with the new sponsor/vendor,” Willingham wrote in a text reviewed by the Statesman.

“I wish you the best and hope we get a chance to work together in the future under better circumstances,” Willingham’s text added.

This is no ordinary pizza maker IMG was turning away, either. Torian is the chairman of the UT library advisory council and actively solicits donations to the school’s library fund. Selling pizza inside Royal-Memorial Stadium is part of his sales pitch to donors.

“I will say this about Scott,” Torian said. “He was very good about explaining where they were coming from. It doesn’t mean I agree with the way they do business.”

The public may not hunger for details on pizza negotiations at UT. But it sheds light on how IMG conducts the business gathering and managing corporate sponsorships and advertising for the Longhorns. In some cases, IMG Sports will battle to protect contract details from leaking into the public domain. The company has successfully blocked, or at least slowed, media outlets from gaining contracts with information deemed proprietary.

For example, the Statesman sought full contract details on UT’s new agreement with Austin Radio Network. IMG Sports requested that certain information be redacted, and the information was received only after the Texas attorney general ruled in the Statesman’s favor.

“The painful part?,” Torian said. “We think it’s one way, but when you find out it’s real, to know and experience in a very visceral way, this is painful. It is all about money. As someone who is still engaged with UT, it’s hard to take.”