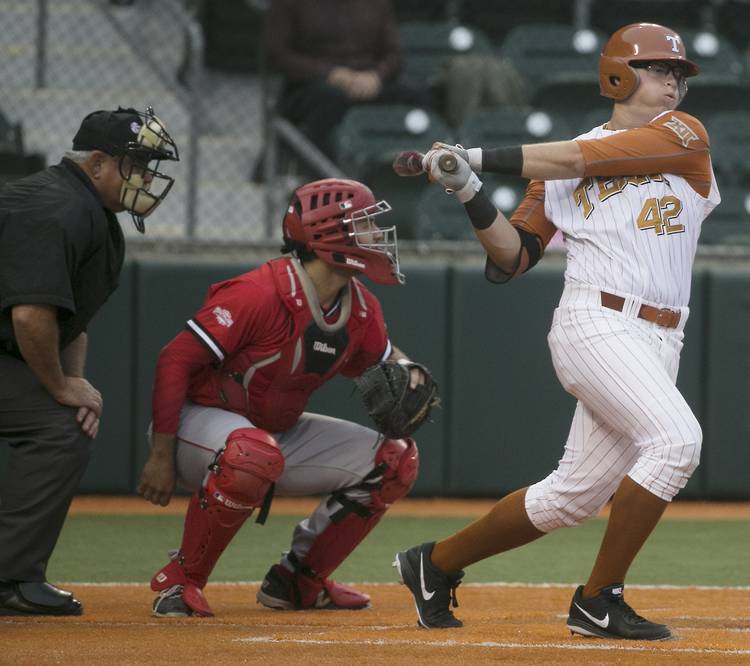 Augie Garrido is starting to sound a little crazy.

With 15 games remaining in the regular season, the Texas baseball coach is talking about perfection, saying openly this week that the Longhorns’ goal is to win all 15 of them.

“Can’t do it if you don’t get out there and go after it,” Garrido said.

It’s a vast departure from the one-game-at-a-time rhetoric spewed by most coaches and is a bold proclamation from a coach whose team has lost three more games than it has won and sits No. 138 in RPI. And should it happen, UT would finish the regular season on an 18-game winning streak after taking two games from Kansas last weekend followed by a midweek triumph over UT-Rio Grande Valley.

The chase for perfection continues this weekend at No. 10 Texas Tech, which knows a thing or two about a prolonged win streak after having recently put together 10 wins in a row before falling in 10 innings at New Mexico on Wednesday. Picked to finish fifth in the Big 12, the Red Raiders (30-10, 11-1) can take a big step toward the conference title with series wins the next two weekends against Texas (17-20, 7-5) and at TCU (27-8, 9-3).

All three games of the Texas series are sold out.

It’s not impossible for Texas — which has won three of four Big 12 series — to make a push for the conference title, but it’ll probably require a dreamy scenario similar to Garrido’s in which the Horns win their remaining 12 league games. Or at least a bunch of them.

UT still must play series against Oklahoma State, at West Virginia and against Baylor.

“We know what lies in front of us and what we need to do to be successful and make (the postseason),” Culbreth said.

Tech isn’t going to want to cooperate with that plan. Led by three freshmen weekend starters, the Red Raiders have won 10 straight Big 12 games for the fifth-longest streak in league history. Their most impressive work came last week when they picked up a road sweep at Oklahoma State and outscored the Cowboys 28-8.

Counting neutral site games, Tech has played 19 of its 40 games away from Lubbock, a scheduling tactic aimed at boosting its RPI. Tech currently sits 11th and is the only Big 12 team residing in the top 20. TCU is 25th.

“Guys have rose to the challenge of going on the road and we’re going to need to continue to do so,” Texas Tech coach Tim Tadlock said.

Tadlock said he doesn’t worry about how his young pitchers will perform now that the stakes are getting higher. However, it seems like a worthy discussion. In game one, Tech will throw rookie Davis Martin (5-0, 1.67) followed by another newcomer in left-hander Steven Gingery (3-1, 2.87) in game two. Tech has not announced a Sunday starter, and it remains to be seen if Tadlock will go to freshman lefty Erikson Lanning, who started and threw five innings in Tuesday’s win over New Mexico.

“From the time we got this freshman group on paper, we felt they were guys who could step in and pitch right away,” Tadlock said. “It doesn’t always work out that way. … This group has gone out and done what you think they’re gonna do which is fun to watch.”

Offensively, Tech is second in the conference with a .316 batting average, and its 36 home runs are six more than anyone else has hit. Its a diverse attack with Tanner Gardner leading the league in hits (55), Eric Gutierrez leading in runs scored (39), Michael Davis leading in doubles (16) and Stephen Smith and Tyler Neslony sharing the lead with OSU’s Dustin Williams for home most runs (eight).

Tanner Garnder is second with a .390 average at the plate.