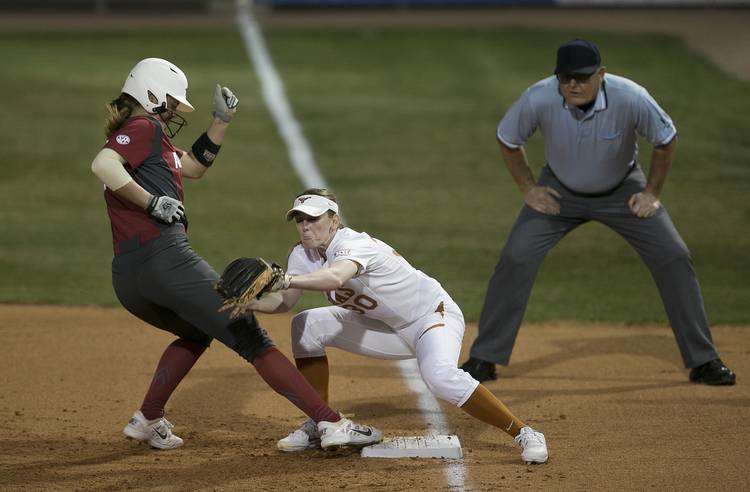 Texas's Kelli Hanzel reaches out for a catch as Arkansas's Nicole Schroeder makes it back to first base on Thursday, February 11, 2016. Texas beat Arkansas 4-1. DEBORAH CANNON / AMERICAN-STATESMAN

Last week’s three-game series sweep to ninth-ranked Oklahoma ended Texas’ chances at a Big 12 championship, so the Longhorns have refocused their goals.

With a dozen games left to play, beginning with Friday’s opener of a three-game home series with Oklahoma State, Texas wants to build momentum for the NCAA postseason by improving its RPI.

“Losing the way we did to Oklahoma was painful because we were in every game and they all came down to the end,” Texas coach Connie Clark said. “We’ve talked about RPIs and the opportunities that lie ahead, and that’s what we are focused on.”

Texas’ final three conference series (Oklahoma State, Iowa State and Kansas) are against teams that were ranked below the Longhorns in the Big 12 preseason poll, so it’s imperative that Texas has success down the stretch.

“Oklahoma State has a different coaching staff this season and I compare them a little to Texas Tech,” Clark said. “They want to play fast and aggressive and try to force you to make mistakes. We need to control that and stay on our game and own the moment.”

The Longhorns will have to find a way to fill the hole left by the injury to leftfielder Stephanie Wong, who hurt her shoulder trying to make a diving catch against Texas Tech two weeks ago. Wong did not play against Oklahoma and has not been cleared to hit or play in the field.

“Whether it’s injuries or making sure you’re hitting your standards, we have to control the controllables,” Clark said. “That’s what being a part of the team is about. We’ve utilized our roster well this year through all 19 players and will continue to lean on that depth.”

Despite the three losses in Oklahoma, the Longhorns were bolstered by the performance of first baseman Kelli Hanzel, who made several sterling plays in the field and has come alive with the bat. She went 3-for-3 with three runs scored in the opening game of the series and produced Texas’ only runs in the three-run seventh-inning in the third game.

Clark lauded Hanzel for her intelligence and approach to the game and the junior’s acceptance of a leadership role on the team.

“Kelli is a great student and a tremendous athlete and works so hard,” Clark said. “She just finds a way to get things done, and I’m being totally respectful when I say that. We’ve asked her to be more vocal because we need to hear her voice more and to lead more and she has.”