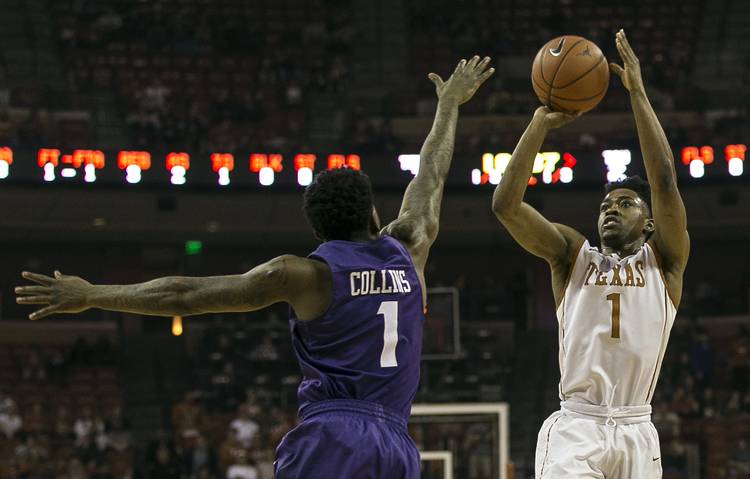 In high school, he wanted to stick it to recruiting services that didn’t even consider him among the top 300 players in the country.

Midway through his junior season at Texas, he wanted to silence all the naysayers who thought he could never become a pro prospect.

“I believe I’m a good player,” Taylor said after a clutch performance at Kansas State in February. “I believe I’ve let other people know that, too.”

Now, Taylor is betting on himself yet again. After two weeks of gathering information, the 6-foot-3 guard announced Thursday he will hire an agent and go headlong into the NBA draft.

According to Shot Analytics.com, an astounding 75.2 percent of Taylor’s shots last season were 15-foot elbow jumpers, dunks or layups. He took only four 3-point shots all season from the corners. A majority of his 3-point attempts came from the top of the key.

“I’ve been chasing my dream to play in the NBA my entire life. In order to fully pursue this dream, I have made the decision now to hire an agent and turn professional,” Taylor said in a statement released by UT.

Taylor could not be reached by the American-Statesman. He was headed to Houston to continue draft preparations. A UT spokesman said Taylor may meet with reporters next week.

“While I’m sad to be leaving my teammates and family behind at Texas, I am ready to start this next chapter of my career,” Taylor’s statement continued. “Thank you to all the fans that have supported me these past three years. You have made me feel at home.

“Coach (Shaka) Smart, I learned so much from you in a short period of time and you will continue to be a role model for me. Love you, Coach.

“These next two months are going to be intense, but I’m ready for it,” Taylor added. “Follow along with my journey as I prepare for this next step in my career. Thanks again to all the fans here in Austin. Hook ‘em Horns!”

In a statement, Smart said, “We are extremely grateful for the impact Isaiah has made during his time at Texas. I truly enjoyed coaching him this past season and will support him wholeheartedly as he moves into this next stage of his career.”

ESPN analyst Fran Fraschilla said Taylor likely projects as a second-round pick or as someone who lands in the NBA’s Developmental League. “And the D-League is not a curse,” he said.

“Attitude and character are in (Taylor’s) favor,” Fraschilla said. “The improvement he made over three years is something teams will like. And you’re getting a kid who is one of the fastest players in college basketball.”

From the UT coaching staff’s perspective, Taylor’s announcement was somewhat expected. Smart and his assistants knew they’d be losing five scholarship seniors and possibly a sixth, if Taylor left.

In some respect, Smart can now turn the reigns completely over to returning young guards Eric Davis and Kerwin Roach while adding freshman Andrew Jones, who averaged 30 points and 10 rebounds last season at Irving MacArthur.

“While there’s no question Isaiah would have been arguably the best player on the team next year, this allows him to pursue his dream of playing in the NBA and it allows Shaka to move forward with the continued retooling of Texas basketball,” Fraschilla said.

A Big 12 title’s off the table, but plenty for Texas softball to play for