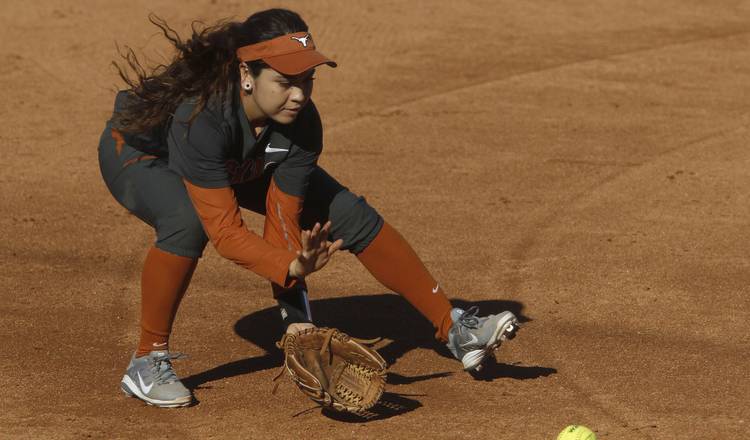 Paige von Sprecken shut off her brain when she stepped in the batter’s box in the bottom of the fifth inning Saturday afternoon at McCombs Field.

The Texas Longhorns had one out and two runners in scoring position, and they were facing a three-run deficit.

“Don’t think, Paige,” von Sprecken told herself. “Just go up there and have a quality at bat.”

It’s difficult to keep thoughts from flooding your mind when you know that a hit can get your team back in the game. But von Sprecken simplified her situation.

“If I have a quality at-bat and I get the runners in, then that’s just icing on the cake,” von Sprecken said.

Her plan worked, and her at-bat ignited Texas’ 5-3 comeback win over Oklahoma State. Von Sprecken smacked a liner to right-center field that brought home Lindsey Stephens and Celina Felix to slice the Cowgirls’ lead to 3-2. Von Sprecken advanced to second on the throw home, and Tiarra Davis, pinch hitting for Erin Shireman, lined a single to right field that brought in von Sprecken and knotted the score at 3-3.

Von Sprecken was Texas’ starting pitcher, and she and the Horns fell behind early.

In the top of the second, Randee O’Donnell chopped an infield single. Maddie Holcomb then bunted her way on to put two runners on with two outs. Leadoff hitter Vanessa Shippy smacked the first pitch from von Sprecken to the gap in right field, and O’Donnell and Holcomb scored to give Oklahoma State (22-21, 4-8) the lead.

But she focused on throwing strikes and trusting her defense, and things got better. The Cowgirls got an unearned run in the fifth, but that was all.

The Horns (29-13 overall, 4-6 in the Big 12) managed just one hit and no runs in the first four innings but cranked out five hits and five runs in the fifth and sixth.

“We just kept it simple,” Felix said, “and it was like: See the ball; hit the ball. And after that, it was contagious for all of us.”

Second baseman Stephanie Ceo singled to lead off the sixth inning and was bunted into scoring position. After Stephens walked, Felix singled in Ceo with what proved to be the winning run. Rachel Scott brought in Stephens on a fielder’s choice to put Texas up 5-3.

Texas, which beat Oklahoma State 4-2 Friday night, hopes to wrap up a sweep Sunday afternoon and boost its RPI for postseason consideration.

“Right now it comes down to, OK, it’s about RPI, so you know what, you cannot be satisfied with two wins,” coach Connie Clark said. “We got to come out and really take care of business tomorrow as well.”