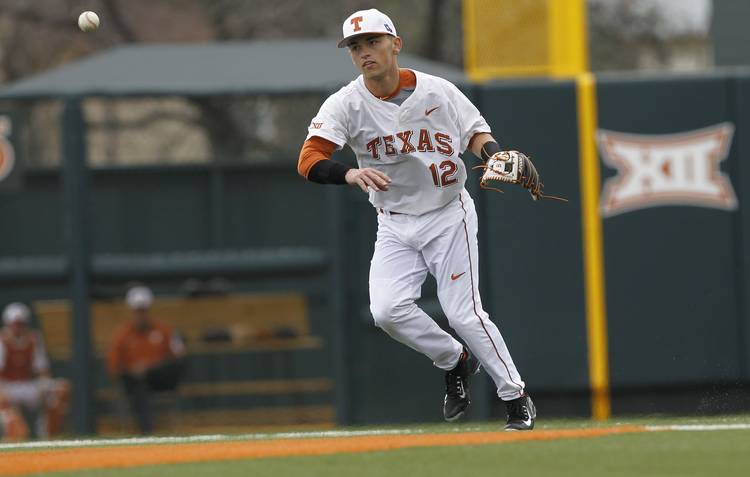 Texas' Joe Baker makes a toss to second for the double play against California during a NCAA college baseball game at Disch-Falk Field on March 6, 2015. Baker went 4 for 4 on Sunday in Texas' 17-1 win over No. 10 Texas Tech. (Stephen Spillman / for American-Statesman)

LUBBOCK — This was an affirmation game.

For the last couple of weeks, the Texas baseball team has insisted they’ve turned a corner and had distanced themselves from their early woes.

There wasn’t enough evidence to completely back that claim — but now there appears to be.

Needing an uplifting weekend to remain a contender in the Big 12, the Longhorns smoked Texas Tech, 17-1 Sunday to secure the series from the nation’s 10th-ranked team. The margin of victory was the largest for either team in the 156 meetings between them.

Tyler Rand and Joe Baker — two players who were injured for large stretches of the early season — each hit his first home run of the season, and the Horns put up consecutive five-run innings in the third and fourth. All but one batter collected a hit, and four of them came through with multi-hit efforts.

This shellacking, which was mercifully called off after seven innings, positions Texas (19-21, 9-6) in third place in the conference standings with Oklahoma State. Those teams will square off this weekend in Austin, while another key matchup between league-leader Texas Tech (31-12, 12-3) and TCU (28-10, 10-5) goes down in Fort Worth.

So Texas, which has won four of its five Big 12 series, is squarely in this thing.

“It’s our time to click,” Baker said. “We have our guys healthy, we’ve got everyone on the field we want on the field. We’re playing with a lot of confidence.”

Baker stepped to the plate with bases loaded in the third and fourth innings and on both trips ripped a two-run double. He added a two-run home run in the seventh, and finished the day a cool 4for4 with six RBIs. Those numbers might’ve been even better had Baker not been intentionally walked to load the bases in the fifth.

Rand had three RBIs, the result of his first collegiate home run on a three-run blast to left field in the second inning. Zane Gurwitz (2-3, HR) and Patrick Mathis (1-3) also drove in three runs. The only player to not collect a hit was Kacy Clemens, who was productive nonetheless with two walks and two runs scored.

“Everybody was hitting 1 through 9, all day,” Rand said.

It was a nightmarish first start for Texas Tech left-hander Hayden Howard, who was pulled from the game with no outs in the third inning after consecutive four-pitch walks to Tres Barrera and Clemens. Howard, who entered the day with a 6-1 record and a 1.91 ERA, absorbed seven earned runs, walked three, and allowed three extra base hits. Maybe his only good moment was when he fielded a bunt and flipped home to beat Baker on a suicide squeeze in the second.

Ryan Shetter, who was initially pegged to start, replaced Howard and lasted 1 1/3 innings and gave up five earned runs.

“I mean we obviously would have loved to win the series, loved to beat Texas,” Tech coach Tim Tadlock said. … “When you give a team confidence, the way we did yesterday, sometimes it carries over the next day. Especially, when you don’t pitch well. The old saying about starting pitching is it can kind of take of momentum. That definitely held true today.”

With Friday’s 13-6 win, Texas Tech ran its Big 12 win streak to 11 and and its home streak to 13. So the importance of Texas taking two to win the series can’t be overstated and will command attention both from its own worn down fanbase and national observers.

For Texas, Kyle Johnston didn’t have much command (five walks) but didn’t need to be anything special given his run support. Johnston (3-1) went six innings and didn’t allow a hit until Cory Raley’s one-out single in the fourth.

For the series, Mathis had nine RBI, and Barrera doubled in all three games.

“I think the key now is to recognize not to play up and down based on who the opponent is,” UT coach Augie Garrido said.

Every Texas hitter has his sweet spot; the goal is to not miss the pitch