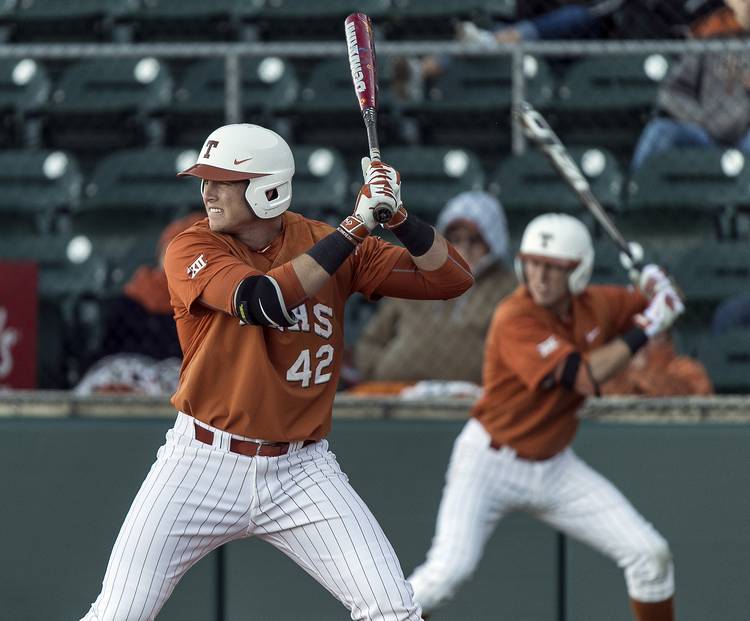 Every hitter has one.

It’s the area of the strike zone that’s hotter than an August day in Austin. It doesn’t matter if they are playing little league at the Y or at Disch-Falk Field.

It’s called the sweet spot, the hot zone, the wheelhouse, and if a pitch is thrown to that specific area of the strike zone, it’s getting whacked. Every one of Texas’ hitters has his own sweet spot, and those hot zones could serve as the pendulum that determines the direction of the rest of the Longhorns’ season.

In baseball, the strike zone starts at a batter’s armpit and stretches down to his knee and across the width of the plate. You can fit about 70 baseballs inside that strike zone. But it’s that one specific spot, an area that fills, say, three balls. That’s the sweet spot.

First baseman Kacy Clemens, who’s hitting .295 this season, has a sweet spot that’s middle-away, basically on the outer edge of the strike zone. He likes pitches there because that’s the spot that allows him to get extension when he swings.

“That’s kinda where my approach is — middle away,” Clemens said. “And if somebody throws it there, I can hit it gap to gap pretty easily.”

Tres Barrera’s sweet spot is belly button-high, and a few centimeters away from the middle. Barrera, who plays catcher and is the team’s fourth-leading hitter (.306), doesn’t know why or how that area came to be his wheelhouse. It just is.

“That’s just what I look for,” Barrera said, “and I feel like I put my best swings on pitches that are in the zone.”

Most hitters like it when pitches are middle-in, “because that’s an easy ball for them to drive,” Clemens said. But pitches on the inside part of the plate have to be hit earlier, because if a hitter is early or late, then the pitch will most likely be driven down the side or even foul.

Barrera and Clemens acknowledge that their sweet spots are middle-away because they want to extend their arms, which is imperative for a hitter.

“When you get behind it and extend through it, you’re gonna be able to really have a lot of force behind the ball,” said Texas hitting coach Tommy Nicholson.

When hitters get extended, that’s when the bat speed is at its maximum velocity, and it’s why hitters can apply the most force to the ball. Anatomy often determines the location. It’s why every hitter is different.

“Each person with their physical build, length of arm, the reaction time, muscle quickness, vision — all of those human elements,” Texas coach Augie Garrido said. “Some people are different than others.”

Repetition cements that area as the hot zone.

“You gotta take a lot of swings and find that out,” Nicholson said. “Every hitter’s gotta know who they are and what their strikes are.”

But once hitters determine their sweet spot area, it doesn’t mean they’ll swing freely at every pitch thrown there. Barerra and Clemens may go up to bat with a mindset that they will only hit a fastball that’s thrown in their wheelhouse. So if either of them sees a curveball or a change-up middle away, unless the pitch is hanging like eye-candy, they won’t swing at it. They’ll wait for their pitch.

“When they get that pitch,” Garrido said, “the key is not to miss it.”