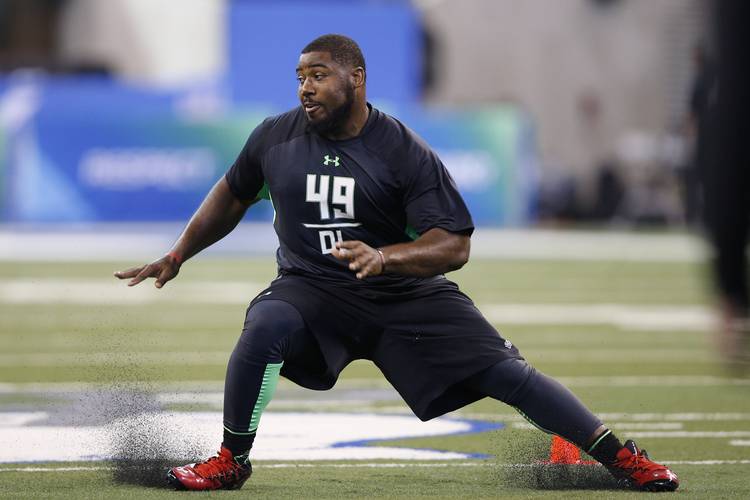 Though he hasn’t worked there for more than two years, Charlie Strong is still padding his recruiting stats at Louisville.

Advancing his reputation as a keen evaluator of talent, the Texas coach on Thursday will in all probability claim a fifth player he signed at Louisville who went on to become a first-round pick in the NFL Draft.

Sheldon Rankins, an overlooked 3-star defensive tackle whom Strong pulled from the Atlanta area, is expected to come off the board during the draft’s opening round, according to most mock drafts. The American-Statesman’s final mock has Rankins going 12th overall to New Orleans — ahead of former 5-star defensive tackles Robert Nkemdiche of Ole Miss (Oakland, 14th) and A’Shawn Robinson of Alabama (Washington, 21st).

Rankins’ rise qualifies as another recruiting coup for Strong, whose longevity at Texas will ultimately swing on whether he can replicate the recruiting successes he enjoyed at Louisville and replenish the Longhorns’ roster with pro-level talent. Counting Rankins, Strong will have had 14 of his Louisville recruits taken in NFL drafts, with a slim chance of adding to that total in this weekend’s later rounds.

Besides quarterback Teddy Bridgewater, who was ranked among the nation’s top 100 recruits in 2011, all of Strong’s first-rounders were 3-star prospects. They include 2015 receiver DeVante Parker (Miami Dolphins), 2014 safety Calvin Pryor (New York Jets) and 2014 linebacker Marcus Smith (Philadelphia). Next to join is Rankins, who was considered the No. 41-rated strong side defensive end and the No. 745 overall recruit in 2012. He considered Wake Forest before choosing Louisville.

“It was a no-brainer for us,” said former Louisville assistant coach Kenny Carter. “We actually thought he was a steal.”

Incidentally, another defensive tackle in this year’s draft, Texas’ Hassan Ridgeway, could be the only player from Strong’s current team that ends up being taken over the seven rounds. Cornerback Duke Thomas and offensive lineman Sedrick Flowers have a shot to join Ridgeway, though they’re far from a sure thing.

This speaks sympathetically of Strong, many of whose supporters are of the opinion that his 11-14 record so far at Texas is a reflection of poor recruiting by his predecessor, Mack Brown. Further credence to that notion might manifest in next year’s draft, which again figures to be thin on draft-worthy Longhorns.

“We had an evaluation process that was very precise, and I’m sure Charlie still uses it at Texas,” Carter said.

Carter, who was Strong’s running backs coach at the time, was Louisville’s pitch man in Rankins’ recruitment. He said the key to the staff identifying underrated prospects was the result of an objective evaluation process that Strong took from his time on Urban Meyer’s staff at Florida. In that system, numeric values are assigned to various skills including physicality, hand movement and ball pursuit. A player’s height and weight is also considered, but not dwelled on.

To that end, Carter believes Rankins would have had bigger offers, but schools were turned off by his relative lack of height. (At the NFL scouting combine, he measured 6 feet, 1 inch.)

To drive consensus, Strong tasks all of his coaches to evaluate each recruit. So Carter, an offensive mind, broke down Rankins’ explosive moments just as linebackers coach Brian Jean-Mary analyzed Parker’s route-running. When the film came on, silence ensued in the room to avoid tainting another’s judgment.

Carter now employs that same method at Delaware State, where he is entering his second season as head coach.

“What it does is prevents human nature from taking over because if you’re recruiting a kid, your heart’s going to get involved if you really like him,” Carter said. “We don’t care how anybody else evaluates them or how many offers they had. It didn’t matter.”

If a recruit reached a certain numerical score, he was offered a scholarship. If he fell short, he was eliminated from the recruiting board.

Come Thursday night, that process will continue to serve Strong.

“All we cared about was our evaluation of the kid,” Carter said. “Charlie was always really, really good about that. We didn’t have to worry about what our recruiting class was going to be ranked at the end of the deal.”