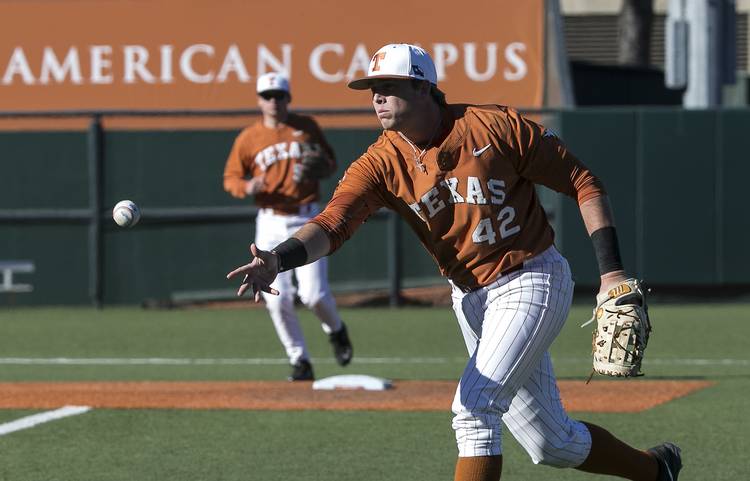 What led to this?

Something has led to the resurrection of this Texas team, a team that seemed dead many times as the winning percentage dropped and excuses and explanations mounted.

It started with a series win over Texas Tech last weekend and continued Tuesday night at UFCU Disch-Falk Field.

Texas wasn’t flat — “The infield (and) outfield was,” Garrido interjects – and really hasn’t been, at least not since the loss to Texas Tech last Friday.

“That’s the 27th inning, at the completion of this game, we’ve played good solid baseball,” Garrido said. “And the unbelievable things that have happened earlier in the year have stopped happening.”

Earlier in the year, Texas had trouble squeezing out hits, getting runners on base and producing runs. But Texas had eight hits against the Bobcats, and 14 base runners.

The Longhorns scored first, in the bottom of the first inning, showing they didn’t exhaust all of their runs after they scored 17 versus Tech on Sunday. With two outs, catcher Tres Barrera walked, and Kacy Clemens smacked a double to the gap. Joe Baker singled and brought home Barrera and Clemens to give Texas a 2-0 lead.

The lead lasted two innings. In the the third, Texas starter Connor Mayes walked Jared Huber and surrendered a single to Jacob Almendarez to kick-off the inning. Both of them scored to tie the game when Ryan Newman singled. Mayes was pulled after the third.

The tie lasted a half-inning. Kacy Clemens connected on a 1-2 pitch with two outs and the wind whipping to left field. The ball arched over the left field wall.

“I knew I hit it well,” Clemens said. “I had barreled it up and the pitch was up so I got it up in the wind.”

The Longhorns scored another run in the third and then a run each in the fifth and sixth innings.

Texas’ first four runs came with two outs. Overall the Horns hit .429 with two outs Tuesday, showing patience and execution at the plate, something the Horns had trouble with earlier in the year.

“I think, overall, we’re getting better pitches to hit,” Clemens said. “And we’re hitting them, rather than fouling them off.”

Now the Longhorns are hitting the ball with power. They’re getting on base and scoring runs.  The giant flat-screen monitor out in right field shows the line-up’s batting average. On the screen, most of Texas’ hitters were above .300, and those who weren’t, were really close. Earlier this season, Texas would hit screaming liner drives that seemed to always find a player on the other team.

“When you only hit three or four balls hard and they get caught (it’s like), ‘Oh we hit balls hard but they got caught,’ ” Clemens said. “But when you hit balls hard all night, and some fall in, then that’s how you win ball games, that’s how we’ve scored runs lately.”

All season, Garrido has said that whether or not the team wins or loses the game, the squad is trying to get better. They’ve educated themselves well, and it’s what’s led to this.

Every Texas hitter has his sweet spot; the goal is to not miss the pitch

With Rankins, Charlie Strong should have another strong draft with former recruits