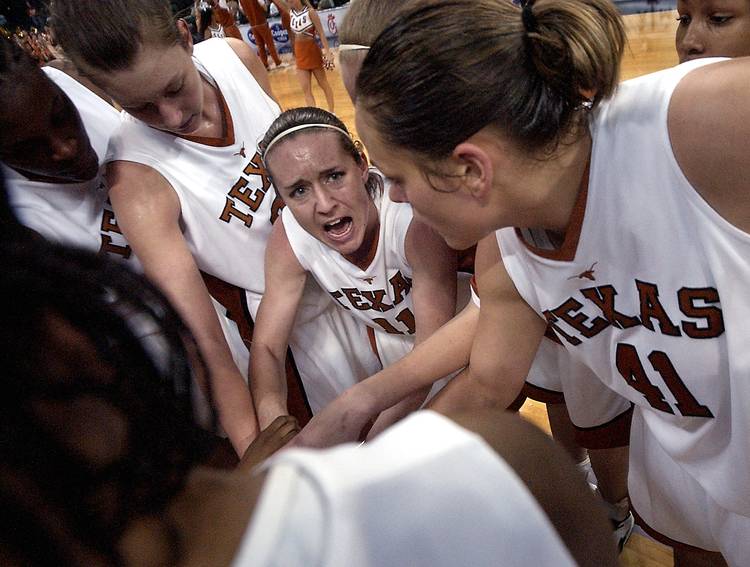 Deborah Cannon/American-Statesman Texas's Jamie Carey, center, talks with her team as they huddle together after beating Iowa State 64-54 during the second round of the Big 12 Championships on March 10, 2004.

During Jamie Carey’s first practice at Texas in 2002, the point guard became agitated when a teammate couldn’t handle her firm pass and the ball skipped out of bounds.

“It was Stacy Stephens, and she didn’t drop too many of them,” recalled Texas head coach Karen Aston, who was Jody Conradt’s assistant back then. “I won’t say exactly what Jamie said, but it was something like ‘Don’t drop the ball again.'”

Carey, who was introduced as UT’s newest assistant basketball coach at Cooley Pavilion on Thursday, smiled as Aston told the story.

Aston said that story indicated “how much passion” Carey has for basketball, and that it stamped her as a team leader. It was that kind of on-the-court direction that makes the former Longhorn such a good fit at Texas.

Carey is remembered as a hard-nosed player who earned Pac-10 freshman of the year honors at Stanford before leaving the game to deal with concussion issues. After skipping two seasons, the 5-foot-6 native of Hutchinson, Kan., transferred to Texas and played a key role in UT’s drive to the 2003 Final Four.

Carey, who played four seasons in the WNBA, was assistant women’s national team director for four years at USA Basketball, coached high school basketball in Colorado for five years, and spent the past two seasons as an assistant with the University of Colorado.

“I considered myself a coach the whole time,” Carey said. “I took that role as a player when I was little, and probably in moments I shouldn’t have when I was young. I’ve always been a student of the game my whole life. From a point guard standpoint and the way I was always taught to play, you play a coach’s role as a point guard.”

Texas went 31-5 this past season, including a trip to the Elite Eight. Carey said Texas “has the pieces” to make a Final Four run quickly.

Carey said she will fit in well at Texas, adding, “(Aston) works harder than anyone in the business. I think I align in that way with Karen. That’s something I really appreciate. I’ve known her for a really long time and I trust what she brings to the table.”

Carey was the 2004 recipient of the Jim Valvano Comeback Player of the Year Award, and as a senior in 2005 was named the NCAA Woman of the Year. She was the 31st pick in the 2005 WNBA draft by the Phoenix Mercury and later signed with the Connecticut Sun. She played four years for the Sun, which advanced to the postseason each of those years, including an appearance in the 2005 WNBA Finals.

Carey holds a bachelor of arts degree in sociology from Texas in 2004 and completed her master’s of education in sport management there in 2006. She was a two-time third-team CoSIDA Academic All-America selection and a two-time first-team All-District selection.

The starting five that led the Longhorns to the NCAA women’s Final Four in 2003 now sit on the bench, where all five help guide college or high school teams. The coaching roster rundown:

Then: A versatile 6-foot-2-inch guard, Bowers started as a sophomore during the Final Four season. She grabbed seven rebounds as Texas lost to Connecticut 71-69 in the national semifinals.

Then: A hard-charging senior point guard who was sidelined for two seasons because of concussion-related health concerns, Carey captained the Final Four squad.

Now: On Thursday, Carey was introduced as a new assistant on Karen Aston’s coaching staff at UT.

Then: A 5-9 senior guard from San Antonio, Dillard averaged 7.6 points and 4.7 rebounds during the Final Four season.

Now: In May of 2014, Dillard was hired as an assistant coach at the University of Houston.

Then: Like Bowers, Schreiber, a 6-2 forward, was a sophomore during the 2002-03 season. She scored 13 points in the Final Four matchup against UConn.

Then: A 6-4 center, Stephens scored a team-high 16 points in the loss to UConn.

With Clark’s 800th win behind them, Texas softball focuses on Big 12 stretch run