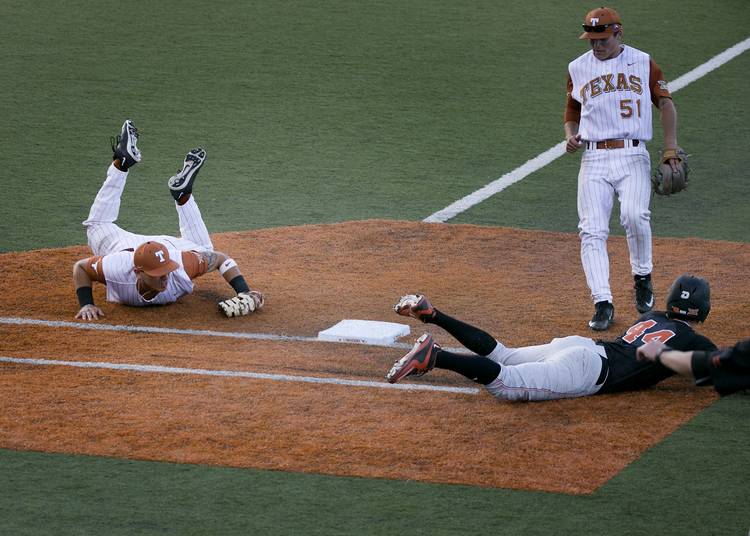 The University of Texas played a doubleheader Saturday, April 30 2016 against Oklahoma State. In the second game, OSU's Andrew Rosa is safe at first as UT's Tres Barrera , left, does not get back to the base fast enough. LAURA SKELDING / AMERICAN-STATESMAN

Believed to have been corrected, a rash of fielding miscues resurfaced for Texas in its biggest series of the season.

Hosting a doubleheader against No. 25 Oklahoma State on Saturday, the Longhorns committed five errors — two in a 3-0 loss in game one, and three more in a 6-3 evening setback.

Conversely, OSU was squeaky clean with no errors.

The twin losses likely wrecked whatever hopes Texas (20-23, 9-8) had of salvaging its season with a Big 12 regular season title. Regardless of the outcome of Sunday’s game three, the Horns will close the weekend in fourth place and trailing leader Texas Tech by as many as five games.

There are only two series to go after this one.

On the day, Texas pitchers allowed nine runs but just three of them were earned. However, it should be noted both starters — Morgan Cooper and Culbreth — had errors themselves that led to runs.

This sort of stuff appeared to be out of UT’s system after it had won six of seven games coming into the series.

“A lot of the same kind of things happened,” UT coach Augie Garrido said. “The game is about imperfections. They were imperfect. We were more imperfect.”

The Big 12‘s wins leader, Culbreth (8-3) went 5 2/3 innings and snapped his streak of nine straight games of at least six innings. The only other start in which he didn’t get to six came in the opening weekend against UNLV.

Trouble struck early for Culbreth, who gave up a double to J.R. Davis to start the game. The next batter, Corey Hassel, put down a bunt, and when Culbreth tried to throw him out the ball slipped from his hand and landed near the home dugout. Davis scored on the play for the first of two OSU runs in the inning.

In the fifth, OSU scored three runs on Donnie Walton’s RBI single, Ryan Sluder’s sacrifice fly, and an RBI infield single by Andrew Rosa that ricocheted off Culbreth’s leg. Also in that spurt, Mathis dropped a ball on the run.

Culbreth was visibly in pain, but Garrido thinks his best pitcher will be OK.

“At least we think so,” Garrido said. “Sometimes over night they’ll tell you something different in the morning.”

Texas had 12 hits on the day, including seven in game two. Barrera doubled twice in the nightcap, bringing his season total to 16. Travis Jones had three hits in game one, and added a RBI infield single in the seventh inning of game two.

UT had its chances. In the seventh, Kacy Clemens pinched hit and walked to load the bases. Garrido then sent Bret Boswell to the plate and for the second time on the day he struck out in a late-game situation with runners on base.

Boswell remained in the game and struck out again in the ninth, dropping his season average to .200.

“He’s striking out a lot,” Garrido said. “That’s the obvious result. Why? We don’t know. To me, it appears he may have lost some of his confidence.”

On the day, Texas struck out 17 times.

Horns continue to struggle in openers, get shut out by Oklahoma State