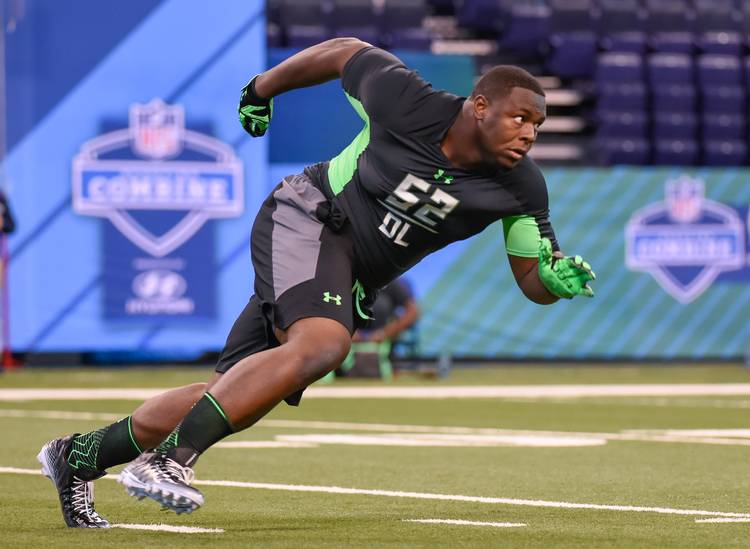 Hassan Ridgeway’s ear-to-ear smile said it all Saturday afternoon. The fact that he was the only Longhorn smiling spoke volumes, too.

The Indianapolis Colts grabbed the Texas defensive tackle in the fourth round of the NFL draft. Granted, it was later than many projected. ESPN draft analyst Todd McShay said Ridgeway was “big, thick, country strong” and added that the Cots were getting second-round talent.

Based on the NFL’s slotted rookie pay scale, Ridgeway could receive a contract worth approximately $2.85 million with a $560,000 guaranteed signing bonus, according to Sportrac.com.

“Words can’t express how I was feeling when I got the call,” said Ridgeway, the only UT player selected this year. “It was amazing. It really was.”

The 2016 draft only solidified what should now be considered two unassailable facts.

Charlie Strong can evaluate talented players, elevate their play and help three-star recruits become legitimate professional athletes. And the talent he inherited at Texas was woefully thin, based on the program’s historical standards.

A school-record 10 Louisville players were drafted last year, and almost all were signed by Strong during his time with the Cardinals. Sheldon Rankins was taken 12th overall this year, becoming the fifth first-rounder from Louisville with Strong ties.

Compare that with the Longhorns. Not a single player heard his named called in 2014, thus ending an incredible 76-year streak of UT players getting drafted. Five players were taken last season, including first-rounder Malcom Brown.

With Ridgeway getting the call, Texas has produced six draft picks the past three years — one of the lowest post-coaching change totals in the modern era.

Darrell Royal, Fred Akers and David McWilliams all left behind NFL-caliber players, if the draft is any indication. The Horns had double-digit draftees in the three years after their departures.

Only five players were drafted in the three years after John Mackovic departed, but he also left Mack Brown a future Heisman Trophy winner in Ricky Williams, not to mention two future first-round picks in Leonard Davis and Casey Hampton.

Brown was a recruiter nonpareil, and there’s no question Texas enjoyed its share of draft day hoopla on his watch. The Longhorns had an average of five players drafted annually from 2006 to 2010.

Brown’s recruiting classes in 2010, 2011 and 2012 all ranked among the top four nationally. Looking back now, it’s clear NFL scouts believed all that talent was  mislabeled, squandered or underdeveloped.

To NFL scouts, a team’s win-loss record isn’t that important. Scouts are looking at college players strictly as individuals. Can Player X fill our needs or not? What happens around that player or how games unfold is largely immaterial.

It should be noted that scouts get it wrong, too. Every NFL team passed on Texas defensive end Jackson Jeffcoat during the 2014 draft. Jeffcoat played two seasons with the Washington Redskins and just got picked up off waivers by the Cleveland Browns.

Ridgeway said team officials spoke glowingly of the job Strong has done with the Longhorns.

“They have the utmost respect for it,” Ridgeway said. “I got that impression right off the bat in how they talk about the program and what he’s doing here. They have a lot” of respect.

Strong has signed multiple players who project as pro prospects. Running backs D’Onta Foreman and Chris Warren III and linebacker Malik Jefferson spring to mind, as do others.

But that’s what recruiting analysts and reporters thought about the players Brown signed earlier this decade, too.

As it stands now, Texas’ projected draft class of 2017 isn’t that strong, either. Offensive lineman Kent Perkins (6 feet 5, 320 pounds) should get a long look just on size alone. Caleb Bluiett (6-3, 266) has versatility.

The real question is whether the Longhorns can have the same type of draft success in future years as the Cardinals have. If Texas can win some games with those future draftees, that’d be a bonus.

Horns continue to struggle in openers, get shut out by Oklahoma State