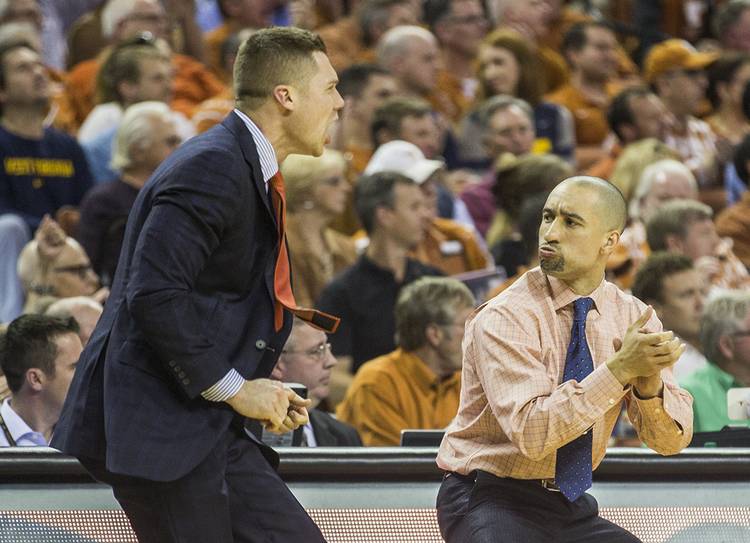 Rick Barnes was so loyal to his assistants, he chose to get fired himself rather than fire one of them. Even after one season, Shaka Smart appears unafraid to make changes.

In news that is both stunning and confusing, Smart will demote assistant coach Mike Morrell, someone he’s known almost a decade, in order to promote director of operations Jai Lucas to full-time assistant coaching status.

Morrell will remain with the Longhorns, although in some as-yet-undetermined title, according to a source close to the program. According to NCAA rules, only four coaches can recruit off campus. With this move, Lucas becomes a full-time recruiter while Morrell pitches in once recruits arrive on campus.

“We are reorganizing our staff to help continue moving the program forward,” a source close to the program said. “We will always continue to assess on a year-to-year basis what is best for our program. We will evaluate what we are doing as it relates to our staff and do what is right for that current season.”

Smart was not available for comment, and Morrell could not be reached by the American-Statesman. Smart, football coach Charlie Strong and athletic director Mike Perrin are headed to Phoenix this week for Big 12 meetings.

The driving force behind Smart’s decision is a desire to keep Lucas from jumping ship and taking an offer to join the TCU coaching staff. Lucas, who played two seasons at UT under Barnes became a special assistant in 2013. Smart retained Lucas and named him director of basketball operations.

Lucas, 27, is ready to advance within his chosen profession. As operations director, Lucas was unable to do any on-court coaching, per NCAA rules. Now, he’ll be on the court and on the road recruiting for the Horns.

Still, this creates some awkward questions for Smart about his relationship with Morrell. The two worked together on the Clemson staff during the 2007-08 season. Then, Smart hired Morrell at Virginia Commonwealth, and the pair spent four seasons together in Richmond before coming to Austin.

“Mike Morrell has been and continues to be someone who Shaka trusts as much as anyone,” the source said. “He will continue to be heavily involved in recruiting, mentoring our current student athletes and working closely with coach Smart.”

Morrell will be able to get back on the road this summer when Smart takes a temporary leave to coach the USA Basketball Under-18 team. NCAA rules allow for someone to step in and replace Smart on the recruiting trail under those circumstances.

This move may not affect Jarrett Allen’s recruitment at all. Assistant coach Darren Horn has been Allen’s lead recruiter. Allen, the five-star big man from St. Stephens, has yet to announce where he’ll play this season. He’s believed to be considering Texas, Kansas and Houston.

With Clark’s 800th win behind them, Texas softball focuses on Big 12 stretch run