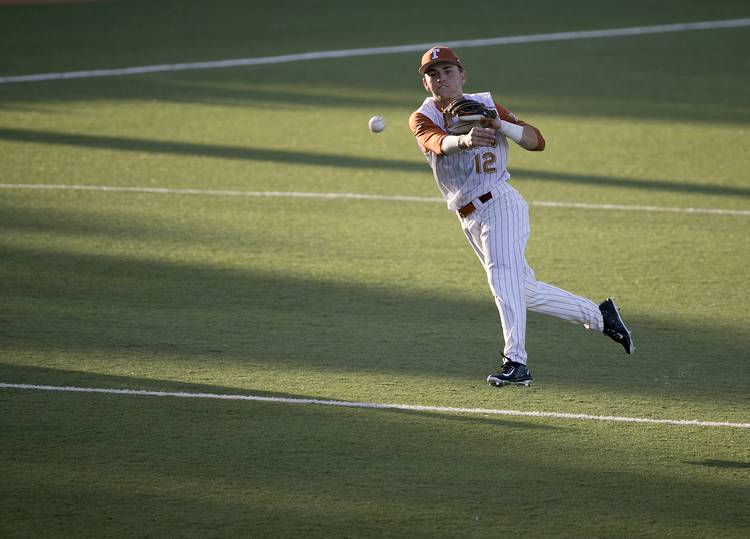 The University of Texas played a doubleheader Saturday, April 30 2016 against Oklahoma State. In the second game, UT's Joe Baker throws a hit to first base for an out. LAURA SKELDING / AMERICAN-STATESMAN

After turning a corner in recent weeks, the Texas baseball team (20-24, 9-9) continued in a circular motion and is back to where its nightmarish season began.

Like a boomerang sweeping back, all of the progress thought to be built heading into a huge conference series unraveled in a sweep by Oklahoma State.

In Sunday’s 8-4 loss, Texas batters struck out 11 times, just as they did in Saturday’s game two. The bullpen was horrendous, loading the bases in the eighth inning and giving up runs on a walk (Chase Shugart) and a hit batter (Eric Dunbar).

It was a painful reminder of how bad things can look only one week after a series win at Big 12-leader Texas Tech.

Afterward, Longhorns coach Augie Garrido submitted to the reality that in order for his club to make the NCAA postseason it must win the conference tournament, May 25-29 in Oklahoma City. Earning an at-large bid to the 64-team NCAA field is unrealistic.

“I think it is now,” Garrido said. “I think we had to win this series. If we would have lost one game and won the other two we would have had some sort of chance, but not anymore.”

Texas’ RPI of 101 entering the weekend will likely drop.

“Coming in, with both teams 9-6 (in the Big 12), either team sweeping or getting swept is a big ground gain in a top three spot,” UT starter Kyle Johnston said. “But we’re not gonna quit.”

In reality, these next eight games are irrelevant beyond the need to refine some deficiencies and maybe jockeying for a seed in the conference tournament. A trip to West Virginia awaits Texas next weekend following a mid-week meeting with Prairie View A&M on Tuesday.

Sunday was a game of back and forths.

OSU (28-15, 12-6) went up 4-0 with a three-run sixth inning that chased Johnston from the mound. Garrett Benge and Colin Simpson had consecutive doubles, and Simpson’s knock, which slid past third base, plated two runs. For the final run, OSU’s Dustin Williams lunged at an offering from UT reliever Travis Duke for an opposite field single.

Johnston, who started off strong but struggled the third time through the order, finished with a final stat line of six hits and four runs in 5 1/3 innings. He struck out five and walked one.

“A couple hits here and there and leaving a pitch over the plate,” Johnston said. “They’re going to capitalize on that. It’s Oklahoma State. They’re a good lineup.”

Texas tied the game with three runs in the bottom of the inning, followed by another in the seventh.

In the sixth, Kody and Kacy Clemens drew walks before Joe Baker was hit to load the bases. Overall, there were seven hit batters with four of them being Longhorns.

Then, Blake Battenfield, the second of three relievers OSU used in the inning, walked Patrick Mathis for UT’s first run of the game. Two more runs came around on Zane Gurwitz’s RBI groundout and a single by Tyler Rand.

In the seventh, Baker laced a shot over the glove of second baseman J.R. Davis to tie the game.

Then, for the second time, OSU took control with four unanswered runs. They all came in a disastrous eighth inning for Texas. Shugart started the inning, and, following a single, a walk, and an out, he threw a wild pitch and hit a batter to loaded the bases. He then walked Jon Littell to plate a run and was replaced by Dunbar, who hit a batter for another run.

Garrido was asked about his frustration in the enigmatic Shugart, who has been both dominant and erratic. His answer spoke to the overall state of his team.

“The whole thing is a gigantic 10,000-pound frustrated gorilla sitting on top of us,” Garrido said. “There’s not a monkey on our back. There’s a gorilla on our back.”