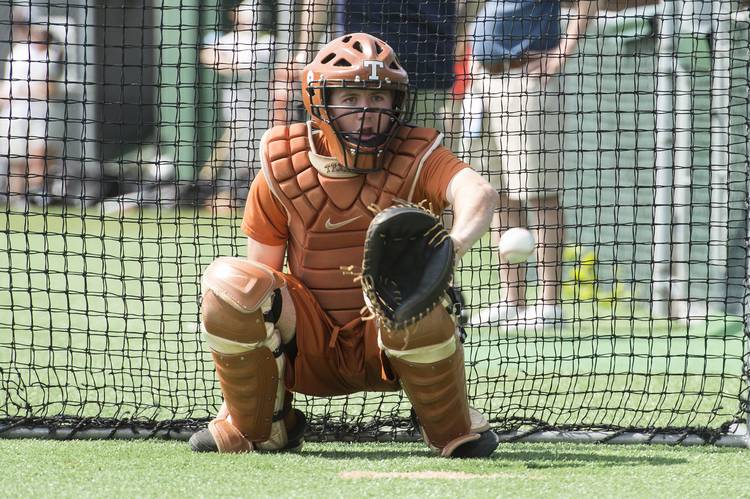 The man they call Butters stepped up to the plate in the bottom of the eighth inning.

He wasn’t nervous, even though it was his first collegiate at-bat.

“I wasn’t really nervous as much as I was excited,” said James Barton, the man behind the nickname. “I used to hit a lot, back in high school and earlier in college.”

Barton, oops, Butters is from Austin. He’s the Longhorns’ bullpen catcher. He’s a senior walk-on. And his family members were at UFCU Disch-Falk Field in Tuesday night’s 7-0 win over Prairie View A&M.

Former Texas catcher Jacob Felts gave Barton the nickname Butters because, without his hat, and with all the questions he asks, Barton resembles Butters from the television show “South Park.”

Tuesday night, while Butters was at the plate, the rest of his teammates were curled on the dugout rail, anxiously awaiting a hit. That didn’t happen. Butters grounded out to shortstop. Still, he got his at-bat. Former bullpen catcher Grant Martin got his chance last year, and before that, it was Patrick Marsh. Butters’ at-bat was a happy moment in an ugly game.

“It couldn’t have been more fun,” he said. “I come from a long line of good bullpen catchers, and we’ve all got at-bats now.”

Texas improved to 21-24. Prairie View A&M dropped to 10-29. There were as many errors as there were runs, six of them committed by the Panthers.

The game was scoreless through the first five innings, with the Horns and the Panthers stuck in an unexpected pitching duel. Texas starter Connor Mayes pitched his four innings with masterful precision. He allowed one hit and one walk, struck out five, and 34 of his 48 pitches were strikes.

Prairie View’s Edgar Sanchez, meanwhile, flummoxed Texas’ lineup. Not because he has an arsenal of pitches, but rather because of his velocity — the low 80s. Texas coach Augie Garrido said the Longhorns have grown accustomed to pitches in the high 80s and low 90s against Big 12 pitchers, as well as in practice.

“There’s a timing issue there, and it’s real,” Garrido said. “You start facing guys 88 to 95 every weekend, it kind of gets built in, you kinda have that rhythm.”

Texas found its rhythm in the sixth. Michael Cantu singled to lead off and moved to second on Kacy Clemens’ sacrifice bunt. Travis Jones then walked, and Cantu scored when Kody Clemens’ chopper to first snaked past first baseman Angel Avalos. And the Longhorns went up 2-0 when a Josh Jefferson throwing error allowed Jones to score.

The Longhorns added five more runs in the bottom of the eighth, an inning that included four more Panthers errors.

Garrido said he met with leaders of the team after last weekend’s sweep to Oklahoma State.

“What do you think?” Garrido asked them.

“We just gotta have fun,” they replied.

The Longhorns had fun Tuesday night, and not just because they shut out the Panthers. But because they to to watch Butters finally get his at-bat.

Back to square one for Texas following sweep to Oklahoma State

Augie Garrido: “No choice” but to miss Saturday’s game for immigrant award