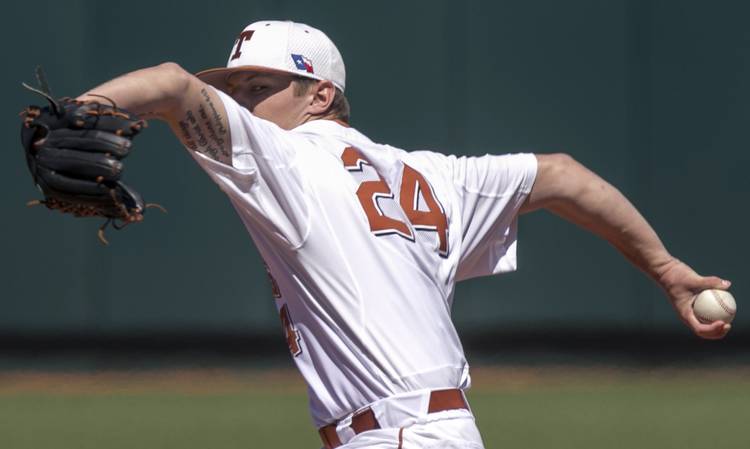 Maybe the best way to describe Texas’ pitching through 45 games is to say it’s been off and on.

“He’s come out, pitched some pretty good games, been off and on with command,” pitching coach Skip Johnson said.

“We’re over the hump, and then we go back,” Johnson said.

So inconsistent, so frustrating. And yet last year’s improbable Big 12 tournament title suggests it’s too soon to abandon this team, at least fully. Continuing this weekend at West Virginia, Johnson will try to unlock the same pitching formula that led to starters going the distance in the first three games of that memorable four-game Big 12 tournament run in Tulsa. Three members of this year’s rotation, Ty Culbreth, Connor Mayes and Kyle Johnston, started in wins that week.

Though it’s too soon to say for sure, steps have possibly been made in recent days. Amid the rubble of the backbreaking sweep to Oklahoma State were starts by Cooper and Johnston that go down as some of their best. Cooper did not give up an earned run in six innings, and Johnston, who normally has dicey command, walked just one batter in 5 1/3 innings. He also hit a batter, and though he got into trouble in his third time through the order, it was Johnston’s “best (start) of the season,” Johnson said.

With only seven regular season games left to improve on a ghastly RPI of 126, everyone acknowledges Texas‘ only available path to the NCAA postseason is through Oklahoma City, May 25-29.

If clicking at the same time, Cooper (2-3, 4.22 ERA) and Johnston (3-1, 2.95) are reliable arms on either side of Saturday starter Culbreth (8-2, 2.99). Though Culbreth has been the most consistent of the three, Johnson said he won’t risk disrupting the comfort the lefty has shown by moving him to the Friday slot.

“I learned from (UT coach Augie Garrido) whenever you have a guy who’s in a stable position, you never want to take him off of that stable position, especially when he’s your most experienced guy,” Johnson said.

Johnson, who holds the title of associate head coach, will fill in for Garrido on Saturday when Garrido is in New York to receive an Ellis Island Medal of Honor.

With the offense and fielding also displaying inconsistencies, it’s hard to envision a scenario where Texas (21-24, 9-9) gets hot in late May without major contributions from the pitching staff, which, despite the inconsistencies, carries a respectable 3.69 ERA that trails only Oklahoma State (3.08) and TCU (3.26) in the Big 12.

It’s worth reminding that Culbreth tossed a complete game in last year’s conference tournament, as did Mayes, whose ability to climb out of the slump he finds himself in may be the biggest factor in whether Texas can repeat as champions. It’s been a difficult sophomore season for Mayes, who began the year as a weekend starter before moving to the closer’s role in late March to make room for Cooper. Struggling in the late innings, Mayes transitioned to Tuesday starter last month with limited success. Following three shaky starts, he put forth a quality effort this week in Tuesday’s win over Prairie View A&M, striking out five and allowing two runners in four innings.

“I think we’re still on the start of an uphill climb,” Johnson said. “There’s still bits and pieces of confidence that he’s gonna go out and perform at times. When he gets hit in the mouth, we’ll see if he’s had enough success to overcome that.”

Augie Garrido: “No choice” but to miss Saturday’s game for immigrant award