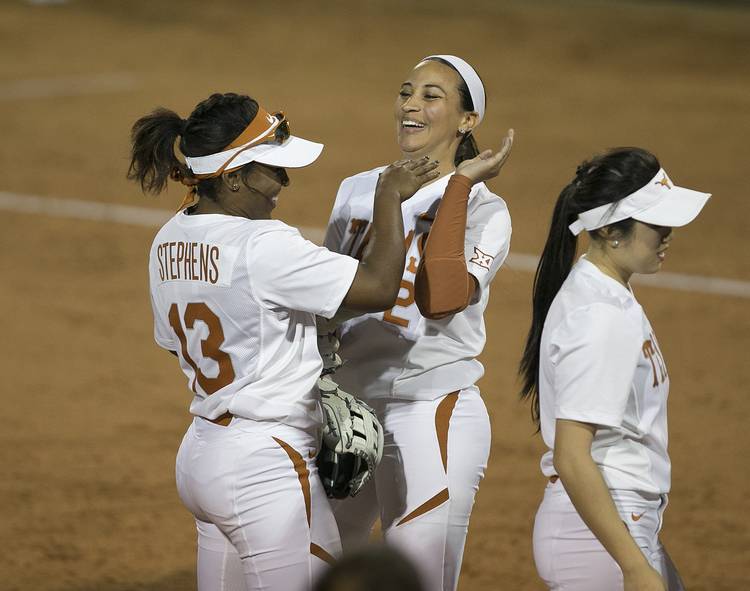 For the past month, the Texas softball team has focused on closing out the regular season with a bang, and the Longhorns have turned heads nationally, winning 10 of their last 11 games.

Now they have to hope that the NCAA selection committee has paid attention to that recent surge and seeds them accordingly when the NCAA regional matchups are announced Sunday night.

Texas (37-14, 10-7), which is ranked No. 26 in the latest RPI, has one more chance to impress — the regular-season finale Saturday night at home, against Baylor. It’s Senior Night for the Longhorns, as Lindsey Stephens, Holly Kern, Rachel Scott, Erin Shireman and Stephanie Ceo will be honored.

“It’s super surreal, and it hasn’t really hit me yet that my career at Texas is almost over,” Ceo said. “… You work so hard to become a collegiate athlete, so it’s a little bittersweet for my career to be coming to a close.”

Baylor, with an RPI of 13, took two games from Texas in Waco at the beginning of conference play and has already guaranteed itself a second-place finish (behind Oklahoma) in the Big 12; the Bears are likely to host a regional.

“Our senior class has provided such solid leadership for our program over the last four years in so many ways. It will be an emotional day for all of us,” Texas coach Connie Clark said.

After a 4-0 mark last week, which included a win over North Texas and a series sweep on the road at Iowa State, Texas climbed back into the national rankings, at No. 25. The Longhorns hadn’t been ranked since March 8.

Texas hit .476 as a team during last week’s sweep of Iowa State. That included 10 home runs and 18 extra-base hits; the Longhorns outscored the Cyclones 39-5. It was a big week for Stephens, too; she earned Big 12 player of the week honors for the third time this season.

In four games last week, she hit .571 (8-of-14) with 11 runs scored, two doubles, four home runs and seven RBIs. She homered in all three games at Iowa State.

What’s going on with Texas baseball? For starters, some historically bad numbers