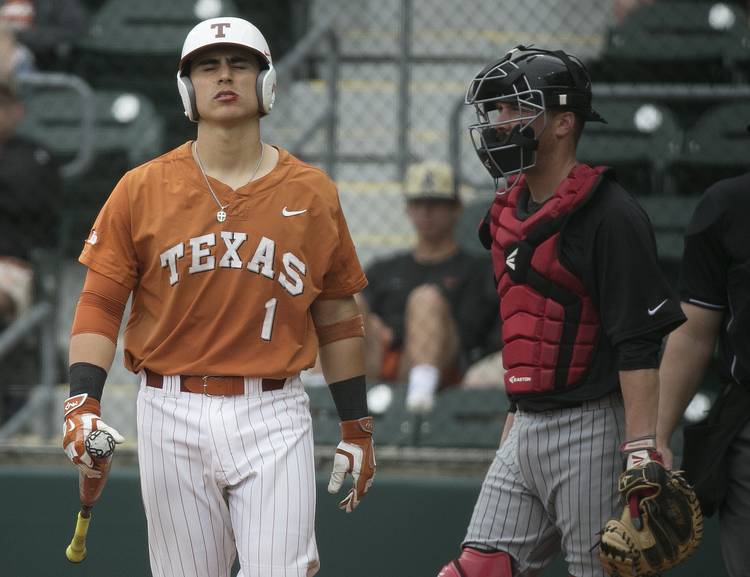 Texas's Tres Barrera walks out to bat with a red lip after being hit by a foul ball against UNLV during their win on Sunday, February 21, 2016. DEBORAH CANNON / AMERICAN-STATESMAN

In a season that can’t get over soon enough, Texas is doing what it can to help.

Thursday’s 2-1 loss to Baylor took just 2 hours, 20 minutes to complete, which is more in line with the length of a featured film than a college baseball game.

There were zero walks and 32 one- or two-pitch at-bats — 16 for each team. Through one game, neither side seems to be overly interested in prolonging this final weekend before next week’s Big 12 tournament.

Speaking of which, Texas has to hold off making travel plans for Oklahoma City because the Longhorns still have not secured a berth in the eight-team field. It can come with a win on Friday or Saturday, but considering the Horns’ Big 12 losing streak has now reached seven in a row, that’s anything but a lock.

Rather, the more likely path is last-place Kansas losing at Oklahoma State. Those teams will plays twice on Friday and again on Saturday.

“I don’t think it’s (weighing) on us too bad,” second baseman Jake McKenzie said. “If Kansas loses one, we’re in, and if we win one, which we feel good about, we’re in.”

Thursday’s loss means for the first time in Augie Garrido’s 20 seasons at Texas, the Horns will not be on the right side of a series sweep. The loss also dropped UT’s record in one-run games to 2-11, a mark that also includes Tuesday’s 3-2 loss to Texas State.

With the win, Baylor (22-26, 9-13) draws even with UT (21-29, 9-13) in the conference standings. The winner of the series will be in play for the sixth seed in the tournament and an opening round matchup against Oklahoma State or TCU.

“It doesn’t change the goal,” Garrido said. “The goal shifted to the tournament long ago.”

Trying to put together a rally, Texas had the tying run on third in the eighth. But with the count full, Tres Barrera chased a pitch up and out of the zone to end the threat. Displeased with calls from earlier in the at-bat, Barrera had some words for home plate umpire Mark Winters as he retreated to the dugout.

“The pitch was in somewhat of the same area,” Garrido said.

On the night, Texas had six hits and none off of Baylor starter Drew Tolson (6-3) until Travis Jones laced a single to left to open the fourth. Jones had two hits, as did McKenzie. Barrera had the lone RBI when he ripped a liner that third baseman Steve McLean couldn’t handle in the sixth. A chance to rally in the seventh was squashed when Baylor second baseman Justin Arrington dove up the middle and then made a splendid flip to second for an out.

“How did the second baseman knock that ball down?” Garrido said.

In the ninth, Troy Montemayor retired UT in order for his Big 12-leading 13th save.

“Of course you’re gonna do that when you need momentum, if you need to feel good about yourself,” Garrido said.

Otherwise in control all night, Texas was sloppy in the field in the fifth, which led to Baylor’s two runs. Neither  were charged to starter Morgan Cooper (2-5), though his hands were dirty after he hit Josh Bissonette to start the inning before throwing errantly to first on a sacrifice bunt by Austin High’s Richard Cunningham. Both baserunners came around to score for Baylor, which is on a bit of a hot streak after taking two of three from TCU last week.

“One bleep on the radar and then we didn’t cover the spread,” Garrido said.