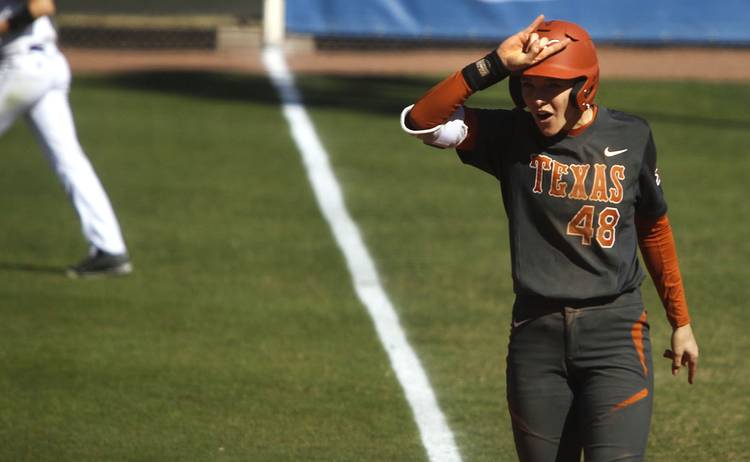 Texas’ road to Oklahoma City is full of obstacles.

But first, the Longhorns (37-14) will likely have to beat two nationally-ranked teams, including rival No. 16 Texas A&M (37-8), just to get out of the Lafayette Regional in Lafayette, La.

Texas and the Aggies will play in the opening game of the three-day tournament Friday. First pitch is scheduled for 3:30 p.m. and the game will be televised on ESPN2.

Should the Longhorns get by Texas A&M in the teams’ first meeting since 2012, a likely matchup against No. 9 Louisiana-Lafayette (43-7) will be played Saturday at 11 a.m. In 2014, Texas lost to the Ragin’ Cajuns twice while playing in the Lafayette Regional.

Added to the list of hurdles Texas might have to overcome is the heavy rains that are in the forecast all weekend.

“Our mentality is that we all get 21 outs and we have to understand how to make the most of our opportunities,” said Texas coach Connie Clark. “We have our work cut out with this regional and we have to go in there and take care of business.

“We get to start the NCAAs against one of your biggest rivals,” Clark said. “A lot of our kids played with and against the players on Texas A&M when they were on club teams growing up and they’ve been doing their part to give scouting reports, even though they might be a bit dated.”

Texas junior first baseman Kelli Hanzel said she expects the game against Texas A&M to be really competitive and for emotions to be high.

“It’s going to be decided by which team goes in with a game plan, executes that plan and makes adjustments when they’re needed,” Hanzel said. “We will take things one game at a time, one pitch at a time and keep things as simple as we can.”

Texas will be going into this weekend with much needed depth in the circle, despite losing ace Erica Wright, a sophomore, before the season got underway. Wright’s injury has allowed Texas to build its pitching staff.

Junior Tiarra Davis (19-14) is the Longhorns’ go-to pitcher, but sophomores Paige von Sprecken and Kristin Clark have provided several quality innings during the season and will be asked for more this weekend.

“We are about as healthy as we’ve been all year with our pitching,” Clark said. “We’ve had a good opportunity to rest their arms and we are as good and fresh as we can be for this time of the season.”