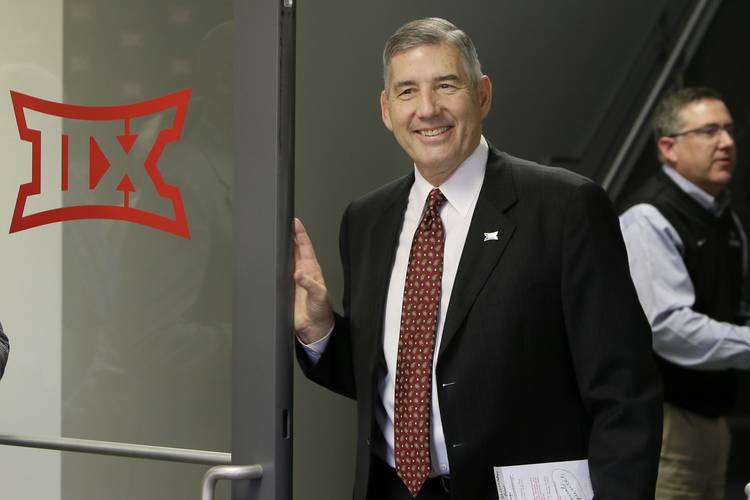 Big 12 commissioner Bob Bowlsby, left, smiles as he listens to a reporter's question as he leaves a new conference after a meeting Friday, Feb. 5, 2016, in Irving, Texas. (AP Photo/LM Otero)

Conference realignment, at least in this part of the country this go-around, has become a mind-numbing topic with seemingly no end in sight.

It’s an unescapable topic in Big 12 quarters, even if things are quiet at the moment in the other so-called Power 5 leagues.

There are individual questions the Big 12 must address this summer, like whether the 10-team league should expand by two members. Or should the league add a championship game now that it has NCAA approval to do so? And, perhaps most important in the long run, should the Big 12 create its own league-wide television network? And would Texas ever surrender its Longhorn Network?

None of these questions can be answered on their own. They’re all tied together, each one affecting the other.

There’s a strong possibility nothing happens at all, as some administrators may believe the correct move is no move. But if there’s a mandate for change and expansion, a vote isn’t likely until August or later and would require a super-majority of eight votes.

“I think our league is highly competitively stable,” said Big 12 commissioner Bob Bowlsby, who has yet to reveal his opinion on these issues publicly. “I think we have a good alliance, and we need to make sure we’re constantly diligent in making it as good as we can be.”

At least one Big 12 athletic director told the American-Statesman the conference does not need to expand to survive.

“No, we do not,” he said last week. “I think everyone likes the Big 12 and our 10-team league and the path to the championship. To me, we’re more united on brotherhood and sisterhood than ever, and we’re committed to that. It’s a question of how do we strengthen our position moving forward — or do we even need to?”

An influential Texas source puts the likelihood of expansion for the Big 12 at 15 percent. The source said the Longhorns could eventually go elsewhere, but not before the grant of rights involving first-tier television rights for marquee football and basketball games expires in 2024.

Would Texas ever consider leaving the conference?

“Hell, yes,” he said. “Broadcast rights are pledged through 2024. That is eight years of forced marriage. I see another realignment at that time, if not sooner. The Texas-OU football game would survive regardless of a league change.”

Would Texas leave before 2024?

Something has to change, it seems. The Big 12 distributed $252 million in revenue last May, which was a league record. However, that pales in comparison to what the SEC ($527.4 million) and Big Ten ($448.8 million) distributed.

And where do Texas officials stand on these issues? UT President Gregory L. Fenves, known for listening, internalizing and then taking action, is playing his cards close to the vest.

“I’m not going to address it,” UT Chancellor Bill McRaven said. “That’s in President Fenves’ court. He is the representative to the Big 12 from the University of Texas at Austin. I know he will be very thoughtful — both he and (athletic director) Mike Perrin — in how he deals with this.”

Bowlsby will stand before school administrators at the league meetings May 31-June 3 in Irving and attempt to hash things out. It’s thought no significant action will happen at the Four Seasons Resort and Club.

“We’re just talking about data,” the athletic director said. “Speculation has gone rampant. The depth and strength of our league is phenomenal.”

From reading the tea leaves, it appears no final decision may come until August or later.

Administrators at those schools wishing to get invited are all saying the right things. Some are focused on being proud members of the American Athletic Conference, or so they say.

“We monitor every tweet, every article, every comment, every president’s speech,” Bohn said. “We’re engaged on all those different levels. I’m a big believer in leadership models of anticipation. We’ve got to anticipate different moves.”

Memphis is straight up trying to buy its way in. The school’s lower academic profile scares some Big 12 administrators. But FedEx chairman Frederick W. Smith promised the shipping company would sponsor a football title game. And Memphis officials promise to spend $500 million in upgrades.

West Virginia officials promised to lengthen a runway and upgrade a nearby airport once the Mountaineers got into the Big 12. That never happened.

“We strongly support the university’s efforts to become a member of an expanded Big 12 athletic conference,” Smith told the Memphis Commercial-Appeal.

There’s a strong possibility the league will do nothing. In fact, Kansas State athletic director John Currie said exactly that earlier this month. “I could make a great argument, personally, that I would rather just stay at 10,” Currie told K-State reporters.

That doesn’t appear to jibe with Boren’s thoughts. Boren, who believes the league is “psychologically disadvantaged,” has openly pushed for expansion. So has West Virginia president Gordon Gee.

Boren may have overstepped his bounds recently, though. Max Weitzenhoffer, chairman of the Oklahoma board of regents, told CBS Sports, “We’re not on the same page.” It was widely perceived as public rebuke of the hard-charging OU president.

“We just want to let (Boren) know, we don’t like it,” Weitzenhoffer said. “If it goes forward, it may get to the point where we may not be able to stop it.”

That prompted OU officials to release statements that made it appear all was swell.

“I remain firmly committed to my belief that we should all work together to make the Big 12 Conference even stronger through holistic reform,” Boren said in the statement, “that allows for possible expansion and the creation of a Big 12 network.”

Weitzenhoffer’s statement read in part, “I am confident that our President will lead the university in the right direction on matters related to the Big 12 Conference. He has and will continue to have my full support.”

Meanwhile, the SEC and Big Ten are poised to put a significant financial gap between them and everyone else. Bowlsby has said that’s not the sole criteria for evaluating a conference’s strength, simply one of them.

Tax returns showed the SEC hauled in $527.4 million in revenues in the fiscal year ending Aug. 31, 2015. That figure represented a 60 percent jump from the previous year. Money collected from the College Football Playoff and the formation of the SEC Network were the primary drivers.

At the end of the 2014-15 athletic year, the SEC announced each school would receive a payout worth $31.2 million.

The Big Ten recently signed a new six-year TV deal worth $1.5 billion for only half its inventory. When the other half is completed possibly later this summer, Sports Business Journal projects that 12 of the 14 Big Ten schools could get as much as $44.5 million annually.

Maryland and Rutgers aren’t fully vested until they have been in the league for six years. Those schools joined the Big Ten prior to the 2014-15 athletic year.

Bowlsby called it “a softer TV market than what we encountered a couple of years ago.”

In a 20-year deal with ESPN, Texas gets approximately $15 million annually for Longhorn Network. The Texas source said the school is unlikely to give up such a powerful branding tool and recruiting exposure for even the same money it would recoup in a Big 12 Network.

School officials believe the Longhorns will get things figured out on the football field again, and they’d still have their own channel.

It’s unclear whether TV executives can design a financial package with 12 conference teams that dramatically move the needle. It’s not 2011 anymore. ESPN is battling cord-cutters and shedding payroll as cable subscribers move away from traditional subscription models.

If the Big 12 doesn’t fully answer all of these questions this summer, the saga only continues.

RELATED COVERAGE: Texas AD Mike Perrin on a Big 12 Championship Game: ‘I could argue it either way’

Big 12 expansion primer: Everything you need to know