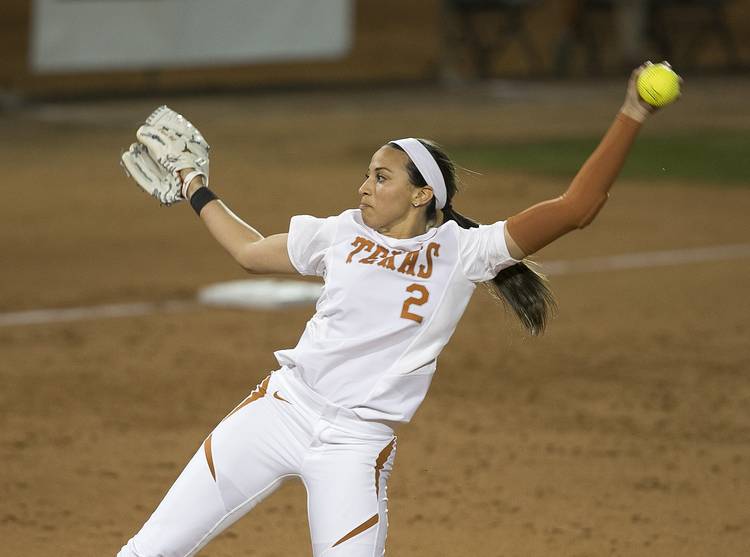 UPDATE: 7:45: Texas lost to Texas A&M 9-3 in its final game Saturday. The Longhorns have been eliminated from the NCAA Tournament.

Less than 24 hours after shelling five solo-home runs to defeat No. 16 Texas A&M 5-0 on Friday, the Longhorns (38-15) bats were silenced by the Ragin’ Cajuns, which administered a 9-1 defeat before a crowd of 1,709 at Lamson Park.

“It’s all about resetting and having that competitive attitude,” Texas pitcher Tiarra Davis. “It’s about having that strong mentality that we want to be here. We want to advance to the super regionals.”

The loss dropped Texas to the losers bracket, where the Longhorns faced elimination in the evening re-match with rival Texas A&M, who beat Boston University 6-0.

Louisiana-Lafayette showed why its regarded as one of the nation’s top-hitting teams against Davis, who allowed a season-high six earned runs and 13 hits.

The Ragin’ Cajuns had 11 singles to go along with two pivotal extra-base hits – a two-run homer by Shellie Landry for a 3-0 lead in the third inning and a two-run double from Lexie Elkins in the sixth to give ULL a 6-0 advantage.

Davis (23-10) walked four against Louisiana-Lafayette’s patient approach at the plate and struck out six. The left-hander was extended to 152 pitches in a 2 ½ hour game played under a 90-plus degree heat index.

“We’re in Cajun Country and the crowd’s going to be great, we enjoy playing in front of that,” Texas coach Connie Clark said. “We tip our hat to their hitters. We’re going to have to figure out how to trade runs to be able to get all the way through this tournament.”

Before Louisiana-Lafayette pulled away with six runs on nine hits over the final three innings, Texas piled up six hits and threatened in each of the first three innings against winning pitcher Alex Stewart.

The Longhorns stranded runners at third in the first two innings, while Kelli Hanzell was thrown out for the final out trying to stretch a single in the second inning.

Freshman Reagan Hathaway was held up on the play by third by base coach Jennifer McFalls, but Hanzell continued when Landry’s throw came home to Elkins, who threw to second base where Haley Hayden applied the tag.

“It’s a total base running miscue,” said Clark. “You try to be aggressive, try to make something happen and they make a great throw on it. They know we don’t want to make the final out at second base.”

Louisiana-Lafayette answered its big defensive play with Landry’s two-run homer just inside the foul pole down the left-field line. It was Landry’s 16th of the season and her team’s 100 for the second consecutive year.

Stewart (28-4) yielded eight hits, struck out three and walked none in an 81-pitch outing. She lost her shutout bid with two outs in the seventh on Lindsey Stephens’ homer – her 15th of the season and seventh in her last five games.

“We’re just going out against no matter who’s in the other dugout, that we’re going to play them like we want to play for the World Series,” Davis said.

Despite another lame loss, Texas backs into Big 12 baseball tournament

One more year? Augie Garrido pleads for job after win over Baylor