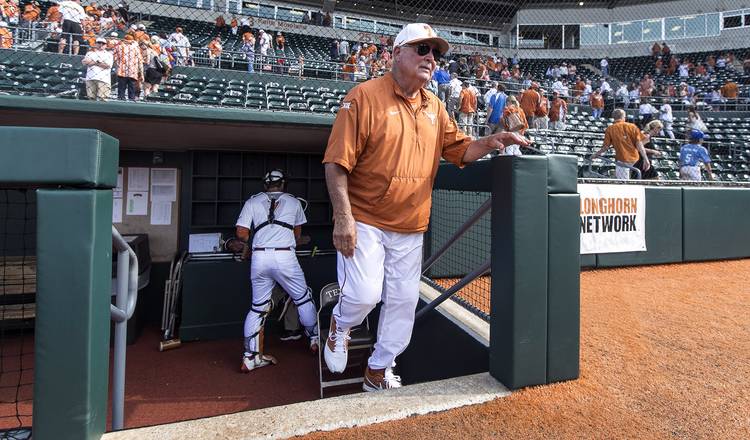 Before coaching in what could be his final game at the Disch, Augie Garrido heard an eruption.

Lounging around the clubhouse Saturday afternoon, his Texas baseball players broke into celebration watching the Longhorns softball team in an eventual regional loss to ninth-ranked Louisiana-Lafayette.

Garrido still has a team to call his own, and following Saturday’s 7-6 win over Baylor he was practically begging for a chance to keep it for one more year.

For the second time in four days, Garrido maintained that even though his team has been wildly disappointing with 30 losses, he will not resign with one year left on his contract. He wants to right this wrong and leave the program in a firmer place than it currently resides.

That being said, the game’s all-time winningest coaching admitted the realization that this might’ve been his final time coaching at home “crossed my mind.”

“I want to finish next year and I will do all I can to convince the powers that be that I’m capable of turning it around because I have five times in the past and I’ll do whatever it takes and make any adjustments I need to make to turn it around,” Garrido said.

Garrido’s best argument for keeping his job is to go win the Big 12 tournament, which starts for Texas (22-30, 10-14) this Wednesday against second-seed Oklahoma State at Chickasaw Bricktown Ballpark in Oklahoma City. It’ll start at 7:30 p.m.

To win the tournament and advance to the NCAA postseason, the Longhorns, who are seeded seventh, will have to win four games in a row, which they have not done to this point.

Saturday’s triumph snapped an eight-game Big 12 losing streak, but otherwise was meaningless and had no impact on UT’s placement in the tournament bracket.

Michael Cantu, who has been mired in a sophomore slump, had three singles including the go-ahead RBI in the seventh inning. Zane Gurwitz (4 for 4) and Kody Clemens (3 for 4) also had multi-hit games, as the Horns scratched together 13 hits to overcome three errors in the field.

Bret Boswell, who has also turned in a disappointing sophomore campaign, started at shortstop and broke out of an 0-for-13 skid with an insurance RBI in the seventh.

Cantu, who entered the day hitting .189, was in the lineup for just the fourth time this month. He led off the fourth with a single and got the Horns on the board when he scored from third on Tyler Rand’s fielder’s choice.

Good news for Cantu: Garrido said “we have to” find a spot in the lineup for the catcher/designated hitter.

“It’s always tough,” said Cantu, who started at catcher. “There were points where it wears on you. That’s where good ball players are separated from the great ones. I had a rough year. Started off hot and just never got going. It’s never broken my spirit.”

Likewise, Garrido believes the spirit of his ball club is in tact, and he credited himself for making sure his team hasn’t splintered in such trying conditions. That his players watched the UT softball game together might speak to the kinship they still share.

Capitalizing on fielding errors by UT’s Jake McKenzie and Boswell, Baylor (24-27, 10-14) took a 5-4 lead with three runs in the seventh. Two of the runs came on a single up the middle by Austin High’s Richard Cunningham. Cunningham, the No. 9 hitter, also homered in the ninth off of Chase Shugart to make it a one-run game.

Left-hander reliever Travis Duke had a proud moment in his final appearance at home, entering the game in the eighth and inducing a 4-6-3 double play to get out of the job.

Duke’s days at the Disch are over. Garrido’s might be as well, but he promises to go down swinging.

“If they’ve decided it’s now, I still have a million ‘thank yous’ for all the excitement this has created and brought to my life,” Garrido said.