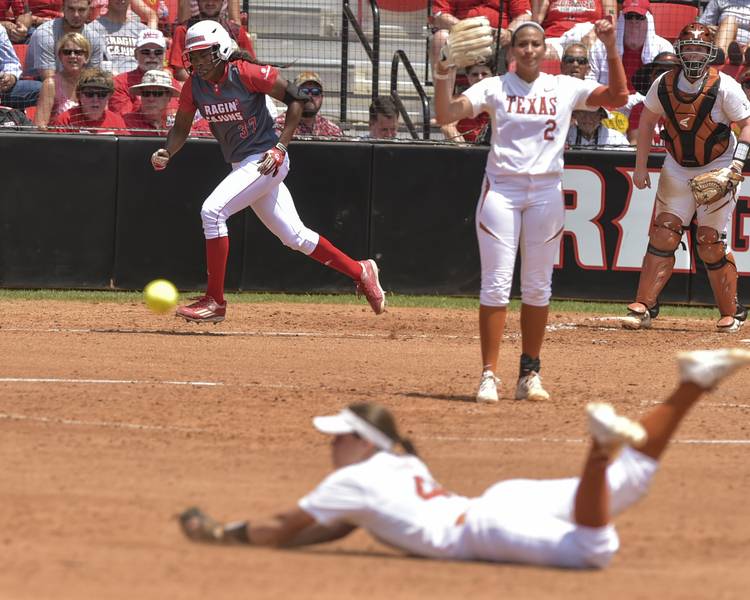 LAFAYETTE, La. –Texas and Texas A&M softball teams made up for lost time, facing one another in a high-stakes contest with the result ending the other’s season.

It was almost like old times for the two former rivals that hadn’t met in a game since 2012 before this week. They played twice in a two-day span, but the rivalry was superseded by the two teams trying to keep their respective season alive.

No. 2 Texas A&M broke a 3-all tie in the fourth inning on Tori Vidales’ two-run single, sparking a stretch of six unanswered runs that enabled the Aggies to eliminate No. 3 Texas, 9-3, Saturday evening from the NCAA Lafayette Regional.

Texas (38-16), which opened with a 5-0 victory over Texas A&M on Friday, lost consecutive games Saturday, the first loss coming 9-1 to Louisiana-Lafayette.

The Aggies (39-19) advanced to Sunday’s championship game at 3:30 p.m. where they must twice defeat Louisiana-Lafayette to reach next week’s super regional round.

“You feel for the seniors,” Clark said. “I thought they did some amazing things for us. They walk away with their heads held high. I don’t think they come out of this weekend with a lot of regrets.”

Texas scored an unearned run in the second inning and rallied to tie the game an inning later at 3-3 on Holly Kern’s two-run homer in the third.

“I thought it was going to be a good momentum shift in our direction,” Kern said of Texas’ seventh homer of the regional and first with a runner on base.

Texas A&M, which earlier staved off elimination with a 6-0 win over Boston University, distanced itself with six unanswered runs after the fourth inning.

Clark tried to stymie A&M’s offense, bringing back Friday’s winner Tiarra Davis, who shut out the Aggies on five hits.

Davis, who threw 152 pitches against Louisiana-Lafayette and a total of 230 on Saturday, came on in relief in the fourth of Paige Von Sprecken and yielded six runs on five hits. She walked four and struck out three.

“I didn’t feel we were going to get the full game out of Tiarra,” Clark said. “Once we tied it, we felt we had to go with it at that point.  She gave us a good effort. We felt it would be a test of wills on both sides. We needed to score more runs as well.”

Vidales (2-for-2) broke the tie and A&M, which registered 10 hits, scored twice in the sixth and seventh innings, capped by two-out hits in the final inning from Erica Russell (2-2) and Keeli Milligan (2-2).

A&M’s Samantha Show (25-9) was the winning pitcher in both games, throwing a pair of complete games. She retired 12 of the last 14 Longhorns she faced, walking two and striking out five.

“I was hoping it would be a bit of a heavyweight fight and trading runs, but that didn’t happen,” Clark said. “It got away from us.”

One more year? Augie Garrido pleads for job after win over Baylor