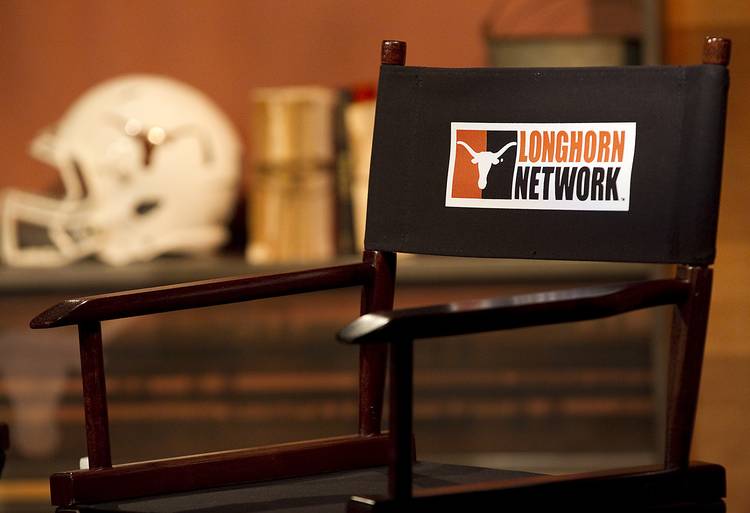 The Longhorn Network generates approximately $15 million annually for the University of Texas. The contract runs through 2031. Ralph Barrera/AMERICAN-STATESMAN;

The Southeastern Conference toyed with the idea of establishing a television network back in 2009, when its major TV rights were expiring with ESPN and CBS and were up for negotiation.

But the economy was in recession. Then commissioner Mike Slive elected to wait. Two years later, he raided the Big 12 for two of its teams — Texas A&M and Missouri — and added the schools for 2012.

It expanded the SEC to 14 teams. But most important, the two new schools allowed the SEC to increase its cable footprint by more than 10 million homes.

The SEC Network was created in time for the 2014 season, and it’s been akin to a mega bonus slot-machine win for the conference. As the network approaches its second anniversary, it’s been valued at nearly $5 billion.

Coaches and administrators in the Big 12 certainly noticed the first big payout each SEC school received last May. Who didn’t? It was record money, with schools from A&M to Vanderbilt to Kentucky to Alabama each receiving $31.2 million. Just by adding the SEC Network, which has been valued at $4.77 billion, the payout increased by nearly $11 million per school.

Meanwhile, the Big 12, already the smallest by number of teams, could slip behind the other four Power Five conferences in the amount of money doles out per school. It’s why the idea of expansion, or at least adding a football championship game, will be on the agenda next week when the Big 12 presidents and athletic directors gather in Irving for their spring meetings. It’ll take a super majority of eight schools to agree to expansion invitations.

But the lucrative television money may be more bust than boon these days, given the slipping fortunes of the cable sports networks.

Still, there is desire for a conference-wide network.

Last fall, Oklahoma president David Boren started pushing for the Big 12 to expand by at least two teams. He also wanted ESPN to dissolve Texas’ Longhorn Network and add one focused on the whole conference.

“If we don’t eliminate the Longhorn Network and create our own network, they’re going to continue to have issues with this league,” Gundy told CBS Sports.

What’s happening with the Big Ten is telling as the conference negotiates the last major sporting rights deal of the decade. It could be a harbinger of future problems. ESPN already low-balled the Big Ten, which allowed Fox to step in.

Why would ESPN do that?

The cable network, which reportedly accounts for a quarter of parent-company Disney’s operating profit, is in the midst of belt tightening.

In 2011, ESPN reached 100 million households, equivalent to the entire country’s cable market. But that number, as of last year, had dropped to 92 million and probably will continue to decline, given a disturbing trend for cable networks.

Younger people are choosing to cut the cable cord and go with more of an a la carte, live-streaming approach to watching programming on their laptops or smart phones.. Other subscribers are cutting costs by dropping the more expensive television packages.

The Weather Channel has lost 11.2 percent of its subscription base since 2011; ESPN has dropped by 7.2 percent and Nickelodeon has declined by 6.9 percent.

This spring, Sports Business Daily reported that rather than negotiate with the Big Ten, ESPN made a “non-competitive offer.”

RELATED COVERAGE: Big 12 expansion primer: Everything you need to know

With the money not as much as expected, the Big Ten agreed to divide up its rights package, with Fox reportedly buying 50 percent of the conference’s inventory for the next six years at a cost of $250 million. The deal allows Fox to broadcast 25 football games and 50 in basketball.

The previous Big Ten deal was for 10 years at a cost of $1 billion.

ESPN is expected to bid on the second package, along with CBS, Turner and NBC, for the rest of the Big Ten’s inventory of games.

ESPN already has pushed off its plans for a network for the Atlantic Coast Conference. It’s been in the works since 2013. If it’s not on air by July 1, ESPN would have to pay the ACC $45 million, according to a report in Gridiron Now. The $45 million would be divided by the ACC schools and probably would allow the league’s annual payout per team to exceed the Big 12’s.

The Pac-12 network also has struggled a bit. This week, Fox and ESPN modified its contract and agreed to reduce the number of conference night games shown on the Pac-12 Network.

The Big 12’s television deal was last negotiated in 2012. The conference inked 13-year deals with both ESPN and Fox for its first- and second-tier rights for a combined $2 billion. It allowed schools like Baylor, Iowa State and Kansas State to do massive renovations to their athletic facilities.

Third-tier rights of games not picked up by the networks belong to each school. Each one has signed a deal with a cable company.

Financial details weren’t available for most contracts, but Fox bought Oklahoma’s third-tier rights for $58 million over 10 years. West Virginia bundled its television along with its radio and on-line rights and sold them to IMG College for $80 million.

In its deal with ESPN, Texas receives $15 million annually from the Longhorn Network.

If there ever is a Big 12 Network in the near future, those individual long-term deals would have to be resolved.

The Big 12 will announce how its annual revenue will be distributed next week. A year ago, the conference divided a revenue pool of $252 million. Eight schools, including Texas, Texas Tech and Baylor, received a share between $25.5 and $27 million. The share depended on how many teams qualified for an NCAA playoff or championship.

But given how much money is out there for other leagues, the Big 12 will look at the viability of a network.

Said Iowa State athletic director Jamie Pollard: “Financially for the last several years a network has been very lucrative to the SEC and to the Big Ten, which is one set of facts.

“On the other side of it, the current model’s been very advantageous to all the 10 members of the Big 12, including Iowa State, because we really like what we’ve been able to brand with Cyclones.tv, and I would say that’s contributed to our rise in attendance, donations and revenues because we’ve been able to do what we need to do, which is get exposure in the state of Iowa for those factors. But you have to weigh those factors against what’s the long-term financial interest for the 10 members in the league and, again, that’s where it gets back to, if it was a black and white, easy decision, it would’ve already been made, but it’s not. It’s really complicated and any one of those tentacles you go down you can get to another fork in the road.”

When each Power 5 conference’s TV rights deals are set to expire:

A blast from the past: Texas crushes Baylor, stays alive in Big 12 tournament