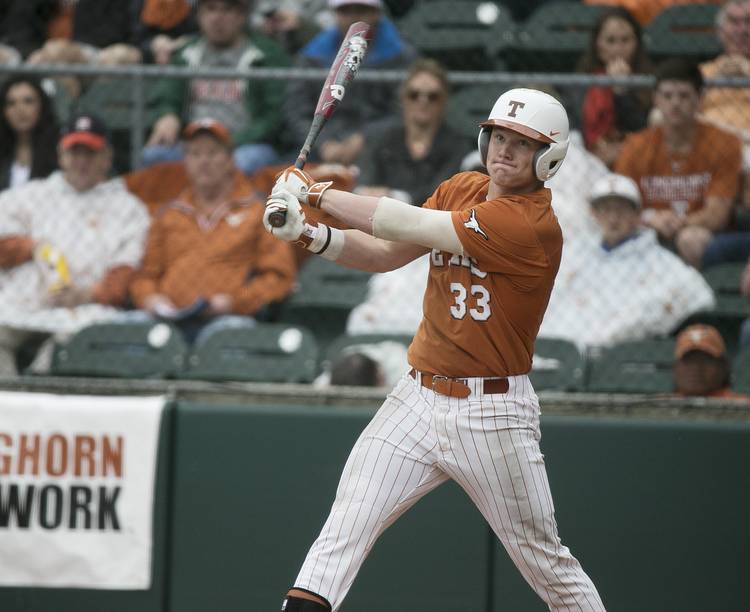 This fact is unremarkable, but Rodriguez brought it up Thursday as a way of complimenting Texas, which in a 15-3 seven-inning thumping of his team ensured that Garrido will coach at least one more day with his team.

In watching the Longhorns blast three home runs and two triples at Bricktown Ballpark, Rodriguez was reminded of Garrido’s hellacious Fullerton teams that dominated the left coast for decades and elevated him into a coaching legend.

“Really aggressive. Just did a lot of things from pitching to defense,” Rodriguez recalled from the early 1990s.

Garrido’s current team can’t compare with any sort of consistency, but this advancement in the consolation bracket proved the Longhorns (23-32) aren’t completely deficient of talent. It also proved they haven’t quit on their season, or on their coach, who — let’s face it — deserved to be on the good side of an offensive outburst if this indeed was a farewell gift.

“I thought it was awesome,” Garrido said of his team’s response to Wednesday night’s 10-4 loss to Oklahoma State. “Best game we’ve played in a long time. Could have very easily been Coyote Ugly.”

This was the first time in 55 games that every player in UT’s lineup had a hit, and, while sticking with the topic of firsts,  it was the first complete game for sophomore starter Morgan Cooper.

Texas’ 3, 4, 5 and 6 hitters accounted for each of UT’s 14 RBIs — four each from Tres Barrera and Patrick Mathis, and three from Travis Jones and Kacy Clemens.

The seven runs Texas put up in the seventh — all with two outs — were its second most of the season for a single inning.

The hope is the Horns, whose path to the Big 12 title would include five wins over four days, didn’t use up all of their explosion. They’ll want to stay hot for another elimination game, which will be Friday against Oklahoma State. First pitch is set for 7 p.m., and Texas will have a rested bullpen behind starter Kyle Johnston.

As Big 12 commissioner Bob Bowlsby was holding court with reporters on Baylor’s firing of head football coach Art Briles, the Longhorns erupted in the first inning for a 3-0 lead against starter Drew Tolson. Following RBI singles by Jones and Clemens, Mathis ripped a triple to left-center.

This was a vast departure from eight days earlier when Tolson put clamps on Texas, which managed just one run in eight innings against the right-hander in a 2-1 loss. In Thursday’s rematch, Tolson couldn’t get ahead in counts and lasted just 2 1/3 innings and was charged with seven runs.

Asked if his club was distracted over the events back in Waco, Rodriguez, responded simply, “No.” In two tournament games, Baylor was outscored 27-8.

Shortly before he was lifted, Tolson served up consecutive home runs to Barrera and Clemens. Barrera’s blast was a rocket that dropped in Baylor’s bullpen in left-center. Clemens’ landed on a hill beyond center field, registering at maybe 415 feet. Texas’ third home run, a three-run blast by Patrick Mathis in the seventh, capped the scoring and provided the differential needed for a run-rule.

“I know we haven’t won many games, but this team has stayed together throughout it all,” said Barrera, who through two games is 5 for 9 with 6 RBIs. “We’ve been through a lot of fire, and usually when that happens, teams separate.”

Though the game was shortened, it counts as the first complete game for Cooper, who five times before exited a game after six innings. He gave up 10 hits and struck out three.

“It felt good to go out and finish in the seventh,” Cooper said.

Big 12 expansion: Every conference wants its network to be must-see TV

Big 12 expansion: Adding a conference title game is about more than the money