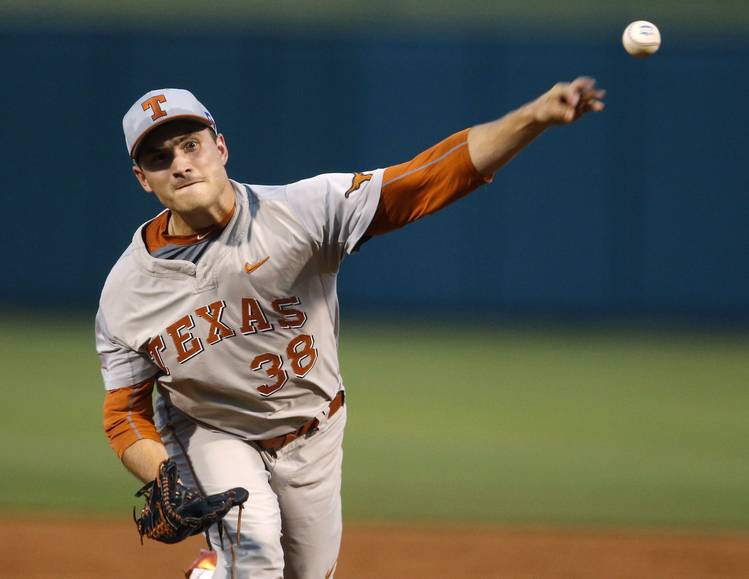 OKLAHOMA CITY — For two hours, the Texas baseball team had everyone fooled.

Yet soon enough, it was them looking rather foolish.

Initially playing like a focused squad determined to make a run in the Big 12 tournament, the Longhorns eventually revealed their true identify and got smashed, 10-4, by Oklahoma State.

The next loss, provided it comes this week at Bricktown Ballpark, will mark the end of this frightening season and possibly the 20-year run of legendary coach Augie Garrido. Starting Thursday against Baylor, the Longhorns must win five games over four days to repeat as Big 12 tournament champions and prolong their season into the NCAA postseason.

Through almost half off Wednesday’s game, it looked like Texas was serious about disrupting the bracket and sticking around OKC for a while. The Horns, seeded seventh, built a four-run edge on timely hitting, solid defense, and quick innings from starter Ty Culbreth.

However, after going ahead 4-0 in the fifth, things unraveled and UT found itself trailing 8-4 by the time OSU was done batting in the inning. That’s right: it was an eight-run inning for the Cowboys, who sent 12 hitters to the plate, had five hits — including Conor Costello’s grand slam to left — and induced three fielding errors for Texas. All of this from the Big 12’s weakest hitting team, which had four players in the lineup hitting under .240.

It got so ugly that during the middle of the inning Garrido pulled shortstop Joe Baker from the game after Baker’s second error of the inning led to a run.

“I thought it needed to be done,” Garrido said.

The eight runs are the most Texas (22-31) has allowed in an inning this season.

“We won the first half,” Garrido said. “However, it’s not football or basketball.”

Whistling along through four innings, Culbreth came unsteady in the fifth against the bottom of OSU’s order. With two on and no outs, he walked No. 9 hitter Collin Theroux, loading the bases and setting up a scoring barrage for the Cowboys (36-18). Baker’s first error preceded RBI singles by Corey Hassel and Donnie Walton. After recording the first out, Culbreth exited for Beau Ridgeway, who threw one pitch to Costello before serving up a grand slam, the eighth in Big 12 tournament history.

OK State coach Josh Holliday said after an emotionless start to the game his team “re-engaged the game in the bottom of the inning.”

Ridgeway, who had gone 17 2/3 innings without an earned run, ended his streak with one earned run.

Culbreth, who may have been making his final start at UT, went 4 1/3 innings with six runs (five earned). He struck out six and gave up seven hits.

“We haven’t been the greatest team this year with comeback wins,” centerfielder Zane Gurwitz said. “These teams aren’t beating us. We’re beating ourselves. That’s what we’ve been struggling with all season.”

For UT, Tres Barrera had RBI singles in the first and fifth innings. Gurwitz and Travis Jones also drove in runners.

In all, UT batters struck out 13 times, including three by Kacy Clemens.

Through one day of the tournament, everything has went as expected and the top four seeds advanced in the winner’s bracket.

Texas’ Andrew Jones had to grow up early before basketball stardom

Big 12 expansion: Every conference wants its network to be must-see TV