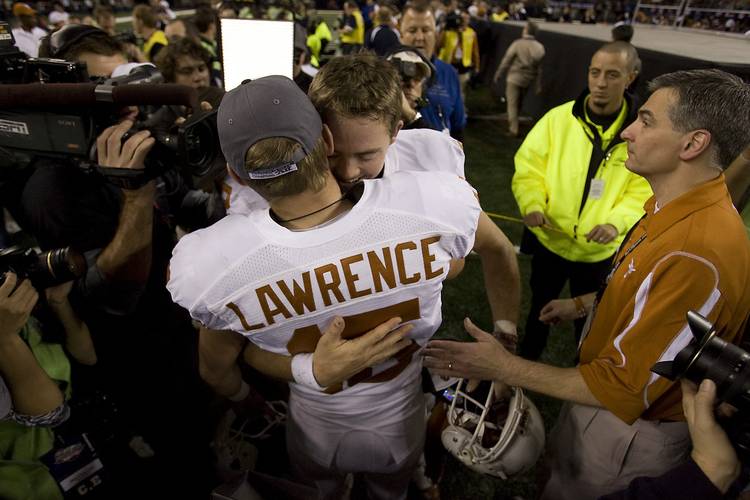 When wondering if the Big 12 will decide to return to the ways it once conducted business and play a football championship game, it would be wise to follow the money.

With up to $30 million to be gained from TV revenue and spread to its member schools, it seems like a no-brainer for the Big 12 to join the four other Power 5 conferences and match up its top two teams for the league title.

So why hasn’t it been approved already?

Well, because it’s not solely about the money or perhaps even primarily about the money. Instead, discussion from league officials about a title game ignores the allure of a financial windfall and orbits around the College Football Playoff, and specifically whether adding a championship game would help or hurt the conference’s odds of earning a berth to the postseason semifinals.

Yet there’s a problem, and it’s one that representatives of the league’s 10 schools must sort through next week in Irving when deciding which path to choose. Through two seasons, the CFP selection committee has provided contrasting evidence on the weight it places on conference title games.

IMPACT ON MAKING THE CFP

Proponents of the Big 12 needing to change point to 2014 when TCU and Baylor, with identical 11-1 records at the end of the regular season, sort of canceled each other and cost the conference a spot in the inaugural CFP. (A quick refresher: Baylor beat TCU 61-58, but otherwise had an unflattering regular season with a shaky loss at West Virginia and a non-conference slate filled with creampuffs SMU, Northwestern State and Buffalo.)

Immediately following the snub, sirens rang out for the conference to add a title game, something its advocates assumed that had it been in place would’ve pushed the winner of a Baylor-TCU title-game rematch into the four-team playoff field.

Maybe, maybe not. No matter how that game would’ve turned out, the winner would not have gotten a berth over top-ranked Alabama or second-ranked Oregon. And that’s probably also true for third-ranked Florida State, the undefeated defending national champion. So the committee was down to three choices — Baylor and TCU from the Big 12, and Big Ten champion Ohio State, which lambasted Wisconsin 59-0 in its title game. Of course, the committee ended up looking pretty smart when the Buckeyes knocked off Alabama in the semifinals and then Oregon for the CFP title.

So that’s the argument in favor of adding a championship game. The argument against it came in the most recent season when the Big 12 landed a CFP berth, albeit unofficially, before any other conference when Oklahoma capped an 11-1 regular season with a win over Oklahoma State.

The next week, while the Big Ten, SEC, ACC and Pac-12 all were playing title games to settle on their champions, Oklahoma was sitting at home, assured of an invitation to the playoff.

And hypothetically, let’s say there had been a Big 12 title game in 2015. Given the way the standings shook out, it would’ve been a rematch between Oklahoma and the same Oklahoma State team that the Sooners smoked by 35 points the week before.

Taking that hypothetical further, let’s say Oklahoma State came out mad and avenged the loss. In that scenario, the CFP committee would’ve been left with two undesirable choices from the Big 12 — the Cowboys, who lost their last two regular-season games after starting off 10-0, or the Sooners, who didn’t even win their conference.

For 15 years, the Big 12 played a championship game, and in three of them a team ranked No. 1 or No. 2 suffered a loss and was removed from consideration for the national title — Texas A&M’s shocker over second-ranked Kansas State in 1998 and Kansas State’s 35-7 upset of No. 1 Oklahoma in 2003. The conference killed its championship game after the 2010 season, when the departures of Nebraska and Colorado dipped the Big 12 to 10 schools. Tenth-ranked Oklahoma beat 13th-ranked Nebraska in that final title game, 23-20.

At the time, the NCAA required that a conference have at least 12 members in order to hold a title game. But that rule was reversed this past January by a 7-2 conference vote. It gave the Big 12 the option of playing a championship game without expansion.

WHAT WOULD TEXAS WANT?

It’s difficult to say which side Texas is on. In October, athletic director Mike Perrin spoke at the Texas Tribune Festival at UT and said he’s intrigued by the thought of a championship rematch from a regular season meeting, but noted that there are drawbacks. For his part, Longhorns football coach Charlie Strong said in April, “I like the way the system is set up right now.” His view is shared by at least two other Big 12 coaches, Oklahoma State’s Mike Gundy and TCU’s Gary Patterson.

As complicated as this decision may appear to be, it becomes quite simple if expansion is approved. Should that occur, and by all appearances it will be turned down or at least tabled, the league would likely split into two divisions again and a championship game would follow.

A blast from the past: Texas crushes Baylor, stays alive in Big 12 tournament