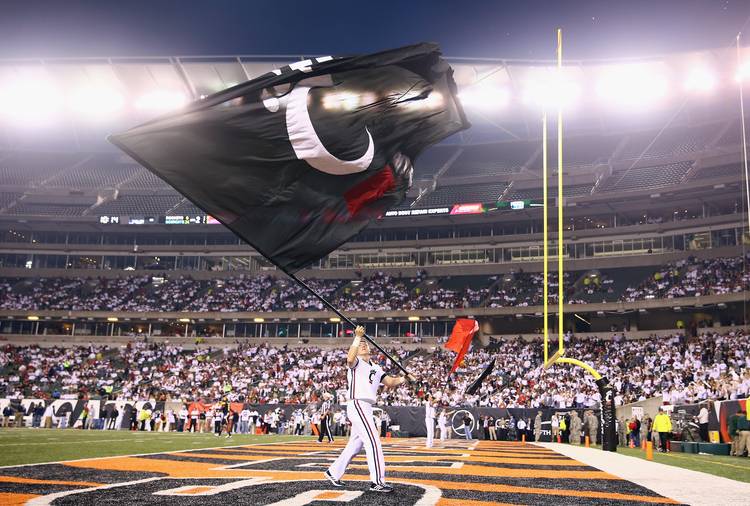 A cheerleader of the Cincinnati Bearcats waves a flag during the game against the Toledo Rockets at Paul Brown Stadium on September 12, 2014 in Cincinnati, Ohio. (Photo by Andy Lyons/Getty Images)

CINCINNATI — The biggest crosstown rivalry in the Queen City has nothing to do with the Cincinnati Bearcats or the Xavier Musketeers. The real crosstown shootout is found in chili parlors — Skyline vs. Gold Star.

On this debate, University of Cincinnati athletic director Mike Bohn has a clear favorite. He quickly finds two countertop seats at the Skyline Chili location just north of campus, and within minutes, the waitress is tying plastic bibs around our necks. “Oh, yes, this is happening,” she said.

If Cincinnati ever joins the Big 12 Conference, Texas fans should try Skyline’s signature “5-way,” a pasta, bean, onion, chili and cheese concoction that is to die for and one you’ll die from. They’ll bring you a chili-and-cheese coney to go with it, because why not?

“Hey, like I told you, all I can do is put my head down and focus on what’s best for Cincinnati,” Bohn said, digging into his lunch. “Is this place great or what?”

But that’s the real question: Will the Bearcats ever get that call from Big 12 commissioner Bob Bowlsby? And should Bowlsby even call anybody for expansion? BYU, Houston, Connecticut, Memphis and Central Florida all have various pros and cons.

Big 12 expansion talks — should we or shouldn’t we? — will dominate league meetings next week in Irving.

One influential Texas source said school officials are reluctant. The source pegged expansion chances at 15 percent. And yet UT mega-booster Red McCombs said this week the Big 12 should’ve added Houston two years ago. The 12th team is “your choice,” he said on ESPN radio in San Antonio.

All this hoopla is inconsequential to Bohn at Skyline Chili, where the bib works in your favor. Especially when you’re headed to meet Cincinnati President Santa Ono in less than an hour.

Few know that Ono, the bowtie-wearing Baltimore native, was considered for the Texas job that ultimately went to Gregory L. Fenves last year.

Under Ono’s leadership, Cincinnati has broken enrollment records three straight years, the latest total pushing it close to 45,000. He turned down the chance to live in a university-owned, 5,700-square foot condominium. The school sold the property for a cool $1.75 million and turned it into a $3 million endowment for first-generation college students.

Those who work with Ono say he’s not a prototypical “sports guy,” but he loves Bearcats athletics. A framed photo of Ono crowd surfing hangs in his office. In January 2013, he agreed to publicly shave his head if the men’s basketball team won 10 straight games. They did, so he did. The moment helped raise money for the Dragonfly Foundation, a local charity.

Ono, an accomplished researcher of eye disease, now has his eyes focused squarely on joining a Power 5 conference, be it the Big 12, Big Ten or whichever. If Cincinnati ever joins a major conference, Ono will be a key reason why.

Ono goes to great lengths to say the school is a “proud member of the American Athletic Conference.” But he also knows the Bearcats are 90-40 over the last decade and have played in nine bowl games. That includes the Orange and Sugar Bowls. Oklahoma, meanwhile, is 104-30 during that same span and Texas is 86-43. Both the Sooners and Longhorns appeared in national title games, too.

As for whether the school should join a major conference, Ono said, “The Univeristy of Cincinnati deserves it. We’re not saying, ‘Please, please, please let us in. Oh, we’re going to get there.’ We’re already there in many different respects.”

The social-media conscious president (@PrezOno) knows his constituency. That’s why Ono has been active in communicating with various Big 12 leaders about his school, its research capabilities and, yes, its sports programs.

Nippert Stadium, located smack in the middle of campus, is the second-oldest active football field in the country. In 1923, UC football player Jimmy Nippert sustained a puncture wound and later died from blood poisoning. His grandfather, James Gamble, provided funds to help finish out the stadium. A monument to James Gamble Nippert was dedicated on Nov. 8, 1924.

The listed capacity is 40,000, a number that probably scares some Big 12 administrators. That’s after an $86-million renovation in 2015 that included new suites, club seats, a press box and various upgrades that are frankly mandatory in today’s arms race.

If that capacity worries Texas and Oklahoma folks, Cincinnati officials will offer to play those games in Paul Brown Stadium, home of the Cincinnati Bengals. The Bearcats and Sooners played there in 2010. Attendance was 58,253.

“I don’t believe that those who have maybe contrary views or condescending views know anything about the University of Cincinnati.” Bohn said.

Are those people making assumptions? “No question,” Bohn shot back.

The Bearcats operate on a $60 million athletic budget, Bohn said. About one-third of that comes from subsidies, including student fees. For that, students get into all athletic events for free. But the school has deep-pocketed boosters willing to help. According to USA Today’s database, the Bearcats had $52 million in revenues during the 2014-15 school year.

“I don’t know if the general population in Texas or somewhere might know that,” said Larry Sheakley, a go-to Cincinnati donor. “But university presidents are surely clued into what we’ve been doing over the last 10 years or so.”

Oklahoma president David Boren is open to discussing Cincinnati, as emails released in February indicate. West Virginia’s Gordon Gee is a loud proponent of expansion, too. Texas’ Fenves has stayed mum, mostly because expansion triggers questions about whether UT would ever give up the Longhorn Network.

A vote for expansion would require a 75 percent majority. Eight of 10 league schools must say yes.

Asked whether Big 12 presidents are aware of what’s happening at Cincinnati, Ono said, “They’re very intelligent, discriminating individuals. They have a pretty good idea what the relative strength of different institutions are.”

BUILDING UP THE FACILITIES

UC, as the school is known locally, also means Under Construction.

After factoring in construction costs and debt service, Cincinnati will spend $122 million to pay for the Linder Athletic Center, a one-stop shop for the entire athletic department.

Cincinnati is about to embark on an $87-million renovation of Fifth Third Arena, pending final approval by the board of regents in June. The proposed changes, which include permanent bowl seating, club suites and better locker rooms, would turn the place into a NBA-style venue.

Judging from the promotional video, Cincinnati will have a basketball arena that will embarrass Texas’ Erwin Center and Oklahoma’s Lloyd Noble Center by the 2018-19 season.

“If the Bearcats are considered the highest level of basketball (in Cincinnati), this investment and this arena certainly reflects that,” said Brendan Foreacre, senior associate athletic director who oversees facilities.

Anyone from any Big 12 school who visits this campus will see the baseball stadium, track facility, locker rooms and weight rooms are all up to snuff.

Men’s basketball coach Mick Cronin grew up in western Cincinnati — the “blue-collar side.” While he’s excited about the future, Cronin understands what’s driving the decisions.

“I’ll tell you this: Nobody cares what I think,” Cronin said. “I say that with a smile, but I’m well aware that it’s true. I coach the ball that’s round. For me and all the people who think about that round ball, we follow the oblong ball.”

Cincinnati’s oblong ball coach knows what high-level facilities should look like. Tommy Tuberville spent 14 years in the SEC and three at Texas Tech before heading off to Cincinnati in 2013.

“I look at every job from a head coach’s perspective of two things — (administrative) support and being able to recruit players from a hundred-mile radius,” Tuberville said. “If you can do that, you can survive in college football.”

Given that Indianapolis, Columbus and Louisville, Ky., all fit that 100-mile description, Tuberville feels just Cincinnati’s future is just fine. “You’ve got everything here to compete with anybody in any league.”

UC’s past five recruiting classes have produced 123 signees — 98 of those were 3-star recruits, according to 247Sports’ composite rankings, 23 were 2-stars and two others didn’t register a star rating. Those classes have ranked 71st, 68th, 64th, 63rd and 51st nationally.

Doug Rosfeld, Cincinnati’s director of player development, taught high school history and social studies for 13 years before coming back to his alma mater. He played center for the Bearcats from 1997-2000.

“When people have been making the sales pitch, they’re making the pitch off a burgeoning television market or first-class research institute,” Rosfeld said while steering a six-seat golf cart through campus. “All those are true. But the most significant thing is the city of Cincinnati has always had this unique spirit of individualism and really, to be honest with you, the spirit of the Texans.”

In November 1835, a group of Cincinnati businessmen agreed to build two six-pound cannons specifically for Texas’ war against Mexico. The group came to be known as the “Friends of Texas.”

The cannons were built at the Eagle Iron Works foundry just off Walnut Street in downtown Cincinnati. Nowadays, the Coffee Emporium sits there, cranking out lattes.

The “Twin Sisters” were shipped down the Mississippi River to New Orleans and arrived in Galveston in April 1836, one month after the Battle of the Alamo. George Washington Hockley controlled the artillery and used the cannons in the Battle of San Jacinto, the signature moment of the Texas Revolution.

Some on the Cincinnati campus believe one Power 5 conference will fire the next realignment shot. A cannon blast from the SEC or Big Ten could leave the Big 12 far more than “psychologically disadvantaged,” as Boren has said. When will that happen?

It could be only a matter of time.

“I don’t think this thing’s over with,” Sheakley said of conference realignment. “It just seems like to me something else is going to happen here. When it happens, you better be ready. When the music stops, you don’t want to be caught short.”

Big 12 expansion: Adding a conference title game is about more than the money

Big 12 expansion: BYU aims to be conference’s pick to click