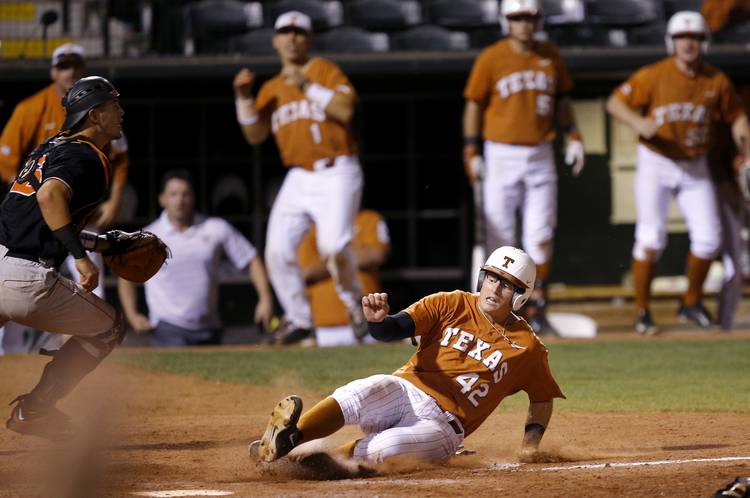 OKLAHOMA CITY — It’s too early to say with any certainty, but there might be something special happening with the Texas baseball team this week.

Consider that entering the Big 12 tournament the Longhorns had not had a game in which every member of the starting lineup hit safely. Now, it’s happened twice.

And consider Patrick Mathis, who is — let’s put this politely — a work in progress in right field, erased a double in the gap in Friday’s second inning with a spectacular diving catch that checked in at No. 3 on SportsCenter’s top plays.

But more than anything, consider the improbable eighth inning. Left for dead following Oklahoma State’s seven-run sixth, Texas dusted off itself and countered with a nine-run retaliation to stun the Cowboys, 12-8.

“They trumped it with a nine-spot, which is hard to believe, but they did it,” OK State coach Josh Holliday said.

There’s no questioning the fight of this squad, which will need plenty of it to beat TCU twice on Saturday and keep its title hopes alive. The first pitch is set for 12:30 p.m., and a thin bullpen awaits behind starter Connor Mayes. On the other side of the bracket, Oklahoma is looking to score a pair of wins over West Virginia.

With its season obituary all but written, Texas delivered an alternate ending in the eighth against closer Tyler Buffett. Trailing 8-3, Travis Jones led off with a double to left. Bret Boswell drew a walk, and Kody Clemens reached on an infield error to load the bases. The next four at-bats produced a run each, cutting the deficit to 8-7.

Buffett’s night was over, and his replacement, Michael Mertz, couldn’t throw strikes and walked Tres Barrera and Kacy Clemens before hitting Jones to tie the score.

After yet another pitching change, Texas plated four more runs on Boswell’s two-run single to left and Kody Clemens’ two-run triple to the gap in right-center.

Boswell, who wasn’t expected to play much this week, is instead having an outstanding tournament. Since replacing shortstop Joe Baker late in Wednesday’s loss to OSU, he is 4-for-8 with four runs scored. He had three RBI on Friday and had his first multi-hit effort since the Texas A&M game on March 15.

“It’s been a struggle this year and it feels like I’m putting everything together now,” Boswell said.

In all, the bottom half of the eighth produced nine runs — the most UT has scored in an inning — on five hits, three walks, and an error. This was the Longhorns’ first win after trailing after seven innings; previously, they were 0-22.

This had to have been sickening for OSU, the second seed, which a day earlier had an eerily similar outcome when it gave up nine runs in the eighth to TCU.

“Shocking the number of big innings in this tournament,” Holliday said.

On Thursday, Texas put up seven runs in the seventh against Baylor. A day earlier, Holliday’s squad dropped eight runs in the fifth on Texas.

For a while, Friday’s rematch was unfolding similarly to the first meeting. Texas led 3-1 through five innings before disaster struck once again. Starter Kyle Johnston gave up two singles and was lifted for Nolan Kingham, who gave up two more singles for two runs. With two outs, Barrera caught Conor Costello in a rundown at third, but Costello ended up making it home safely when he went well beyond the base path to avoid Barrera’s tag. Barrera slammed his helmet to the ground, arguing he indeed applied the tag, and reliever Chase Shugart restrained him from going after home plate umpire Mark Winters.

Following Collin Theroux’s RBI double on the next at-bat, Barrera turned to Winters and yelled some more, eliciting a warning.

In total, OSU scored four runs after the controversial play, including on an error by Barrera for throwing high to third on a stolen base.

“Tough play, but the umpire didn’t play a factor in the game because we won,” Barrera said.

Big 12 expansion: BYU aims to be conference’s pick to click