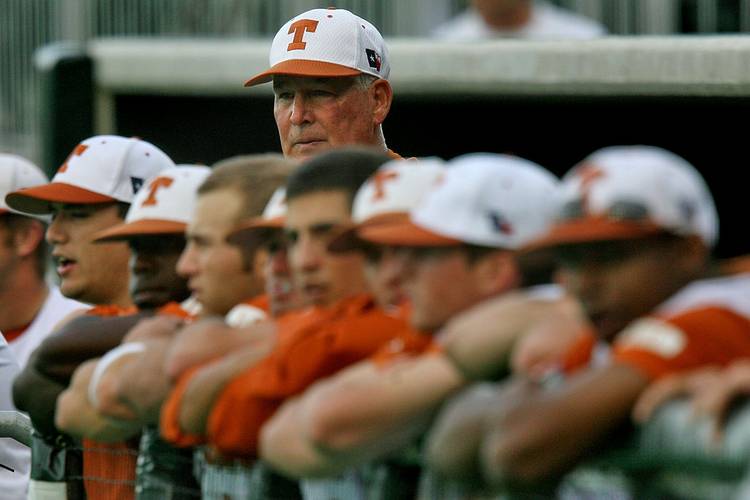 Augie Garrido provided plenty of memories for Texas baseball fans over his 20 years with the Longhorns.

What was it like to actually cover Augie Garrido?

Some of the American-Statesman staff that worked closely with college baseball’s winningest coach shared their thoughts and memories:

CANTU: SHORT, TO THE POINT, FULL OF WIT

Augie taught me a lesson during his first interview as Texas’ head coach, in 1997. The press conference was packed with reporters, UT officials, coaches and fans. It didn’t take Augie long to show his creative wit — at my expense.

I remember asking him a question — I can’t remember what it was — but it was a long-winded and rambling one. It probably took me 30 seconds to get the words out. His response? “Yes.”

It seemed like everyone erupted in laughter, and my face must have turned five shades of red.

In Augie’s first season, he often used rodeo terminology in post-game comments. Maybe to show the locals he’s a real Texan — “We got thrown off the bull,” “when you fall off a horse, you gotta get back on,” and “sometimes the bull wins, sometimes the cowboy wins.”

It felt like I got bucked off the horse the day I met Augie. From that point on, all of my press conference questions have been short and to the point.

Augie Garrido seemed to view life through a different lens than so many coaches, and his unguarded approach often induced me to laugh and smile.

I attended a launch party for the Longhorn Network on campus in August 2011, hoping Mack Brown would hand me a scoop on who would start at quarterback. Brown politely declined, but Garrido came through that night in his own politically incorrect way.

Sitting on stage ready to be interviewed by Kevin Dunn or Lowell Galindo, the fun-loving Garrido saw ESPN sideline reporter Erin Andrews (and “Dancing With the Stars” competitor) out of the corner of his eye. “Hey, Erin,” he yelled, “wanna dance?” I think she smiled.

Another time, Garrido, facing a larger gathering of media than usual before practice at the Disch, stood in front of TV cameras and said something like, ‘What did I do? Did I get arrested again?,” referring to his 2009 DUI episode.

After the Longhorns were eliminated from the 2011 College World Series, he patiently answered questions from reporters. A UT athletic department official offered Garrido an escape, reminding him that the team bus was waiting.

Garrido ignored him and kept talking.

AUTULLO: NO JOKE, AUGIE HAD THE RIGHT TOUCH

Sensing his player was trying too hard, Augie Garrido called time out at last year’s Big 12 tournament and pulled Tres Barrera aside for a chat. Later, Garrido revealed to reporters that he had not given Barrera any hitting advice at all, but instead had loosened him up with a dirty joke.

Naturally, Barrera returned to the batter’s box and ripped a liner to beat Baylor.

Later, in a private moment, I pleaded with Garrido to tell me the joke, which I can’t repeat beyond disclosing that it involved a wedding night, a bowling ball and a toilet bowl.

Garrido is a masterful communicator, so I have a difficult time subscribing to the idea that in recent years he was no longer able to connect with the modern ballplayer. For whatever reason, the wins dried up, but the memories and the laughs, they never will.

It was less than an hour before the first pitch of the College World Series title game in 2002, and beat reporter Rick Cantu and I were sitting in the Longhorns dugout chewing the fat with Augie Garrido.

Garrido was fiddling with his lineup and was wondering who he should insert into right field, and asked my opinion.

“Chris Carmichael,” I said. “I like his left-handed bat against the South Carolina right-hander, and he’s got a quick bat.”

When we climbed to the Rosenblatt Stadium press box later, we saw the lineup Garrido posted. There he was — Carmichael, who had started just 16 games the entire season and none in almost a month.

In the fifth inning, Carmichael turned on an inside fastball and rifled a three-run homer over the right-field fence to push Texas’ lead to a commanding 7-2. The Longhorns went on to win, 12-6, Garrido’s first national title at Texas.

The Longhorns had beaten Rice in the CWS opener and Stanford twice before crushing the Gamecocks with a timely homer from a sportswriter’s hunch, though I bet Augie was probably going to start Carmichael all along.

GOLDEN: A FINE MAN COACHING IN A CRUEL GAME

Texas’ season ended in Omaha in three of my four years as the beat writer. My first meeting with Augie came before the 2003 season. After we exchanged introductions outside the dugout, he began to explain his philosophy of baseball in great detail.

“This game is so much bigger than what happens between the lines,” he said. “It’s a metaphor for life, a game of failure. It can be a cruel game, man.”

I told my dad that night that I had just met a coach who’d spoken for an hour without using one cliché. “That man is a legend,” Dad told me. “You will have fun covering his team and you might just learn something.”

My dad passed on April 4, and one of the first texts I received came from Augie. That he would take time in one of the worst seasons of his Texas tenure to pass along a condolence, well, it meant a lot to me and said a lot about the man.

Dad was right. I learned a lot from Augie. And had fun, too.

Big 12 schools and expansion: What’s in it for them?