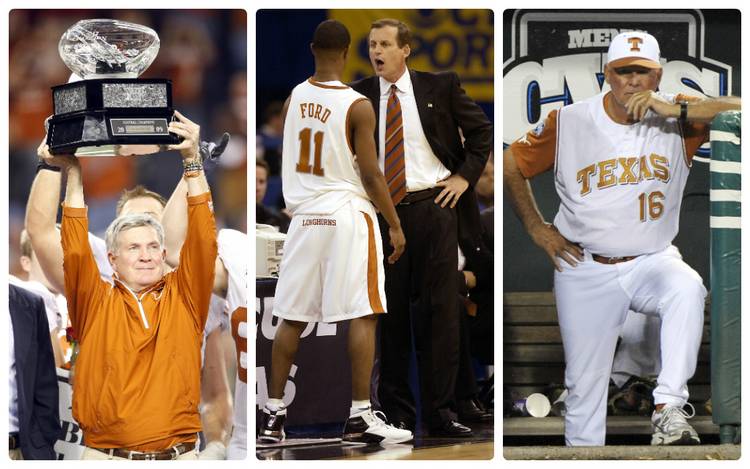 Everybody remembers their first day at a new job.

That day proved to be the dawn of one of the most successful eras in Texas athletics history. Starting with the 2001-02 year, UT’s three main sports collectively won at least 75 percent of their games for five straight years.

When Brown, Barnes and Garrido reached the peak of their profession, it was one hell of a ride.

“It was fun. We had a lot of success and it was fun to celebrate it,” Faulkner recalled in a phone interview Tuesday, the day after Garrido was removed from his head coaching duties after his 20th season. By the time Faulkner left the Tower — he stepped down only 27 days after Texas beat USC to win the 2005 national football championship — the Longhorns’ athletic program had once again become a college sports behemoth. Garrido had won two national titles. Barnes led the Texas men to the 2003 Final Four, and Brown clinched the school’s first national title in 35 years.

“DeLoss was in my office for another meeting about a week before I left,” Faulkner said. “I remember when he left, I said to him, ‘Man, if I were you, I’d quit. It’s not going to get any better than this.’ It was something that we both had a laugh about.

“But there’s no question that we did have a good run in that period. That run extended beyond. DeLoss did have some really good days after that.”

That dynamic era ended officially on Monday when Garrido was the last of the four major athletic figures to leave his post.

Dodds retired in November 2013. Brown gave way to Charlie Strong after the 2013 season. Barnes opted to get fired instead of change his assistant coaching staff after the 2015 campaign. Shaka Smart took over the men’s basketball program last season. A new baseball coach is forthcoming.

“Trails end, baby. They all end,” Garrido said after his team was eliminated from the Big 12 baseball tournament last Saturday. He exits as the winningest baseball coach in NCAA Division I history with 1,975 wins.

Brown, Barnes and Garrido all entered at times when the Texas fan base was tired of losing or just aggravated with mediocrity.

Garrido, the first of the three hired, was a known quantity when he arrived from Cal State Fullerton. But he was replacing another UT legend in Cliff Gustafson. Many questioned whether the California-cool Garrido was the right choice after UT posted a losing record in 1998.

“I get excited about what is going to happen,” Garrido said at the conclusion of that dismal 23-32-1 campaign. “Therein lies the joy, knowing that this is in the near future.”

Four years later, there was Garrido, sitting in the interview room at old Rosenblatt Stadium after knocking off South Carolina to win the 2002 College World Series. “I present to you the national championship,” Garrido said with incredible pride. He won it again in 2005.

Football fans were over the moon in 1996 when John Mackovic led the Longhorns to the first Big 12 title. It was the polar opposite in 1997, however, after Texas stumbled early against UCLA, getting blown out 66-3. Three sets of goal posts came down that season after teams upset Texas. Mackovic was summarily dismissed.

Brown, with his down-home charm and mesmerizing people skills, was the new coach hired away from North Carolina encouraging fans to “Come Early, Be Loud, Stay Late.”

“He will absolutely fit well in Austin, Texas,” Dodds said in December 1997. “That was some of the decision. … We need to put our different constituencies back together. We need to pull for Texas in good times and bad.”

Tom Penders and his Runnin’ Horns produced some exciting moments inside the Erwin Center. But controversy engulfed Penders during the 1997-98 season, which ended with a 14-17 thud.

Barnes arrived from Clemson with a tough-love approach that wore some players down while others thrived. With Barnes on the sideline, the Longhorns became an aggressive bunch that opposing fans loved to hate.

“Teams need love. But to be highly successful, you’ve got to understand: It’s hard. It’s not easy,” Barnes said on his first day on the job. “Every team wants to be successful, but there’s a price you have to pay and we’ve got to do that in a lot of different areas.”

New chancellor Bill McRaven has brought some stability to the UT System Board of Regents. Despite having just one year on the job, Fenves has won high marks for his handling of various campus issues. Perrin has calmed the rough waters left in former athletic director Steve Patterson’s wake.

Now, many Texas fans are ready for Strong, Smart and a new baseball coach to get back to the business of winning. And winning big.

“Where one era comes to an end, then a new era gets built up,” Faulkner said. “I think it’s very important as the new era is assembled, it gets built on people. You have to have absolutely top-quality people I think to build a really successful new era. That’s in any aspect of an institutions life.”

Texas softball: Why are the Longhorns missing out on the state’s top pitchers?