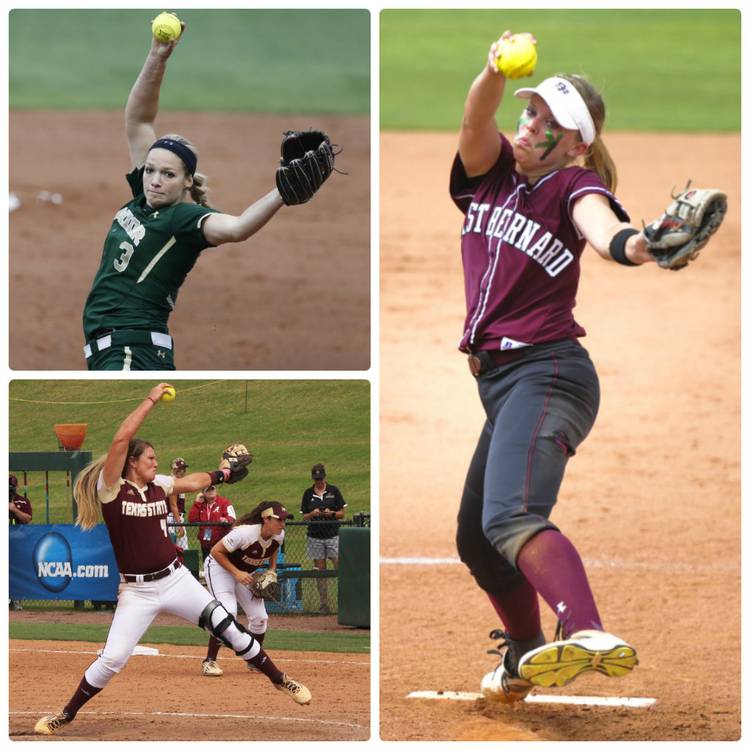 At last year’s UIL state softball tournament, East Bernard’s Samantha Show — the state’s 2013 Gatorade player of the year — pitched a championship game gem, leading her Brahmas to the Class 3A title at the University of Texas’ McCombs Field.

Earlier that day, Show was announced as the 2015 Gatorade winner, too.

The game was played in Texas softball’s backyard, yet Show ended up signing with Texas A&M. In fact, the last three state players of the year — Show, Mont Belvieu Barbers Hill’s Randi Rupp and Lewisville Hebron’s Heather Sterns — all pitched at the state tournament. The Longhorns didn’t sign any of them.

Show just completed her freshman season at Texas A&M, having pitched the Aggies past Texas in the Lafayette Regional, which ended the Longhorns’ season. Rupp, who signed with Texas State, has finished in the top five nationally in strikeouts her first two seasons. And Stearns, who grew up idolizing Cat Osterman and dreaming to someday pitch for the Longhorns, has been a two-time All-Big 12 player for Baylor.

Show, Stearns and Rupp went 4-1 this season against Texas.

How did Texas, which hasn’t had an All-American pitcher since Osterman and Blaire Luna, miss on those three Gatorade players of the year?

Because of an NCAA rule, Texas softball coach Connie Clark can’t step outside her office to recruit the state’s top talent playing on the Longhorns’ own field. The NCAA calls this time of the season a dead period for recruiting. Like this weekend, when the state tournament falls at the same time as the Women’s College World Series in Oklahoma City, the NCAA sees it as a recruiting advantage. So Clark stays away.

Like in other sports, college softball recruiting begins much earlier in a player’s life than it used to. Some of them begin to be recruited as early as 12 years old. Clark said she and her staff doesn’t “have the opportunity to build relationships like they used to with in-home visits.”

Show committed to A&M in the fall of her freshman year of high school. Stearns, who committed to Baylor as a sophomore, wasn’t recruited by the Longhorns. Rupp, who played on the same select team as current Longhorns pitcher Erica Wright, did receive some initial recruiting interest from Texas, but said that interest dropped off after Texas offered Wright a scholarship.

“To me, that’s as good as signing a letter of intent,” Clark said. “It’s an integrity thing. I’ve had that happen to me, where a player committed and then another school came in and snagged her out from under me, and it’s not a good feeling.”

Show, who began her high school career at Pearland before transferring to East Bernard, where she made state tournaments in 2014 and 2015, acknowledged that because she committed early, other programs — though not all of them — likely stepped away.

“I was barely a freshman when I committed. I think that turned a few schools away,” Show said. “It didn’t stop some. I know Oklahoma and Alabama came to look at me in high school, but I wanted to go to A&M from the start.”

Stearns, who grew up a Texas fan, signed with Baylor in November of her senior year, two years after she committed to the Bears.

“I looked up to (Osterman),” Stearns said. “My family would make the trip to the Women’s College World Series to watch Texas’ games, so yeah, I dreamed about playing for the University of Texas. Who didn’t?

“But I think it was around middle school and then on into high school, Texas was no longer a school of interest for me, so I don’t know if I’d had listened if they did show interest.”

Rupp, whose pitching coach with Texas State is Osterman, does wonder what would have happened had she ended up at Texas. She committed to Texas State as a sophomore.

“I started getting interest when I was in eighth grade, which is crazy,” Rupp said. “It’s so common now to be recruited in middle school. The trouble with that is, at that age, I didn’t even know if I wanted to play college softball. When I look back on my recruitment, I was nowhere near the pitcher I was in my later years in high school after I had already committed.”

Clark said that because of that rush to get commitments from players at younger ages, along with the fact that players are signing with schools in the early signing period of November — months before they throw their first pitch of their senior seasons — it’s hard to determine if a player will develop the way schools hope.

“When you’re recruiting players, you have to also look at the academics and hope they also develop academically,” Clark said. “We do our best to make sure we’re getting as much information as we can before we make an offer so it’s not a total crap shoot. Have we missed on a couple of kids because they haven’t started high school yet? Yeah, we have.”

WHERE HAVE THE TOP PLAYERS GONE?

Since the Texas Gatorade player of the year award began in 1998, there have been 15 players honored. Thirteen of those 15 have been pitchers, and all but one honoree ended up signing with a school inside the state. Texas, with six signees, leads the way — three of them, however, ended up transferring away from UT after their second year.

Big 12 schools and expansion: What’s in it for them?