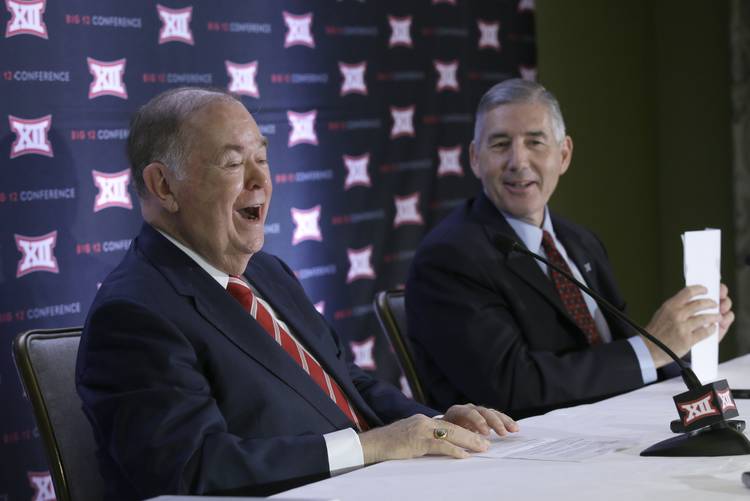 A football championship game is good, but the concept of a league-wide television network is dead.

And while the issue of conference expansion isn’t completely dead, nothing will happen anytime soon.

Presidents gave unanimous approval to restart the Big 12 football championship game for the 2017 football season. The league held title games from 1996 through 2010, but stopped after Texas A&M and Missouri left for the Southeastern Conference, knocking the Big 12 down to 10 schools. This January, The NCAA changed its rules to allow for 10-team leagues to stage a championship game.

The other four so-called Power Five conferences all hold title games. Big 12 commissioner Bob Bowlsby said the data indicated that by adding one, the league could see a 14-percent bump in its chances to get a team into the College Football Playoff.

“If you had seen the presentations from our consultants — both in terms of our competitive advantage from a championship game and the financial advantage as well — you would have found those presentations compelling, as I did,” Oklahoma president David Boren said.

Boren said a championship game could add approximately “$27-28” million to the league’s coffers. That would only fatten the Big 12 distributions. The league announced a new record distribution of $30.4 million to each of its members. Newcomers TCU and West Virginia each received a full share.

Bowlsby said the 10-team league could split into two divisions, but how that would be done remains to be seen. Even in a two-division format, the league would likely keep its round-robin scheduling.

No decisions on game sites were made, although it’s believed Arlington’s AT&T Stadium or Kansas City’s Arrowhead Stadium would be considered.

ESPN will air the championship game in odd-numbered years; Fox will get the broadcast in even-numbered years. The agreement runs through 2024. “We have a lot of details to work out,” Bowlsby said.

Boren has been the Longhorn Network’s most vocal critic. However, he’s now faced with the economic realities of the marketplace. ESPN and Fox are both struggling to keep pace financially while losing subscribers to so-called “cord cutting.”

“The marketplace is simply not interested in a traditional network,” Boren said. “There’s no reason for us to continue to fight one way or another on something that’s not going happen.”

Boren was emphatic about the presidents’ desire to continue examining expansion. Bowlsby confirmed a CBS Sports report from earlier in the week that detailed a wrinkle in the Big 12 contract. Should the league expand, it would trigger a clause where all league members would receive a pro-rata bump in its revenue.

“I don’t think we need anymore phone calls or material in the mail,” Boren said. “I think that every member in the conference is well aware of all of the schools that have expressed interest.”

Thanks to the Longhorn Network, Texas will continue to lead the conference in annual revenue. Think about this: The Longhorns took in $45.4 million in the Big 12’s payout and LHN revenue before the school accepted a single ticket or donation. The athletic department had projected to take in a total of $183 million in revenue for the fiscal year.

One year later, Gregory L. Fenves is now ‘up to speed’ on Texas athletics