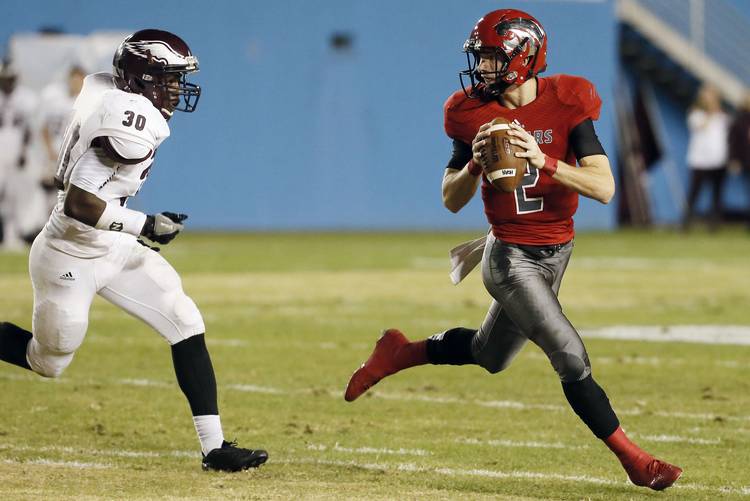 That’s no longer the case. Former five-star QB Kyler Murray butted heads with Kevin Sumlin in one season at Texas A&M and decamped for OU in December. Then this past week, the Big 12 passed a rule to reinstate the year of eligibility Baker Mayfield lost when he transferred to OU from Texas Tech.

So when Robison gets to Norman next year, there will be some obstacles he didn’t foresee; Murray will be a sophomore, Mayfield a senior. Also lingering will be 2016 signee Austin Kendall of North Carolina.

But don’t count out the big-armed Robison, who sits in seventh after day one at the Elite 11 Finals and ranks highest among the six Texans who showed up to the 24-person event. The top 12 finishers will qualify for The Opening in Oregon where they’ll battle to be the Elite 11 MVP.

“I feel like I did pretty good,” Robison said on Friday. “My group’s really good. We were all throwing the ball really well.”

Robison, the nation’s third-ranked pro style QB and the No. 12 player in the American-Statesman’s Fabulous 55, never received a scholarship offer from Texas, his parents’ favorite school, which instead prioritized Westlake’s Sam Ehlinger. Robison’s favorite school, Texas Tech, didn’t come through with an offer, either.

“I like the coaches at Tech and I love the program and my left tackle (2015 recruit Conner Dyer) went there,” Robison said. “I would have considered, but they never offered me.”

So he decided to leave the state and plans to enroll early at OU, which is cleaning up in the Lonestar State with commitments from four additional 2017 recruits — offensive lineman Tyrese Robison (McKinney Boyd), safety Robert barnes (Southlake Carroll) and receivers Jalen Reagor (Waxahachie) and Charleston Rambo (Cedar Hill). A third receiver, Richmond Foster’s CeeDee Lamb, de-committed from the Sooners in late April.

Coming off of an appearance in the College Football Playoff, the Sooners have put together a 13-player class that ranks second nationally to Ohio State.

“A lot of the players who committed have a family bond already and we’re working together,” Robison said.

Robison said he’s not affected “at all” by Mayfield returning in 2017 and actually views it as a positive.

“I feel like that’s good for me because I’ll be able to get up there and be there for a year and a half and then I’ll get to compete with Kyler and Austin Kendall.”

Elite 11: Kellen Mond moves on from Baylor after Briles firing

Elite 11: Despite winning award, Sam Ehlinger on the bubble to advance