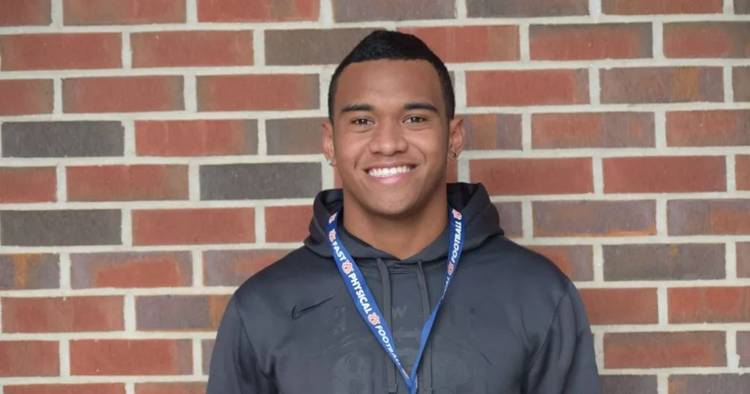 Tua Tagovailoa, the nation’s No. 2 dual-threat quarterback from Honolulu, is a Alabama commit. He impressed at the past weekend's Elite 11 competition.(Chris Kirschner/AJC)

REDONDO BEACH, Calif. — To many, this will be painful to read: Alabama’s next quarterback was the consensus top performer at the Elite 11 Finals.

College football’s national champion got even richer with left-hander Tua Tagovailoa dazzling spectators over three days with one bullet pass after another. No one could argue at the conclusion of the event when he received the award for top arm strength after Tagovailoa completed all but a couple of passes in Sunday’s 7-on-7 drills.

“He had the strongest performance of the past three days,” Elite 11 coach Trent Dilfer said.

This came after Tagovailoa was so shaky at regionals that Dilfer was “really concerned with inviting him.” More on Tagovailoa’s rapid improvement in a bit, but first … Alabama? Really?

Nothing about Tagovailoa, of Honolulu, makes one think of Alabama, either the state or the Crimson Tide football program. The nation’s second-ranked dual-threat QB, Tagovailoa bucks the preferred ‘game manager’ Alabama coach Nick Saban covets behind center. At 6 feet, 1 inches, he’s also shorter than what one thinks of in a typical SEC quarterback.

And then there’s his heritage. The thought was Tagovailoa would join the long line of Samoans and Hawaiians to play in the Pac-12. He is a friend of Tennessee Titans quarterback Marcus Mariota (Oregon) and his family has roots in the same Samoan village as UCLA assistant coach Marques Tuiasosopo, who played at Washington.

So it came as a surprise on May 2 when Tagovailoa announced his commitment to Alabama, whose town of Tuscaloosa is a 12-hour non-direct flight from Honolulu. Tagovailoa, a devout Christian, said he sensed a connection with the church-going community and also wanted to make a decision that defied conventional thinking.

“A lot of the pacific islanders go to the Pac 12 schools, and I’d like to thank each and every one of them for opening up doors for our people in the Pac 12 and on the west coast,” Tagovailoa said. “But I just kind of wanted to be different and open up a new door. My perspective was why not do it at the best school, and I felt Alabama was the best school.”

Dilfer said that heading into the week Tagovailoa was not among the top 15 participants and seemed a long shot to earn one of 12 bids to The Opening next month in Oregon. Two weeks earlier, Tagovailoa worked out at regionals and, according to Dilfer, “had no concept of playing from under center, progression reading, and all of the stuff we ask at this camp.”

The final rankings are to be released Monday morning, and Tagovailoa will probably be somewhere around the top five.

“He’s made the biggest jump in three days that I’ve ever seen,” Dilfer said.

Elite 11: Despite winning award, Sam Ehlinger on the bubble to advance