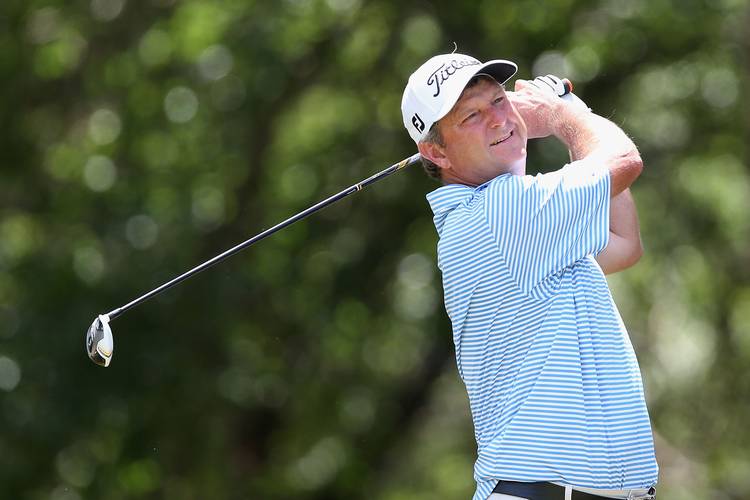 Wes Short Jr. hits a tee shot on the fifth hole during the third round of the 2014 U.S. Senior Open Championship at Oak Tree National on July 12, 2014 in Edmond, Oklahoma. (Photo by Christian Petersen/Getty Images)

Wes Short Jr. is just plain tired. At 52, his body doesn’t respond to 5 a.m. wakeup calls like it used to. Not many do.

Back pain nearly ended his golfing career. From 2009 to 2013, Short figures he didn’t even touch a golf club for two year-long stretches. The pain was so unbearable, he flew to Germany for a procedure even he admits wasn’t FDA approved.

“The two tournaments as a kid you always putted to win was either the Masters or the U.S. Open,” Short said during a phone interview Tuesday. “It took a long time to get out here, but it’s finally going to happen. I’m tired, but very excited.”

Short caught an early flight Tuesday to reach Philadelphia from Powell, Ohio, site of one of 10 U.S. Open sectional tournaments across the nation. Before playing in the Open, Short hopes to do well at this week’s Senior Players Championship at Philadelphia Cricket Club.

Statistically, Short’s career is now taking flight here in his 50s — giving incredible hope to those back home at Jimmy Clay Golf Course.

Short made his PGA Tour debut in 1997 but didn’t play the major circuit regularly until 2001. His high-water mark came in 2005 when Short won the Michelin Championship and pocketed just over $1 million in winnings that season.

Short said he played in three events in 2009 but withdrew from the final tournament with back pain. From that point on, it wasn’t clear if Short would ever see competitive golf again.

Once the pain subsided, Short got busy making up for lost time. He made an 8-foot eagle putt to win the 2014 Quebec Championship as a Champions Tour rookie and now has 17 top-10 finishes in the last three years.

“The other thing is people don’t realize just because we’re getting older doesn’t mean we don’t have that competitiveness,” Short said. “We’ve been competitive ever since we were kids. Just because you lose a little bit of distance and maybe a little on your putting, your competitiveness never goes away.”

Hossler on hold: Texas junior Beau Hossler’s dream of turning pro may now be on hold after suffering a shoulder injury during the NCAA championships in Eugene, Ore.

The injury kept Hossler out of the championship match against Oregon and forced him to withdraw from U.S. Open qualifying.

“I have not made a decision,” Hossler said via text on Tuesday. “I will be exploring opportunities in the coming weeks, and will gather the info necessary to make a decision. Nothing yet.”