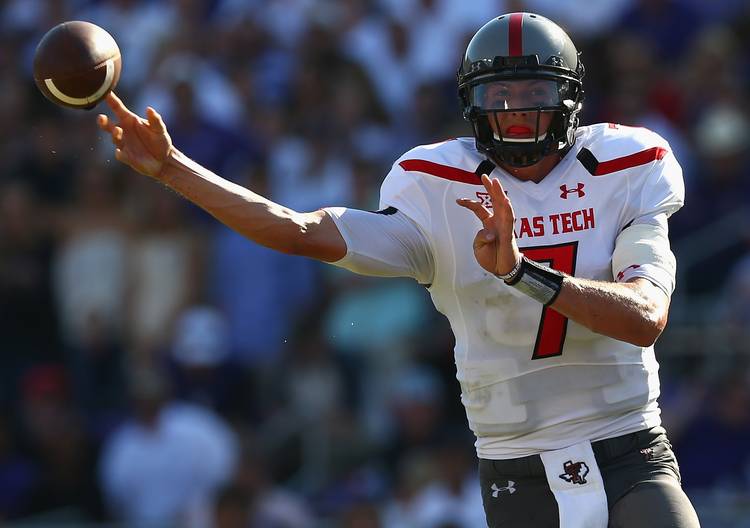 Davis Webb, when he was playing at Texas Tech, throws the ball against the TCU Horned Frogs at Amon G. Carter Stadium on October 25, 2014 in Fort Worth, Texas. (Photo by Ronald Martinez/Getty Images)

REDONDO BEACH, Calif. — The only Big 12 team Davis Webb never played against when he was the quarterback at Texas Tech was Texas.

In 2013 he was the backup to Baker Mayfield, and two years later he sat behind Patrick Mahomes. Injuries kept Webb out of the 2014 meeting in Lubbock.

So with one final shot this fall, Webb is eager to remove the Longhorns from his list. His new team, Cal, hosts Texas in week three on Sept. 17.

“That’s a team I grew up watching,” Webb told the American-Statesman at the Elite 11 Finals on Sunday. “Colt McCoy is my all-time favorite college quarterback. It’ll be a fun first home game for us, for me ever at Cal. They’ll be really good on offense with Coach (Sterlin) Gilbert bringing that stuff over. Coach (Charlie) Strong has the program going. They had some young guys playing last year. I know how good they were and they’ll be better this year.”

Webb, who opens the season against Hawaii in Sydney, Australia, is among an impressive crop of quarterbacks Texas could face in 2016. The list also includes the two quarterbacks for whom Webb has been an understudy: Mahomes and Mayfield, who ended up leaving Tech and now enters his second season as the starter at Oklahoma.

But before he gets a crack at Texas’ young defense, Webb first must win the opening at Cal, which was last held by Jared Goff, the first overall selection of the Los Angeles Rams in the NFL Draft. Goff can tell Webb all about what it’s like to play against Texas after he tossed three touchdown passes in last year’s 45-44 Cal win in Austin. Longhorn fans might recall that the outcome was in doubt until UT kicker Nick Rose missed an extra point with about a minute to go.

Goff, who has relocated to the Los Angeles area, where the Rams have moved to from St. Louis, stopped by Redondo Union on Saturday and had a good chat with Webb, an Elite 11 counselor whom he has known since the two were high school participants at the event in 2012.

In researching various transfer spots, Webb reached out and tapped Goff for intel on Cal which under the coaching of Texas Tech graduate Sonny Dykes improved its win total the past three seasons from one to five to eight. From the outside, it looks like a perfect marriage with Golden Bears’ new offensive coordinator, Jake Spavital, installing an Air Raid offense similar to the one at Tech, where Webb threw for 5,547 yards with 46 touchdowns in 23 games.

Webb, of Prosper, Texas in the Fort Worth-Dallas Metroplex, originally committed to Colorado before being inundated with interest from roughly 20 major programs interested in the top graduate transfer quarterback of this offseason. He credits Goff with providing “huge help in the process.”

“We’ve kept in touch the past few years,” Webb said. “Both of us played as true freshmen and had ups and downs. When I started looking at other schools, he was one of the best (resources). I started getting information from him because he’s been around Cal and knew what they’d be next year.”

To get acclimated to his new surroundings, Webb said he’s been getting to the Cal football facility at 6:30 a.m. and staying until 5 p.m. After missing spring practices, he needs to play catch-up to compete with sophomore Chase Forrest.

“I have one year to do this and I want to make sure it’s the best year of my life,” Webb said.

His seizing every opportunity was evident Saturday night when Webb hung tough through chilly conditions to work out at the Elite 11. After each of the 23 high school participants had completed a passing drill, Webb stepped forward to do the same and ripped one throw after another. Like a headlining band, his performance captivated and was the most impressive of the evening.

By then, the other college counselors — Clemson’s Deshaun Watson, Notre Dame’s DeShone Kizer and USC’s Max Browne — had left for the hotel.

“I wanted to give the people a little bit,” Webb said. “All of the cameras were on me. It was exciting.”

At 52 and pain free, Wes Short qualifies for U.S. Open