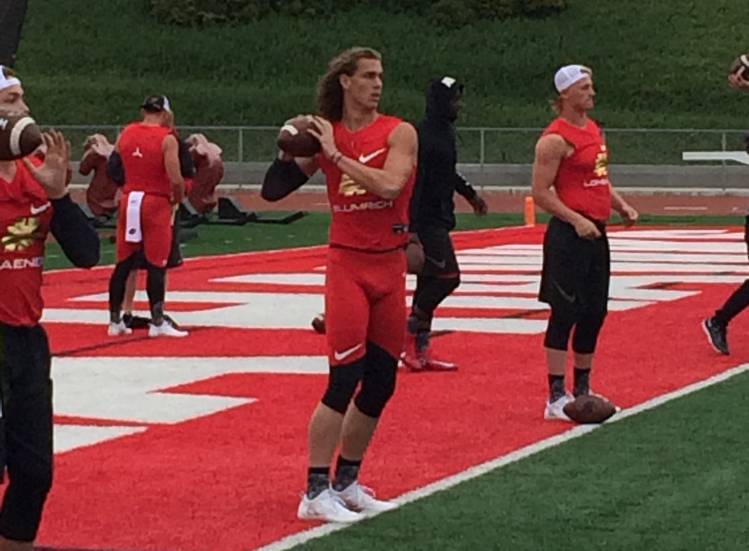 Connor Blumrick, a three-star prospect and the nation’s No. 44 pro-style quarterback, committed to Texas A&M in May.

REDONDO BEACH, Calif. — Considering who made up his peers at the Elite 11 Finals, it was easy to feel a little sympathy for Texas A&M commitment Connor Blumrick.

Among the 24 participants at the passing invitational was the player Blumrick replaced in the Aggies’ recruiting class, Tate Martell, the nation’s top dual threat prospect. To make it even more uncomfortable, Blumrick, of Pearland, also went up against a handful of players A&M is pursuing to perhaps replace him.

In Kevin Sumlin’s quest to correct a quarterback room that has been reduced to tatters, Blumrick, a three-star prospect and the nation’s No. 44 pro-style quarterback, is stuck somewhere in the middle.

According to 247Sports, A&M has not stopped recruiting quarterbacks in the wake of Blumrick’s May 20 commitment and in the coming days has plans to bring to campus three other Elite 11 quarterbacks: Baylor decommit Kellen Mond, who will play his senior season at IMG Academy in Florida after transferring from San Antonio Reagan; California’s Jack Sears, who was among the top performers at the Finals and secured an invitation to The Opening next month in Oregon; and Florida’s Mac Jones, whose interest in A&M took an unexpected turn on Tuesday when he flipped his commitment from Kentucky to Alabama.

Sears says he’d like to make a decision by July. Mond, who is also considering Auburn and Ohio State, has announced a similar deadline. Blumrick will be standing by with anticipation.

Activity coming out of College Station suggests Sumlin is intent on signing more than one quarterback in the 2017 class following a tumultuous offseason in which he replaced his offensive coordinator and parted ways with three bluechip quarterbacks — Martell, a 5-foot-10 dual threat play-caller from powerhouse Bishop Gorman in Las Vegas, and 2015 co-starters Kyle Allen and Kyler Murray. For a quick fix, Sumlin turned to Oklahoma transfer Trevor Knight, who is known best for getting smitten with pop star Katy Perry and for leading the Sooners to a win over Alabama in the Sugar Bowl three seasons ago.

Blumrick, the state’s No. 133 prospect, was not among the 12 quarterbacks at the Elite 11 to score an invite to The Opening, but he did have some some bright moments, flashing accuracy and decent arm strength. Of the six Texans who worked out at the three-day event, the 6-6, 203-pound Blumrick ranked somewhere in the middle.

“I don’t think I should be underrated,” Blumrick said before Saturday’s pro day drill. “I just want to go out there and show them what I can do.”

Blumrick’s relationship with A&M is still fresh and started to intensify when the Aggies rebooted their quarterback search after Martell de-committed on May 4 over poor communication with new offensive coordinator Noel Mazzone. At the time, Blumrick was mulling over offers from Ole Miss, Texas State, Memphis and McNeese State. A relative novice at his position compared to other Elite 11 participants, Blumrick did not begin playing quarterback until his freshman year. As a sophomore, he switched to receiver and caught passes from his brother, Jake, who is a redshirt freshman at Stephen F. Austin. The younger Blumrick is entering his second season as the starting quarterback at Pearland, where he teams with three-star athlete Debione Renfro, who last week committed to A&M.

“It seems like the perfect place, so I went there,” Blumrick said. “Once Mazzone got there, he told me the plan, and I’m ready to go.”

At 52 and pain free, Wes Short qualifies for U.S. Open