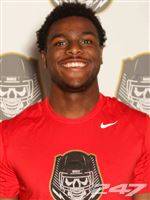 REDONDO BEACH, Calif. — Changing high schools can be difficult for a teenager, but let’s not rush to throw Shawn Robinson a pity party.

His new school, DeSoto, is positioned to take proper care of Robinson, a TCU commitment, with offensive linemen ticketed to Texas, LSU and Missouri, and receivers pledged to Tennessee and Colorado.

Yeah, the new kid should be all right this fall as the Eagles’ quarterback.

“New team, new everything,” Robinson told the American-Statesman at the Elite 11 Finals. “Going to be exciting to see what we do this year.”

Robinson, who spent the past two years at Denton Guyer after attending Fort Worth Chisholm Trail as a freshman, found himself on the move once again this spring, when he followed his mother to DeSoto, where she was hired to be the girls basketball coach. Additionally, Robinson’s father accepted a position on the Eagles’ football staff.

Things should be fun in week two of the football season, when Robinson’s past and present collide in a marquee matchup between DeSoto and Denton Guyer.

If the nomadic Robinson appears to be a little wishy-washy, consider that on June 26 he will have been committed to TCU for a full calendar year. In this day and age of mercurial recruiting whims, Robinson has never wavered, and he appears to be a lock to play for Gary Patterson and the Horned Frogs.

At this time a year ago, Robinson was the only quarterback in the 2017 class whom Texas had offered a scholarship before the Longhorns turned to Westlake’s Sam Ehlinger, who made that decision look good by outperforming Robinson at the Elite 11 and earning an invitation to The Opening next month in Oregon. In the Statesman’s Fabulous 55 rankings of the state’s top players, Ehlinger (10th overall) is the top quarterback followed by Oklahoma pledge Chris Robison (12th) and Robinson (19th).

Naturally, Robinson is eliciting comparisons to former TCU multi-dimensional quarterback Trevone Boykin, who directed a renaissance of the Horned Frogs’ offense and led the team to double-digit win totals in each of the past two seasons. Passed over in the NFL Draft, Boykin is currently working out with the Seattle Seahawks.

When asked about any similarities to Boykin, Robinson, whose positive traits appear to include humility, will only say, “I hope so.”

Based on his Elite 11 performance, Robinson — as a passer — possesses the same tendency toward inaccuracy that plagued Boykin in his first two seasons at TCU. Despite Robinson flashing arguably the strongest arm of anyone in the 24-man competition, it was anyone’s guess where his passes might end up. His greatest struggles came in Saturday’s pro day drills as he airmailed several throws and never found a groove.

Robinson, who ran for more than 3,000 yards combined over the past two seasons, admitted to being out of his comfort zone in the passing-only competition, which favored pocket passers like Davis Mills (Stanford) and Myles Brennan (LSU). In that regard, Robinson reminds some of UT quarterback Jerrod Heard, Robinson’s predecessor at Denton Guyer. Heard, who was up-and-down in 10 starts last year, has the running thing down to a science but needs some fine-tuning in regard to short and intermediate throws.

“But I like this,” Robinson said of the Elite 11 setup, “it gets you ready for future challenges — the NFL, combine, stuff like that. It’s good to have that in the repertoire.”

Tasked with fixing Robinson’s deficiencies at the next level will be TCU quarterbacks coach Sonny Cumbie, who, as you may recall, put fans on edge across much of the state this offseason, when he considered an offer to become Texas’ offensive coordinator. Possibly concerned about the long-term job security of Longhorns head coach Charlie Strong, Cumbie turned down the offer and Strong turned to Tulsa’s Sterlin Gilbert.

“My whole family did,” he said. “He’s just a real dude. It’s very rare finding someone as genuine as he is. That would have sucked. Thank God he stayed.”

Baseball opening is making others money, but will the Longhorns also hit the jackpot?