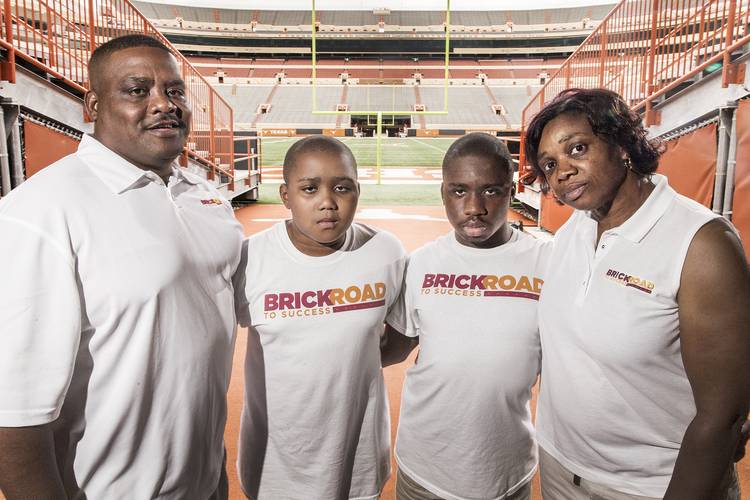 Brick Haley poses with his sons and wife at the Darrell K. Royal–Texas Memorial Stadium on Thursday, May 26, 2016. From left Brick Haley, Jeremy 12, A.J. 16 and Tina Haley. Texas defensive line coach Brick Haley is hosting the annual Brick Road to Success golf tournament on June 24 in Gadsden, Ala. Haley's foundation raises money for autism awareness, which hits home for the father of 16-year-old A.J., who was diagnosed with autism several years ago. RICARDO B. BRAZZIELL/AMERICAN-STATESMAN

If Texas turns around its football fortunes and starts scoring bundles of points, the autistic son of Longhorns defensive line coach Brick Haley will be running for cover at Royal-Memorial Stadium.

Jarring sounds rattle A.J. Haley, so he’s no fan of the boom that shoots out of Smokey the Cannon after Longhorns touchdowns.

A freshman at Round Rock High, A.J. bucks many of the behavioral trends associated with autism. He easily shows affection. Academically, he is well-rounded and not a whiz in one particular area. Growing up, he acted like other boys his age until he started showing repetitive behavior and was diagnosed with autism at about the age of 8.

Still, as for many others afflicted by autism, loud noises are excruciating for A.J. So instead of shielding his ears at games A.J. seeks asylum in his father’s office in the football building and kills time playing games on the computer.

“The thing it has taught me as a football coach is to be a heck of a lot more patient than I’ve ever been,” Haley said. “He’s taught me how to deal with a situation I never thought I would be able to.”

Those who follow Haley on Twitter are familiar with his tweets about autism awareness. Lately, he’s been plugging the third annual golf outing his foundation, Brick Road to Success, will put on June 24 in Haley’s hometown of Gadsen, Ala. Proceeds will benefit the advocacy program, Autism Speaks.

Though he admits to having a “pitiful” golf game, Haley makes up for it by being a fine salesman. Among the big-ticket items he generated for a silent auction are autographed football helmets donated by Pittsburgh Steelers coach Mike Tomlin and five-time Pro Bowl cornerback Patrick Peterson of the Arizona Cardinals. For financial contributions, Haley has shook some prestigious trees, including that of his lifelong buddy, New York Giants general manager Jerry Reese.

“I try to not hit up the same people every year,” Haley said.

A workhorse in corraling Texas’ prized 2016 recruiting class, Haley tapped into the relationships he built while coaching at LSU from 2009-14 to help land four signees from the Bayou State, including defensive tackles D’Andre Christmas-Giles and Gerald Wilbon.

Then within days after national signing day, Haley’s name surfaced in connection with a position at Texas A&M. Haley, 50, has a strong relationship with Aggies defensive coordinator John Chavis tied to when they worked together at LSU. After several days of speculation about his future, Haley opted to stay at Texas for a significant pay raise, but seeing his salary more than double to $495,000 annually was not the only reason he hung around.

A.J. let it be known he wasn’t ready to leave.

“Moving is tough on kids, but being special needs is even tougher,” Brick said. “It takes them a while to get comfortable with people and to make friends. Then to pack up and leave is really, really tough for them.”

Haley’s wife, Tina, said her son’s resistance to relocating for the second time in a year was “absolutely” a deal-breaker in regards to leaving for A&M.

A.J., 16, is part of the general population at Round Rock High, but, as with others with autism, he’s enrolled in courses that involve minimal use of language. He’s a good athlete but would rather watch movies and can recite scenes from his favorite animation flicks like Princess and the Frog, Chicken Little and Kim Possible. On the first day of an animated film’s release, you won’t have to look far before finding A.J. at the local movie house. He’s something of an actor himself and had a small role in a recent school play, How to Succeed in High School Without Really Trying.

With her husband pulling 15-plus-hour days to make a good living, Tina, who has a doctorate degree in educational administration, has been free to stay at home and care for A.J. since shortly after his autism diagnosis around 2010.

The hope is A.J. will be able to attend college, but if that isn’t to be, Tina said she would like for him to be self-sufficient and maybe pick up some vocational training along the way.

Whatever he does, it probably won’t involve football. His dad has accepted that reality.

“It’s like another job, but it’s a beautiful thing,” Brick said. “When you have an opportunity to reach him and you can see him grow, that in itself is worth every bit of time that you spend.”

Baseball opening is making others money, but will the Longhorns also hit the jackpot?