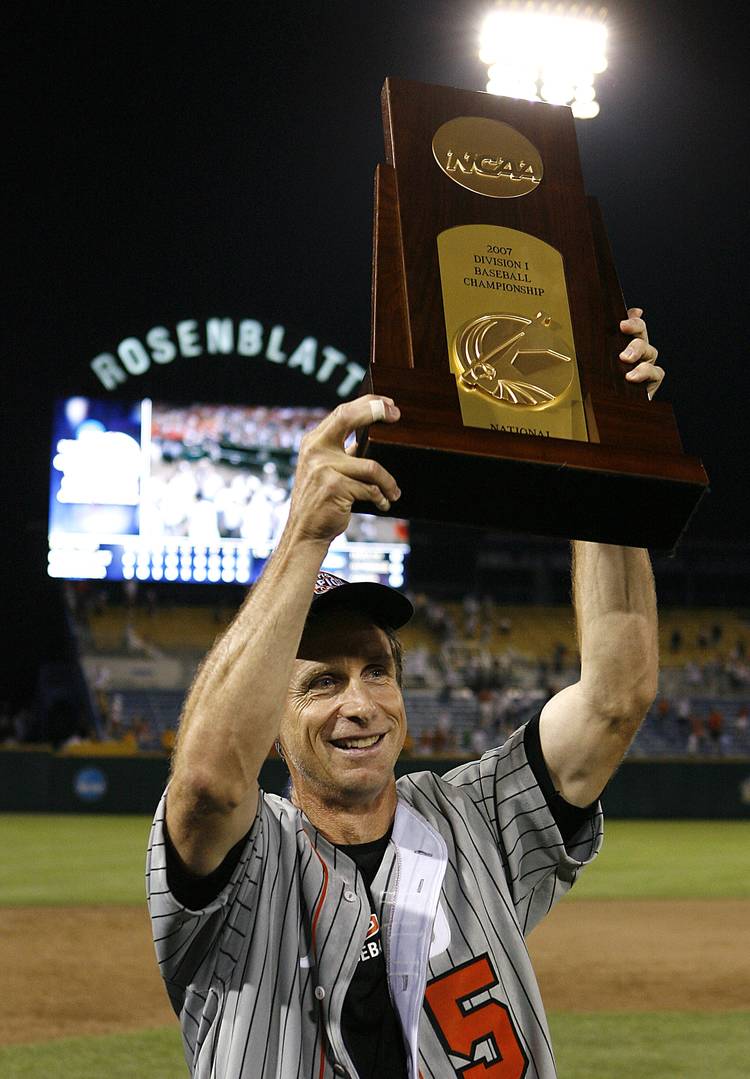 Texas has narrowed the search for its next baseball coach to a candidate with a couple of national championships on his résumé.

Oregon State’s Pat Casey, who Baseball America honored as the coach of the decade in the 2000s — one spot ahead of former UT coach Augie Garrido — is a leading target for the Longhorns’ opening, according to a source familiar with the search.

Casey, 57, just wrapped up his 22nd season at Oregon State, where his teams have gone 789-440-5 with national titles at the 2006 and 2007  College World Series. His annual salary comes in at a shade under $1 million, making Casey one of the game’s highest paid coaches.

If Texas cannot find marriage with Casey, it could turn to another west coast coach in UCLA’s John Savage, who led the Bruins to the national championship in 2013. Other coaches who could emerge as candidates include Tulane’s David Pierce and Oklahoma State’s Josh Holliday, who a source says has generated interest for the opening at Alabama. Holliday, an alumnus of Oklahoma State and the son of former Texas pitching coach Tom Holliday, coached the Cowboys to a pair of wins over South Carolina to secure their first College World Series appearance since 1999. In four seasons, his OSU teams have never finished below second in the Big 12.

Casey is the second known candidate Texas has reached out to along with Florida’s Kevin O’Sullivan, who rebuffed the Longhorns to stay in Gainesville for more pay and promises of facility upgrades. Virginia’s Brian O’Connor, TCU’s Jim Schlossnagle and Louisville’s Dan McDonnell also have received pay raises since Memorial Day, when Texas reassigned Garrido to an administrative job.

It’s unclear if Casey would be willing to leave a position he’s held since the 1995 season. However, postseason snubs each of the past two seasons could have him feeling uneasy about how others view his program. This year, the NCAA selection committee denied OSU of a regional berth despite the Beavers finishing with a RPI of 44th, which was just one spot behind fellow Pac 12 school Arizona State, which was placed as the second seed in the TCU regional. It snapped Oregon State’s seven-year streak of making the NCAA postseason.

Casey’s team was ranked fifth entering this season before injuries wiped out his three weekend pitchers. Still, OSU finished tied for third in the Pac-12 and went 35-19 (16-14). Filling in for the Friday night role was right-hander Travis Eckert, of Austin High, who went 6-4 with a 3.28 ERA.

The postseason exclusion came one year after the committee drew Casey’s ire by shipping away OSU, the Pac-12 runner-up, to the Dallas Baptist regional. Prior to the Beavers’ opening-round match up against Texas, which it won 5-4, Casey told reporters he found it “very odd” the committee did not select OSU to host a regional.

Before Texas identifies Casey as its top choice, it’ll need assurances he’s up to the task. In 2011, he considered stepping down from coaching for an administrative role at Oregon State.